This week, Ike sat down and wrote out his Christmas wish list.

AND I COULD READ IT.

It wasn't perfect, but it was a far cry from past writing efforts that I couldn't make heads or tails of, and would even stump him when he tried to remember what he meant by words like LOUUOB or WOEABL. 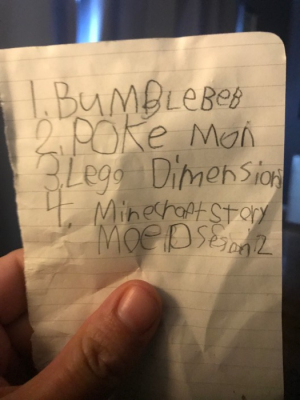 Ike loves loves LOVES his reading program. I'm pretty pleased with it as well, because...look at that! "Dimensions??" Are you kidding me?

(He's asking for a Bumblebee, Pokemon cards, a new Lego Dimensions disc because ours got scratched and doesn't work anymore, and Minecraft Story Mode Season 2. Ezra's list asks for a computer, a diary WITH A LOCK, and "12 pairs of pants.") 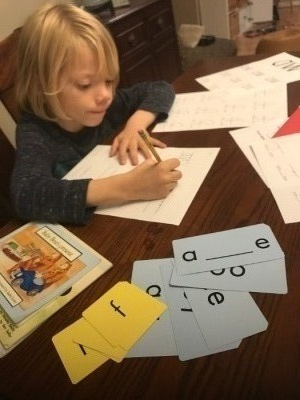 Meanwhile, his school STILL has not completed the assessments or made any changes to his IEP. His general education teacher is doing what she can, but it looks like official supports and services won't happen until next semester. 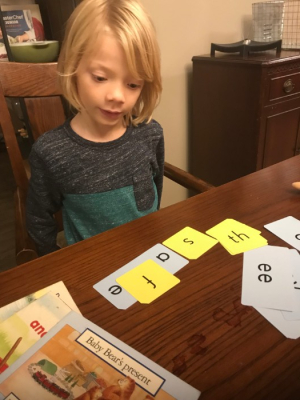 So I'm very glad we're making progress on our own. We went with a newer program called SpellRead, which claims to be able to essentially rewire a dyslexic brain to process language and text using a more efficient path. (Basically a right brain/left brain thing. There's a lot of science and brain scans and the NIH but also PRIZE BOXES FULL OF BEANIE BABIES.) It seems to be really clicking for Ike. 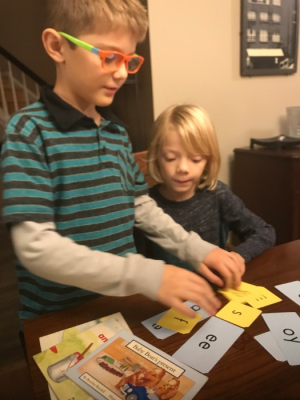 The other day we were in the car and Ike suddenly pointed at a store sign and shouted, "Hey look! That sign says MAX!"

And indeed it did. And it hit me. He's never, ever done that before. He couldn't even read the signs before. 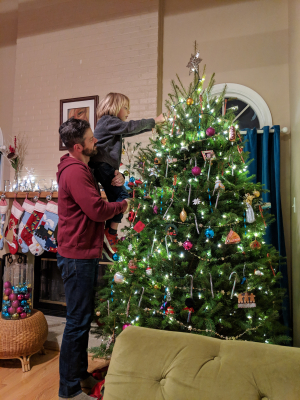 He just needed a little boost.

Wonderful! Great work Ike! Fantastic that you guys got him identified and found good resources so early. ❤️

Look at successful Ike! Way to go all of you.

I’m just sitting over here, getting a little teary because your kids are awesome but also you guys are amazing supportive parents.

LOVE. Also I LOLd at Ezra wanting 12 pairs of pants hahhaa. I needed that :)

You just need a little boost, through these dark days, too. Jason's arms are strong! This post makes me so happy for Ike and all of you -- please keep fighting.

Twelve pairs of pants that fit me would be the best present ever. I think he's onto something. So happy to hear about Ike's progress! The schools can move at such a glacial pace, it's great you were able to start helping him right away.

OMG that last photo is totally making me tear up!! Like chopping onions in picture form. So happy for Ike!

My heart might burst from joy for this little guy!!! I can't imagine what it was like for him to not understand the world around him in such a basic way and now it is all clicking for him! Reminds me of when color blind people get those new glasses that allow them to see colors. Such an uplifting story! GO IKE!

I am so vicariously proud of Ike. And I am proud of you, too, for being able to get him to this point while managing all of your own brainstuff.

Fun Fact: Way back in the late 1960s, my mother wrote the first book for parents about dyslexia and children’s learn disabilities (The Shadow Children). There was a follow-up book some years later. She was a pioneer in the field when very few teachers or clinicians knew how to properly teach these amazing, smart kids.

Yay! So happy for Ike and you all too. I'm sure it must feel great that he can communicate so much better. I LOVE the Christmas list.

Amy, you really need to do some dusting in here and also, could you quit with the onion cutting when I am trying to read your blob. I am all verklempt ovah heah and tears may have been shed.
I can imagine this was kinda like Helen Keller felt when Annie spelled W-A-T-E-R into her hand. The things that are now open and accessible to Ike are now endless. Now he can thrive and move in step with his peers.
And now I think I shall go and happy dance for our Growing Up AND Reading Ike!

We all need a little boost!

I am still thinking about your post about your hair and sending you careful and appropriate hugs. xoxox.

I am not big on buying kids lots of stuff but I would buy that kid everything on his list and more! Positive reinforcement!

Good job Ike! And Ezra's "12 pairs of pants" made me snort/laugh out loud.

So, I've probably said this before, but Ike reminds me so, so much of my sister in the early elementary years. With dedicated parents (check), a strong therapist (check) and a teacher who tried amid an indifferent school, she eventually learned to read well enough. When she reads aloud, I'm reminded how hard it is for her brain. But, she has her PhD in physical therapy (lots of dense science reading there) and is a voracious reader for pleasure. Like I said, well enough. :)

I love everything about this post, and also you are amazing.

That is fantastic. Go Ike!

I'm a teacher and I have a 7th grader that I've been trying to get evaluated for THREE YEARS, but the sped red tape is SO cumbersome, our tiny district is so understaffed, and the parents are wonderful people but so in denial that it's been an uphill battle. I'm so happy for you that you are in a school system with the resources to meet everyone's needs, even if it means a bit of a wait to get everything set up.

So happy for Ike...way to go, bud! Deep breaths, mom & dad -- your boys will always flourish with your love!