Several New Things I Learned About Dogs This Month:

1) If you don't neuter a male dog, some very bad and unpleasant things can happen to him later in life! And to your house!

2) You know those monthly heartworm pills your vet is always up in your grill about? They are very super important!

3) Dogs can get their very own special form of the Zombie Pinkeye.

Poor Foster Dog, man. After getting the break of a lifetime last month, he has not really caught another one since.

So, to recap: Jake is about 8 years old and was never neutered. He still isn't, because he is currently heartworm positive and cannot go under anesthesia until he tests negative. He also cannot be listed as available for adoption until he's both negative AND neutered.

We knew all of these things when we accepted the foster placement, and we specifically requested a senior dog with treatable medical needs who otherwise didn't have a shot in hell at adoption from a shelter. So this isn't a post complaining about us having to deal with any of this shit -- but I just need to point out that FAT HOT HAM THIS IS PREVENTABLE SHIT. Vaccinate your pets! Spay and neuter your kids!

He arrived at our house with suspiciously crusty and goopy eyes, and a tendency to lift his leg against the furniture. That last habit didn't last very long, thank goodness, since his instinct to mark his territory was nowhere near as strong as his instinct to be a Goob Boi.

Which is why we didn't exactly know where the drips and drops and trails of blood were coming from, at first.

It was his penis. He was bleeding all over the place from his penis. So, so much dickblood.

(This blog just got flagged as kinky AF p0rn by sooooo many new places.)

So on top of everything else, Jake had an infected prostate (because NOT NEUTERED) and required a heavy-duty antibiotic. Plus several medications to prep him for the actual heartworm treatment, which he got on Friday. Two butt injections, total restricted activity so he's essentially quarantined in his crate in the guest room full time (which makes both Jake and Poppy very very sad). The second round of shots is in a month, then testing a month after that. If he's still positive we get to do it all over again! But yeah, those monthly preventive chews are such a pain in the ass, right? 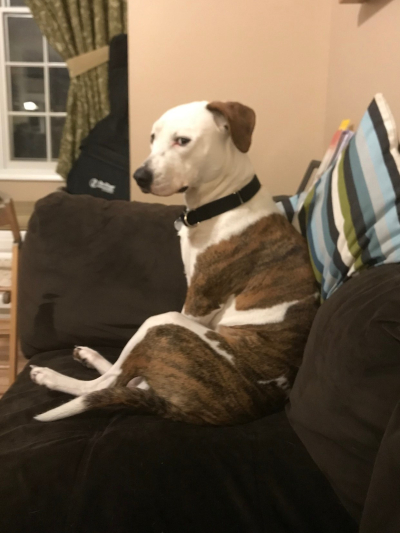 Poppy disagrees with that statement, and wants her new friend back.

His goopy eyes were diagnosed as KCS (aka dry eyes from the very depths of hell), and require an aggressive regimen of eye drops, ointments and serums. KCS is just One of Those Things some dogs get, but if he'd gotten some basic care earlier there's no reason why Jake's eyes would've gotten as bad and inflamed as they are now. (Corneal scarring, people.)

(The dosage instructions are straight out of a Monty Python sketch, by the way. This one is 2-3 drops twice a day. Another is 1-2 drops three times a day. Use this one last, keep this one refrigerated, that one is strictly to be given at bedtime, and only in his right eye; give this one on an empty stomach and that one with food. The steroid is 1/2 tablet every 12 hours for seven days, then 1/2 tablet every 24 hours for seven days, and then 1/2 tablet every OTHER day for 14 days, after that it's just eye drop, eye drop, antibiotic, spam, bacon, steroid, spam, spam, artificial tears, eye drop and spam.)

Also: BLOOD SERUM. Because it really is Zombie Pinkeye. 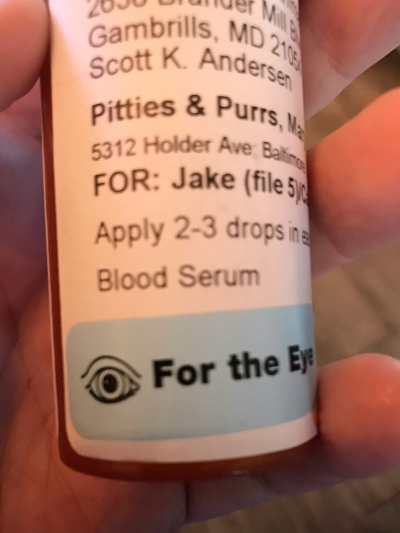 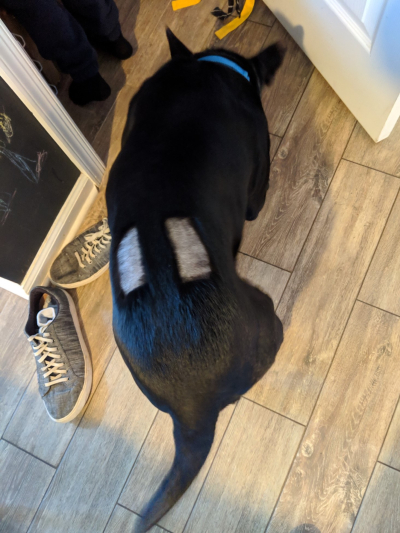 I know everybody keeps wondering why in the world and how can we not adopt him and c'mon #fosterfail #fosterfail, but well: If we knew we could afford to pay for the long-term care and complex medical needs of a senior dog, we totally would've just adopted a senior dog in the first place. But we can't! Not with seven other dependent living creatures living here full-time, at least. For Jake, his rescue takes care of all the vet bills, the meds, the food, whatever he needs. We just feed, dose, snuggle, repeat.

(Well, I do buy him plenty of extra treats and toys with my own money. This ain't some Petunia Dursley shit where Jake's the second-class Harry Potter dog or anything.)

(You can donate to Jake's care here, by the way, and they also have an Amazon wishlist of supplies.)

I skipped the Women's March this year in favor of a fundraising event on Saturday. (It was a chili cook-off. Jason and I both entered. Neither of us won but he thought that mine was totally the best and should've snagged first place. I am currently eating what's left of it and have to humbly agree.) After years of feeling so helpless and powerless to DO SOMETHING ABOUT EVERYTHING, helping this old dude has also been the best thing I've done for myself in a really long time. 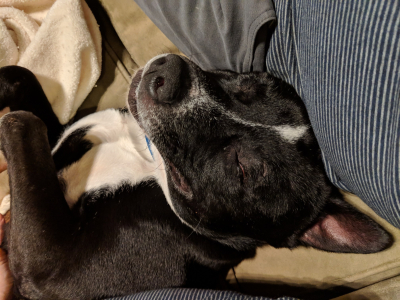 "Saving one dog will not change the world, but surely for that one dog, the world will change forever."

Our old man had to take steroids, and we literally had to draw up a chart to check off to keep track of just those...I can't imagine this craziness. Jake is very lucky to have you all helping him get healthy so he can find his furever home.

Oh dear this made me cry, AGAIN. What a good boy, and what a good human you are. <3

I love Jake as much as I love your boys and other fur kids, which is a ludicrous amount given that I’ve never met any of you. I am so, so happy that you’ve found a thing that makes you feel stronger. Much internet love (more p0rn!), ad always.

Jake is so blessed to have y’all- he is the bestest boy. If I didn’t live in a motorhome in Nebraska I’d be hard pressed not to adopt him. I love senior dogs so much.

Oh, and I made a donation for Jake’s bed.

I am so glad that you are here to love Jake and see that he finds the perfect furever home.

Just one comment about the bloody drips. Once his prostate infection is all cleared up, you might consider giving him saw palmetto. Dogs that are not neutered can also just have benign prostate enlargement that causes that kind of dripping, even without an infection. (My parents' old bird dog had this.) The saw palmetto helps with the enlargement and really did stop the dripping for our poor old boy. Just in case the antibiotics don't 100% do the trick.

Poor sweet pup! So very glad he has you and your family in his life!

Oh! You made me cry! What a sweet pupper and I'm so glad he has you! [And also, complete aside, I cracked up at your "Vaccinate your pets! Spay and neuter your kids!" line. Hilarious!]

Serta Dog bed. Had 3 of these for my three gimpy dogs and they lasted for freakin YEARS and they loved them.

Put the right sized one on your wishlist and I'll buy it for him. I can'r resist a gimpy.

"So, so much dickblood." LOL! You guys are so wonderful for doing this, and specifically for this type of dog. No matter what, he's getting the love and care he never got before and he will be forever grateful. He is definitely a Goob Boi.

And I'm guessing on top of this the antibiotics are wrecking havoc on his digestive tract. So glad he has someone loving him through this.

Spay and nueter your kids!

That made me laugh much louder and longer than it should have. I just pictured human kids not being allowed in middle school if they have not been.

UPDATE: Jake is getting a sweet-ass top-of-the-line dream bed, as are several other senior dogs, because y’all are amazing. Jake’s hips thank you!!!

Thanks for the recommendation Jenny! Ill get him that one.

My boyrfriend and I have been considering how we can help animals for a few months now and we haven't settled on the right thing for us. You just inspired me!! We've got 4 cats, 2 dogs, and we have talked about adopting senior dogs, but I wanted to wait until we had a bit more in savings set aside for it because: senior dog vet bills. But DUH, a woman I know runs a wonderful local pitbull rescue, perhaps we should consider fostering a senior dog. Amy, you're a genuis!

OMG, my last foster dog had a gravid spay and had bleeding afterward. She was a tiny thing, but I couldn't figure out where the few drops of blood were coming from for a day or two. Good for you for fostering, not foster failing means you can help another dog after this one.

Poppy being sad about Jake being away broke my heart a little. What sweet pups. I hope his medical issues clear up soon and he gets the best possible home, so Poppy can have even more foster friends.

DO IT ERIN DOOOOOO IT! 😈

I've been reading for YEARS (pre-Noah) and I don't think I've ever commented but now I have to, just to say...that was our old vet when we lived in MD!!! Husband is Navy, we were stationed in MD while he was at the NSA for a brief stint up until last summer...we adored that office. So glad that baby is getting the excellent care he deserves :)