Well, all that garbage aside, lots of things have actually happened! I got a foster dog! I turned 41! I cut my hair off! I took my kids on a boat! I went to a New Year's Eve party and talked to people! Then I lost my phone and found it the next day out on my street! I slammed my ankle (yes, that ankle, it's always the same damn ankle) in a car door! 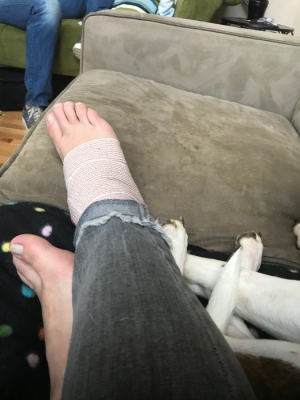 The biggest development (besides my swollen-ass ankle) is definitely Jake the Foster Dog, better known (by me and only me) as Goobs. He was found as a stray in Georgia and then spent an excruciating SEVENTEEN MONTHS being overlooked in a shelter.

This was him a week and a half ago, getting loaded up for transport. 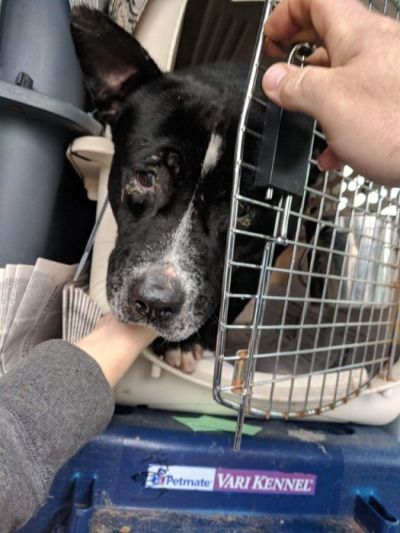 And this is him now! 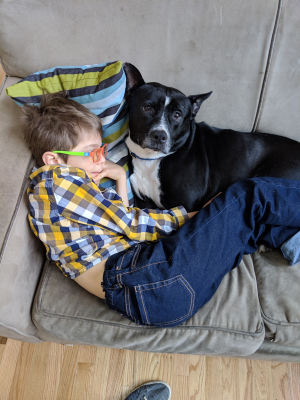 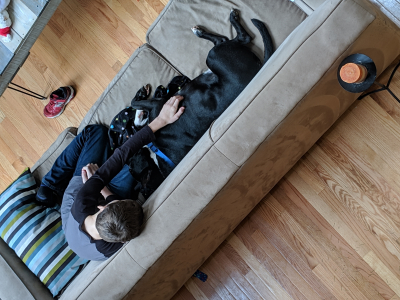 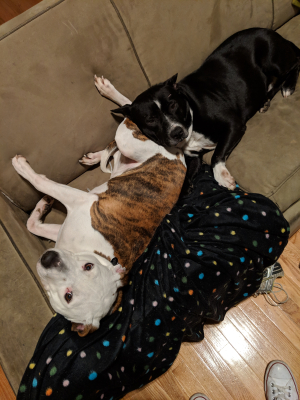 He's a sweetheart. He gets along very, very well with kids, dogs, cats and couches.

We think he's about 10, but he's really perked up as he's settled in and can get downright playful and butt-wiggly. Vet said he's in excellent health. He's starting treatment for heartworms (which were caught early) in a couple weeks and after that's cleared up he can be yours! Your couch is gonna love him. 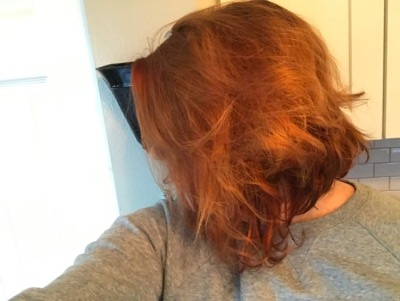 My new haircut, and my first not-super-amazing attempt at self-styling it. I'm getting better, though the non-ponytail/messy-bun life is a bit jarring.

(The color is at-home DIY henna, by the way! I finally got over my snobbery/terror of at-home color and I'm very glad I did! Also! What is with all the exclamation points!)

Noah's "big" Christmas request was to ride on a real ship of some kind. So we bought him a lunch cruise on a local tourist-y boat. It didn't come with proper tickets beyond an emailed receipt so I made this and wrapped it up for him: 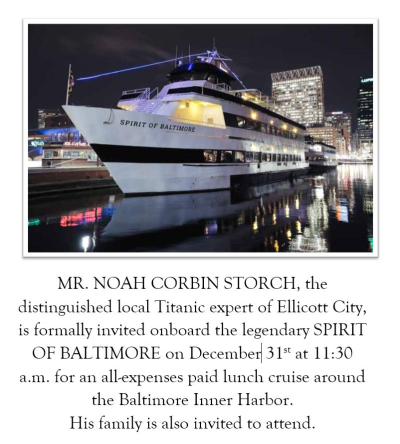 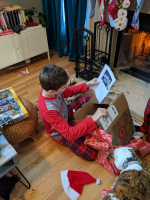 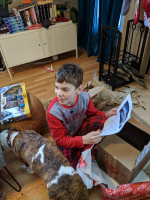 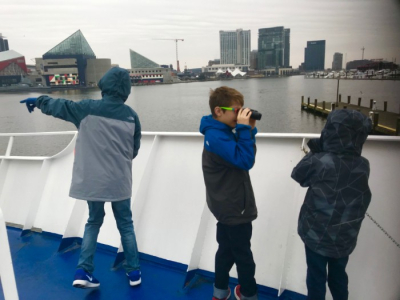 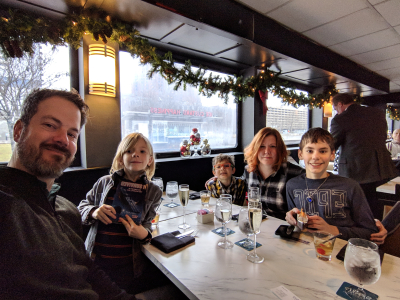 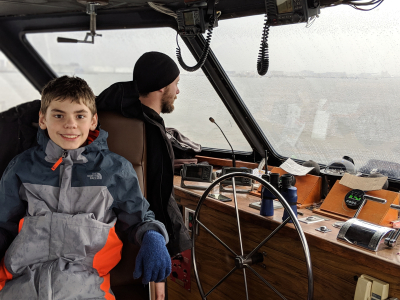 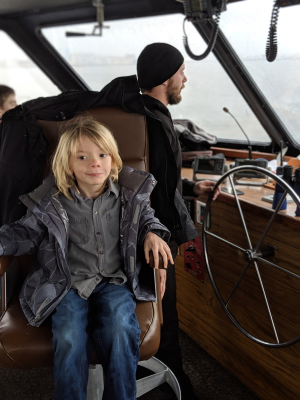 (We didn't get a good photo of Ezra in the captain's seat because he said he was seasick, He wasn't. He was just very, VERY excited about the buffet and anxious that the other passengers were going to eat all  of the dessert.) 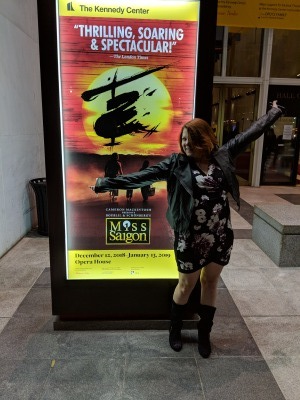 And also my birthday! I decided to ignore my injured ankle and wore boots with heels, so the next day I gifted myself with an X-ray at urgent care. It's just a bad sprain but it's important to treat yourself sometimes!

Your second photo of Noah looking at the ticket/invitation you made for him is making me choke up. Also I am 100% not a dog person but that dog looks so much happier in the after photo, bless you for opening your home to him.

Aw, the dog looks so incredibly happy! Bless you for taking him in! I don't think i could foster, because we would never want to give any of them up! :)

I bet you could get a free tour of the Coast Guard Cutter SLEDGE out of Baltimore some weekend. It's a construction tender. And maybe the crew could tell Noah about the CGC EAGLE, which is one of only two commissioned sailing vessels in the U.S. Armed forces (the other is the CONSTITUTION, which is a museum, whereas EAGLE is still an active ship).

Had me mobile after a bad ankle sprain pretty quickly.

I am a long time reader, and I just want to say that I think you are an angel. You have always amazed me with your wit and strength... and now you're a foster mom, and I think my heart just burst!!!!!! You are AMAZING.

Amy, you need to dust in here again! I am getting teary. Again. Plz and TY!
That pic of Noah opening his Proclamation is one for the ages! And I totally understand Mighty Zah's "seasickness" in the angst of not getting any dessert!
Jake is so lucky to have found you. Even though I don't believe for a minute that you are going to give him up!
Take care of that ankle. Again.

Wow, what a wonderful gift! It looks like it was such a fun time!

Hope the ankle is feeling better.

You look fantastic! Glad you're all doing well and happy :)

What a WEEK you're having! Jake looks like his name SHOULD be Goobs, and he is a very good boi big lovebug pupper. I'm so happy he's with you guys getting so much love. The difference in the before and after pics is testament to what fostering does for these wonderful animals. And I love that Poppy is under your foot giving you her extra special doggo healing powers in the first pic!

Dude, I feel Ezra. I'm gonna try that seasick excuse next time I'm worried about getting to the buffet late. (Even if I'm not on a ship.)

Every. Damn. Time. Happy tears! Welcome to 2019 and sorry we don't have a different President yet.

Thank you for everything (writing for yourself/for us, having a bit of a menagerie, managing - just managing <3). Goobs is very sweet and I hope you have no trouble finding him a furever home soon so you can foster out another one (or two). The hair color and style look lovely and a night out to Miss Saigon sounds wonderful.

Until next time, hugs,
-jeff

I am so sorry about your ankle, but glad it's not broken!

That pupper is the sweetest pupper. Look at him snoogling with everybody!!! How will you bear to give him up?

And Noah's face on Christmas!!! SO AWESOME.

If you ever take him to California, I believe the Cunard Queen Mary is docked there permanently and being used as a hotel.

Your hair is gorgeous!