Now that we're up to five humans, three dogs and two cats (plus two hibernating patio toads and hopefully some patio babies), it seemed like a good time to add yet another new member to the household. 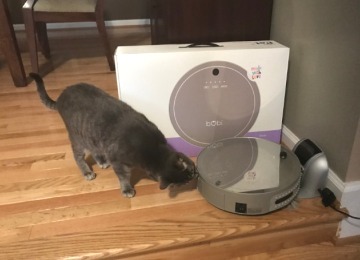 This is bObi, which Ezra and Ike decided is a girl because "we need more girls for it to be fair around here." They enjoy chasing after her and feeding her various bits of trash.

Noah simply calls it the Chore Robot (as in, "Chore Robot! Over here! I dropped the pencil sharpener again"), so between that and all the demands/verbal abuse our poor Alexa suffers, I am growing vaguely concerned about the patriarchal/anti-feminist future of our robot overlords. Maybe I should lend them my pussy hat.

ANYWAY, you can probably imagine the pet hair situation around here, plus my children all constantly shed, but instead of hair it's just straight-up dirt. They bathe and shower nightly, we take our shoes off inside, and yet the path leading away from Backpack Mountain and Discarded Coat Canyon (aka our foyer) always looks like a goddamn dust bowl just blew through.

And for the first time in a long time, it's something I 1) notice, and 2) give a shit about.

This week I rearranged the living room and kitchen cabinets, purged the junk drawer and fridge, and bought pretty new dish towels, house plants and a robot vacuum.

No, I am not “Marie Kondo-Ing.” I am “out the other fucking side of a 2.5 year major depressive episode-ing.”

I am (small voice) off both of my antidepressants (but am still medicated for anxiety and probably always will be), and I feel...really good. Great, even. I feel things again. I'm singing in the car and doing stupid dances with my kids again. I have energy and ideas and goals again.

(I also have like, 40 pounds to lose thanks to Lexapro, which was a literal lifesaver back in June but THANK U, NEXT is all I can say about it from a side effect standpoint.)

I'm still seeing my therapist, I'm still being super mindful and watchful and on high alert for any symptoms. (I typically get some seasonal bullshit in late March, around the anniversary of my dad's death, and I've been told to expect something similar once the attempt anniversary rolls around.)

But I'm also in a place where I can say, "You know what? Fuck all this sweeping and then forgetting to sweep and then feeling badly about the not sweeping. It's 2019, motherfuckers. Let's outsource this shit." 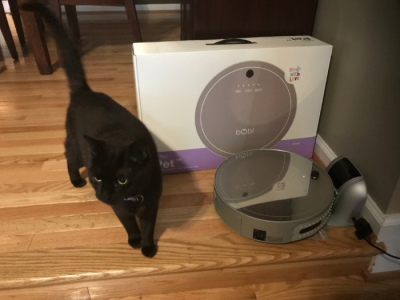 bObi does an amazing job at sweeping, but certainly isn't perfect. But the dumb things she does only make her more adorable and endearing, somehow. She gets stuck under a kitchen stool and merrily carries it around with her until someone has enough of hearing the legs screeeeeeeeeeching across the tile floor. She routinely pushes the pets' water dishes into different rooms and corners. She broke my favorite IKEA lamp. ("Bad bObI! Bad robot!" Ike shrieked at her in the aftermath.)

One time she got tangled in her own cord, unplugged herself and dragged her charging station around for awhile, and then beeped helplessly from the middle of the room because it was time to recharge and HELP HELP WHAT DO I DO? 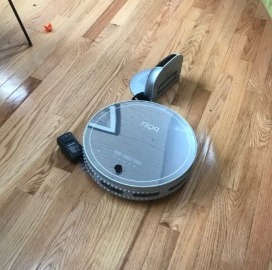 Basically, if she existed in the WALL-E universe, she'd be the first robot to die off and get cannibalized for parts. And for that reason I am compelled to protect her at all costs. 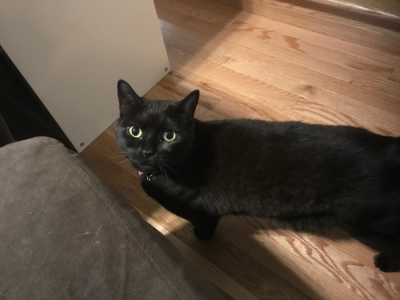 (Similar to how I feel about this stupid baby, who is not-so-secretly my favorite. She spent last night trapped inside my underwear drawer.)

In addition to the aforementioned dish towels, I also bought a new potholder and hid it in a corner to see how long it took anyone to notice. 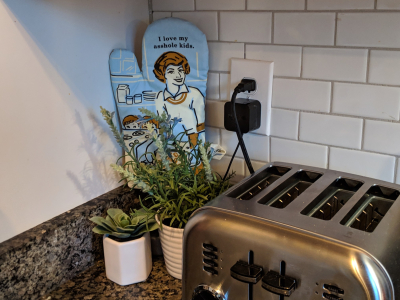 (Answer: Not too long, but luckily they get my sense of humor. "I love you too, Mom," Noah said with an eyeroll while packing the toaster full of waffles.)

Thank you.
Sending wishes for your continued joy .....

This is freakin' hilarious. I was hoping you'd sell me on a bObi because I desperately want to outsource that shit, and while I am not exactly convinced, I had a good laugh and that is worth EVERYTHING. Mostly though, it is so great to hear about your energy and goal-having and feeling of the things! Long may it continue!

I put googley eyes on mine. A+, would recommend.

I’m glad you’re doing well and you deserve to outsource that shit. We have a Great Pyrenees and joke that a robot vacuum would vacuum its way outside and head for better working conditions.

Am so glad you're doing so well! Out of curiosity, why did you decide to go off your antidepressants? Obviously it was the right decision for you, and it's certainly nobody's business, but since you've been so open about everything else I thought I'd ask. Again, so happy things are better for you!

Glad to hear you are doing well. Love the potholder!

Second the suggestion for googly eyes on bObi! I put them on my Roomba and it’s awesome.

I feel you on the side effect weight. I took a beta blocker for awhile for my migraines and I gained 30 pounds in 6 months. That was 3-4 years ago and I’m still not back to my pre-beta blocker weight. Ugh. I’m glad you’re doing well though!

And I have six stupid babies who all seem to do stupid things constantly. But I love all their furry faces so much!

This is a really good idea. I'm driving myself into exhaustion trying to keep up with work, house, kids, scouts, bills, etc. Something's gotta give, and if that means getting a robot to do the dang sweeping, so be it! I'm off to Amazon that shit.

Yay to you and yay to outsourcing. Does the robot survive all the pet hair? I have 2 dogs and one very fluffy kitty. I've been scared to bite the bullet on the robot in fear it will just get completely clogged up. And then start on fire. But holy man I am tired of the constant upkeep.

My home is in the middle of being unfunked. Courtesy of buspar.

I would love a robot vacuum sucker but i have an aging dog who is starting to have accidents. No amount of googly eyes would render that amusing.
Wah. Jealous. <3

(Also small voice) i'm so happy for you:)

Thank you for sharing the good times and the bad --- I'm so glad to hear you are doing better. You are quite adored!

Glad you're feeling better! Have you seen this cautionary roomba tale? Sounds like you are not running yours during the middle of the night, so you should be all good!

This is the best post in so many ways. A few minutes ago I didn't know what a bobi was and now I want to add one to our family. And I'm so glad to hear you're doing so much better!

My brother now has my robot vacuum. We have 3 cats and 2 dogs and the poor thing just could not keep up! (The fact that my house is too hairy for a robot vacuum probably says something bad about my life. . . )

Anyway, glad you are feeling better. I feel you on the weight gain, but I decided I'd rather be a bit more padded and not miserable.

LOVE the potholder. My daughter would laugh if I bought that. (Hooray for kids that get a twisted sense of humor!)

i also recently bought a robot vacuum! Ours is named Rosie (a la The Jetsons) and I adore her. I basically couldn't take the dog hair anymore so I made an executive decision to make a mostly frivolous purchase and I regret nothing. It's amazing how much cleaner things are when everything gets vacuumed every. single. morning.

yay, for feeling better and getting to the other side! I've thought about coming off my antidepressants but the reality is that the side effects aren't bad so best not tempt fate on that one.

This post made me super happy! Wishing you continued sunshine and health!

My dumber cat is super endearing too, even though she remains very confused about “how to cat” 11 years in.

I've so wanted a robot vaccum, but my dogs constantly have toys strewn all over the living room and sometimes dining room. How does that work? Does the robot just vacuum up the toy or does it sense it and go around? Why can I never spell vacuum right on the first try?

40 more pounds is so worth you being here and happy. Soooooo glad to hear you're doing well!

So glad you're feeling better, Amy!

So happy to hear you are doing so well!

Our robot vacuum is my favorite pet! I set the vacuum to go when I’m here (mostly when i’m cooking) due to the roomba + dog poop fear. I feel so productive with the multi tasking! It periodically gets stuck on our transitions- and then yells that it’s “stuck on a cliff”- which it now does in Spanish because I did something on the app- but I find it endearing. With 4 cats and a Great Pyrenees mix ( fist bump Jenn, I feel your dog hair pain) this thing is worth it’s weight in GOLD.

We just glued googley eyes on it thanks to these comments. 10/10- highly recommend.

Was the cat okay from being trapped all night in a drawer??

I’m so glad you’re feeling better! Just remember, there’s no such thing as losing weight. (I think the number is something like 97% of people won’t keep weight off more than two years.) Better to just embrace it and yourself and how beautiful you are right. This. Minute. We love you just as you are!

@Amy in STL So if it’s something a normal vacuum can snag on? Like a toy with strings or fake fur? Yes, the robot will suck it up and drag it around and potentially get stuck. Rubber toys like Kongs or balls it’ll either sense and move around or just push it for awhile while it continues to clean.

We do a super quick floor decluttering (including cords!) before we let her loose now and couldn’t be happier.

@RzDrms Yes! She loves it in there. (Ew.) Her brother started meowing at the drawer around. I discovered her and let her out. It’s a cheap IKEA dresser so not exactly airtight.

I'm curious if you're drinking alcohol has changed since your suicide attempt. We all know alcohol is a depressant, and I know that even though I know that, I still love my beer or wine almost every day, even with my own struggles. It would be an interesting topic for me to read. I know if I stopped completely drinking, it would probably be better. I'm not drinking a lot but ....

You've been pretty brave about sharing quite a bit. Just curious about your experience there as it's often not discussed.

Oh ... lovely, wonderful, clever, Amy! I haven't read your blog for a while, but I used to visit almost every day. (Ike is SEVEN? How did that happen? I remember when you were expecting him.) Now I find myself searching the archives and crying and wishing I could hug you. Stay strong, beautiful woman! Depression and anxiety are double demons and they lie, Lie, LIE. You are amazing and I'm so grateful you're still with us. Much love!!

Also ... I desperately want a robot vacuum and the breakdown is about
40% to clean up after my little piggies
60% to see if Millie-kitty will ride it into battle