Home Archives About Subscribe Advice Smackdown Tip Jar
The Branch of Watches Past
Things That Do Not Work, Part One

Jason's been on a business trip all week so I've been trying my best to hold things together on my own. Nobody tell him I've been soaking the dinner pots since Monday.

Poppy jumped over the fence to chase a squirrel, Beau escaped out an open garage door, and Jake found and consumed an entire package of English muffins. Packaging included, save for a single twist tie. Oh, and Rey got her head stuck in a package of seaweed snack while Finn followed after her trying to clean her butt. . It's like, when getting all these dogs, I looked back on the semi-impossible toddler days of yore and was like, yes. Let's absolutely do that all over again.

On the other hand, the human children are no longer toddlers or semi-impossible. 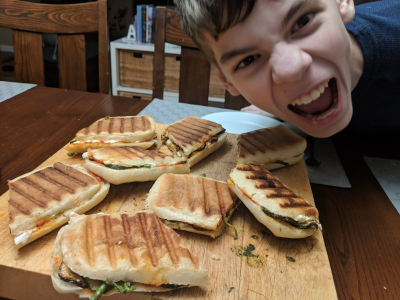 Noah was so excited to see sandwiches for dinner he didn't even care that they were technically full of vegetables. Then last night Ike ate two full servings of chicken and was the first one to finish, so he ordered me to text J and report on this truly STUNNING development. 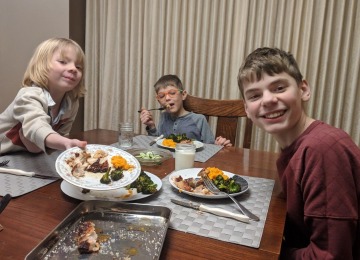 (The night of the vegetable sandwiches J received a photo of Ike sitting alone at the table an hour and a half after dinner started, casually eating one microscopic bite every 20 minutes. So I think his "don't ever forget how great I was" statement had the unspoken conclusion of "BECAUSE IT'LL NEVER HAPPEN AGAIN.")

But no, they've all been mostly delightful and helpful all week. And Ike is the one who spotted Beau running loose and corralled him back home using the tried-and-true method of chasing him down the street while waving his arms and screaming BEAU GO HOME GO HOME at the top of his lungs, meanwhile his neighborhood playmates ran around in panicked circles because this seems like a GROWN-UP PROBLEM.

(I heard the commotion and ran outside to be the grown-up solution to the grown-up problem, albeit in bare feet, a tank top and no bra. Shockingly, my appearance did not stop the screaming.) 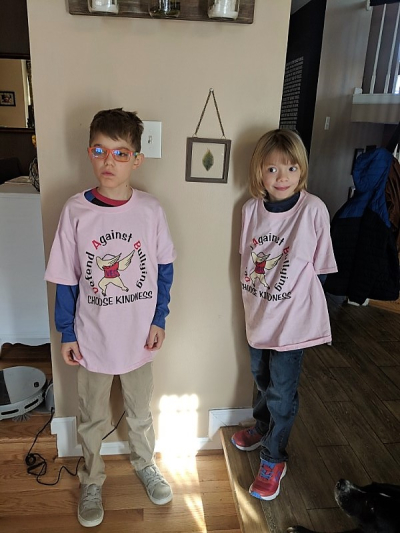 Clowning around for Pink Shirt Day. 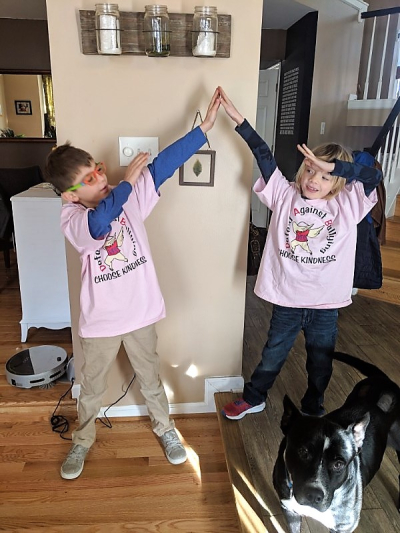 Also pictured: Newly heartworm-free Grampy Jake, who has no idea we're cutting his balls off tomorrow, and our beloved Bobi the Chore Robot, who is basically the glue holding this household together at this point.

I want to come be a fly on your wall for just one day!

We can ours Brian the butler. There have been many conversations about Brian not doing his job or Brian being stuck somewhere or Brian eating someone's shoelaces. It amuses me earlier.

Isn't it great when being the only parent at home goes from ugh to awesome? It is like a switch, and all of a sudden the kids are pretty cool when Dad is gone. The thing is, don't tell Dad because he does nice things when he has the slightest bit of guilt for being gone.

Amy,
I love your stories. I've been a loyal reader since 2004 and have truly enjoyed watching your boys grow up and getting a small glimpse of your world. Thank you for continuing to write. - Lisa

My 5 year old ate spicy chickpea curry last night. I was impressed. The goat cheese polenta was declared to taste weird, though. The 1.5 year old at least tried a small bite while the 3 year old refused to touch any of the food.