This week we had to say farewell to Ezra's Magic Glasses. 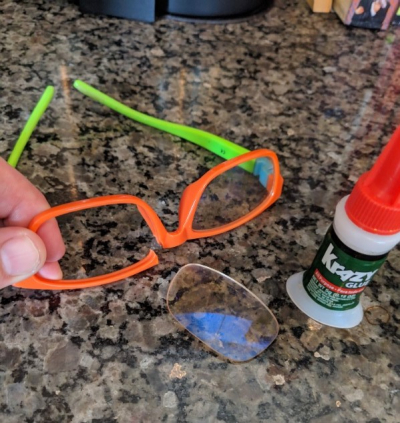 They lasted just over a year, which is a pretty good run for plastic glasses he insisted on wearing every single day, all day, from the moment he wakes up until he turns off the light to sleep. (This insistence was fueled by both a genuine need to avoid the dreaded migraines and the fact that he got constant compliments on his "super cool glasses" everywhere he went and so he adopted them as his Signature Lewk.)

We tried in vain to glue them so he wouldn't have to face the computer lab without them while we waited for a replacement pair, but the frame kept breaking and the lens falling out. I gently suggested that maybe -- MAYBE -- he could give it some time and see how he did without the glasses, because well...you know. My children sometimes occasionally perhaps fall on the high side of the OVERLY DRAMATIC scale, and I do sometimes suspect his self-professed sensitivity to every single light bulb in existence is not 100% rooted in reality. Maybe 50/50 real need vs. middle child desire to stand out, plus the aforementioned compliments/attention.

(They're just blue-light blocking glasses, intended for use with computer screens. There's no magnification or anything, and no harm in him wearing them all the time, as long as he doesn't mind looking at the world with a slightly yellowish tint.)

The jury is still out on that one, by the way. He came home from school visibly pale and complaining of a headache...but then spent several happy hours on the Nintendo with absolutely zero issues. But we'd already ordered him a new, more grown-up looking pair of specs. 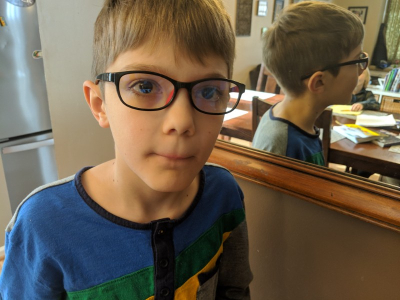 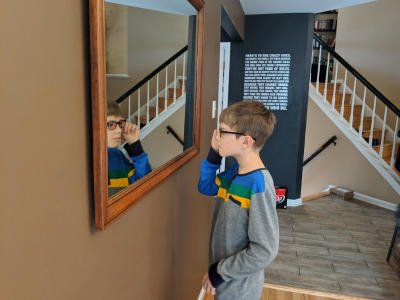 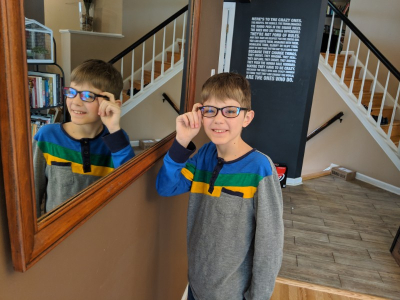 He's clearly much happier with them than without them, so that's enough for me.

Over a year? WTF and say waaa?
If the boy is happy...if your boys are happy...if Amy is happy...may I please say...your Jason is happy.
And this makes me happy.

It may be that the school computer monitors are set differently, in terms of brightness/white-balance/flicker from whatever screen is used for Nintendo-playing? Plus the School Institutional Lighting may get in some kicks as well. Or it could be that the effort of school plus the drain of the lighting-stimulation is too much, but take away the school-effort and other sources of stimulation and eh, the light would be fine.

(I do poorly with anything that flickers; I used to have to swap the refresh rate on CRT monitors to not get headaches; but the effect is cumulative, so if I'm reading something on a barely-within-tolerable-levels monitor and *also* there is an overhead fluorescent light that's flickering mostly-imperceptibly, then I'll get a headache. But only one or the other and I may escape, unless I'm particularly tired, in which case, toast. This isn't blue light (or at least, is primarily not blue light), but it's the same sort of concept of brain/eyes tired, I think?)

He looks so grown up! Now make it stahp!

Thats the thing with migraines, even being convinced not wearing the glasses will cause a migraine can be enough to actually trigger the migraine.

I shall miss those glasses! That, and I don't want Zah to grow up... Or Noah, or Ike.

Dear Ezra (Mom, please let Ezra read this or read it to him, kthx): Those new glasses of yours are SUPER cool! I mean, I really liked your old, colorful ones, but the black ones look a little more grown up and fancy, and they’re brand new! I think you should wear them as much as you feel comfortable! I hope everyone likes them as much as (or more than!) your old colorful ones. Yay! Sincerely, your mom’s internet friend who reads her blog.

Oh, Zah! So grownup and handsome! Stop it!