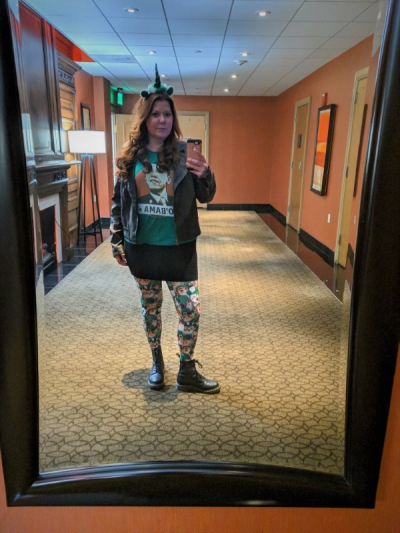 Doc Martens Because I was Seeing The Pixies (also Weezer but was mostly there for The Pixies): $140 but the blisters are freeeeeeeee

Actually enjoying a concert for the first time in God knows how long vs. of spending the entire time on the edge of a panic attack because there could be a fire or roof collapse or crowd crush so maybe I should obsessively check the exits again and map out an escape route OMG we're all probably going to die and I cannot believe people do this for fun: PRICELESS

(Also priceless: Me, in general, for using a commercial format MasterCard hasn't even used in at least a decade, thus dating myself even more than the Docs and Pixies tickets EVER COULD.)

You, being here. PRICELESS!

Mwahahaha. I could NOT figure out how your hair got so long. Hadn’t considered extensions. How fun!

I LOVE those cat leggings! Your entire concert LEWK is fantastic. :)

Hahaha! I totally got the Mastercard thing, so I'm old, too! So glad you had fun, and you look hella cute!

You are so incredibly adorable <3

I’m disappointed on your behalf that the Doc Martens gave you blisters. Every once in a while, I think about getting a pair but I am old and need good shoes that won’t kill my feet (past me died a little bit typing that).

I am beyond happy you were able to go and enjoy yourself...and ridiculously jealous that you went to see the Pixies! I ❤️ Them! Rock it girl!

You are magical. And I totally got the reference. And! I'm going to the Weezer/Pixies show when they get to CA next month!! Woohoo!

You are a treasure! An ancient (same age as me, sigh), priceless, treasure. Love/hate the Docs with ya.

Hotel Monaco? We get lunch at the B&O in the lobby all the time!