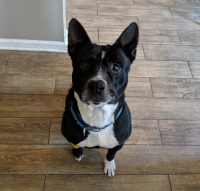 It's been awhile, but yeah, this poor, sweet old dude is still here with us. And unfortunately he isn't doing so hot at the moment. In more NEUTER UR GOTDAM DAWGS news, Jake's neuter surgery did not go particularly well or easy for him. After a couple cancelled appointments due to snow and other disasters, I finally dropped him off last week, then came home and happily wrote up a sunny adoption listing for him and went through our photos in search of the best/cutest/biggest-softie-eyed ones. This was the last thing! The last hurdle! A simple snip-snip and then he could move out of medical-case fosterdog limbo and into the forever-home adoption pool! I drove back to the vet that afternoon and he was rushed back into surgery about five minutes after I got there, because there was still a "bleeder" hanging around...down there...somewhere. The next day he came home, but without the Cone of Shame, and so he promptly licked his way to a couple busted stitches and an infection and ONCE AGAIN, dog dickblood (or...ballblood? general-genital-area-blood?) became a thing that happened. Happens. Is still happening. This morning I got the chance to impart to Ike a super-important life... Read more → 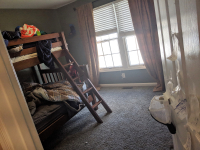 OH RIGHT ROOM PHOTOS. PREPARE TO LOOK THE HELL OUT OF SOME FURNITURE AND SHIT. Ezra and Ike's room, before: (Minus a generous floor-coating of toys and clothes and there was an IKEA dresser on the verge of complete structural collapse just behind the door. It has since been burned in the fire pit.) Ezra's OWN ROOM, which is HIS and NOBODY ELSE'S, now: Those curtains were in the family room when we moved in. After I replaced them Ezra claimed them for his own room because they were "fancy." They are also gold damask and the kid literally chose a paint color called "Damask Gold," so I can probably stop writing about him now, because that tells you everything you need to know about who Ezra is as a person. I upgraded to a standing desk in my office (that I am currently...sitting at, because I am tired) and gave Ezra my old one. Ezra chose EVERYTHING else -- from the furniture to the bedding, which he (correctly) predicted would coordinate perfectly with the wall color. "This is all very me," he declared. He also decided he was ready to be a plant father to some bamboo. We're still... Read more →

Today is our last day of spring break, and in lieu of typing words (which are just terribly passe now, as I learned this past week after watching several dozen of my 11-year-old niece's Tik Tok...videos? posts? tikkity toks?), here are a selection of photos, mostly of Ike, because he is now mostly the only child who still welcomes his parents' not-hips-to-the-Tik-Toks-of-today cameras: There weren't any beginner trails still open at Killington, so Jason agreed to take Ike down the mountain using a "special ski harness." I believe this photo captures the exact moment Ike realized the "special ski harness" was actually a "leash." The Storch men and Storch cousins, post-leash run. It's funny because the hat contains a dirty joke, and also because Ike kept walking around saying LOOK AT MY HAT I'M JASON. (I do not believe Jason has ever dabbed in his life, so the impression could use some work.) On the drive home from Vermont, we stopped at the Saratoga National Park to check out the battlefield, which was entirely too much "field" and not enough "battle" for their taste. (We also drove by General Philip Schuyler's house so everybody could sing-yell "THE SCHUYLER SISTERS" at... Read more → 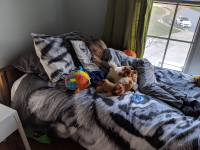 aaaaaaaaaaaeeeeeeeeiiiiiiiiiiiiiiiiiiiiiiiii It's spring break, bitches. Although pretty light on the "break" part for me, personally. We're heading up to Killington, VT for a few days for our semi-annual "let's cram eight humans into a two-bedroom condo" visit with Jason's brother and family, where there is still SNOW and ICE and BULLSHIT. The seven other humans will probably ski and snowboard while this chicken human will stay inside and likely end up working most of the time. Work has kind of exploded all over the place for me, in the usual freelancing feast/famine cycle where I go from frantically emailing every work contact I know to remind them that I exist to suddenly juggling 25 deadlines at once. And of course the timing lined up perfectly with us deciding to go nuclear on the boys' bedrooms, so for the past week I've been either 1) working on Very Exciting & Important Technical Documents, 2) up to my eyeballs in IKEA furniture and Lego storage, or 3) just sort of lying on the floor and staring at the ceiling for a sec. I'm happy to report that the bedroom makeovers are about 99% complete, and everyone is very, very happy with the... Read more → 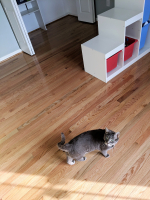 (Thank you everyone for all your kind words and thoughts. Last week suckkkkkked but I am okay.) Once upon a time, when we ripped up all the carpet in Yellow House and had wood floors put in, we decided to cut a couple corners and save ourselves a couple dollars. The corners we cut were the boys' bedrooms, which all had somewhat newish-looking carpet. We figured we'd leave those rooms as-is and wait for the carpets to get destroyed over time and replace them only when we absolutely needed to. (Much like our approach to the kitchen appliances, and if you're keeping track I am STILL cooking and baking with an oven I hate with the fire of a million faulty oven coils, because the fucker fucking sucks but just won't DIE ALREADY.) (On the other hand, this happened, so it's like I got a brand-new dishwasher all over again.) ANYWAY. FLOORS. CARPETS. TRY TO STAY ON TOPIC FOR ONE BLEEDING SECOND. We regretted our decision almost immediately, because the boys' rooms became Animal Accident Central. Why pee outside in the snow or rain or your litter box when you can pee on some soft, inviting carpet? Especially if that... Read more →