PREPARE TO LOOK THE HELL OUT OF SOME FURNITURE AND SHIT.

Ezra and Ike's room, before:

(Minus a generous floor-coating of toys and clothes and there was an IKEA dresser on the verge of complete structural collapse just behind the door. It has since been burned in the fire pit.)

Ezra's OWN ROOM, which is HIS and NOBODY ELSE'S, now: 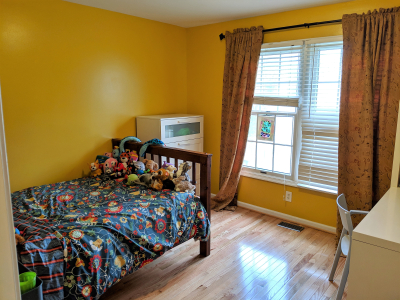 Those curtains were in the family room when we moved in. After I replaced them Ezra claimed them for his own room because they were "fancy." They are also gold damask and the kid literally chose a paint color called "Damask Gold," so I can probably stop writing about him now, because that tells you everything you need to know about who Ezra is as a person. I upgraded to a standing desk in my office (that I am currently...sitting at, because I am tired) and gave Ezra my old one. 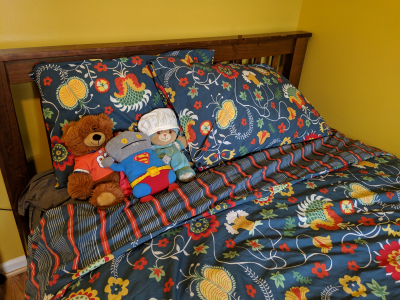 Ezra chose EVERYTHING else -- from the furniture to the bedding, which he (correctly) predicted would coordinate perfectly with the wall color. "This is all very me," he declared. 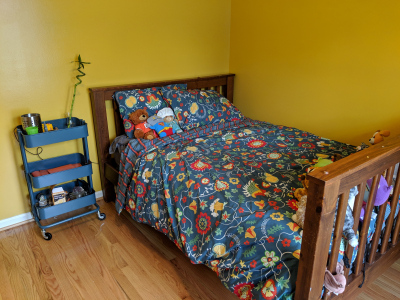 He also decided he was ready to be a plant father to some bamboo. We're still waiting on his artwork selections to arrive. (Some dodgy and definitely not properly licensed Calvin & Hobbes prints and posters are coming from China. Please don't arrest us, Copyright Police!) 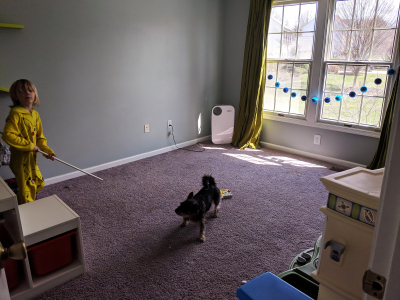 (Again pictured AFTER I made them clean up all the Legos. Before they did that you could only really see the vague SUGGESTION of the carpet.)

And now, it's Ike's Cozy Corner and a much-edited half-playroom: 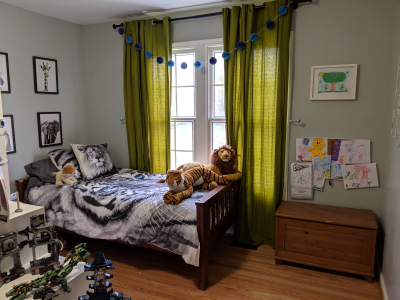 Ike chose the zoo theme and bedding himself, probably because he really just wanted the lion and tiger stuffed animals and (correctly) deduced that we would buy them if they were part of the aesthetic. 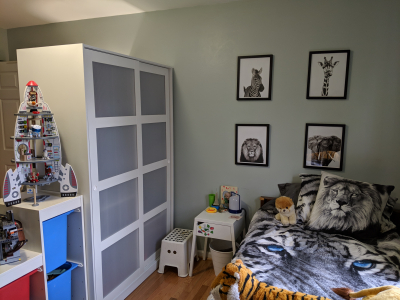 (GUESS WHAT: There's a hamper hidden inside that wardrobe. AND IT WORKS. It actually works. He uses it and brought it downstairs when it was full and making the wardrobe messy. I could honestly cry a little.)

And then the view of the other side: 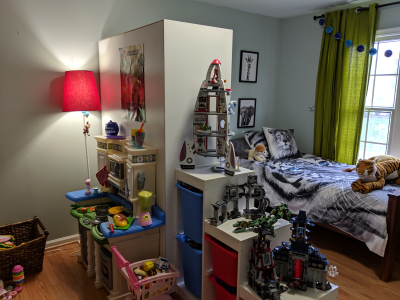 The closet is basically full of Legos. I was super proud of myself for fitting all the Legos in there until this morning, when I found another bin of Legos. 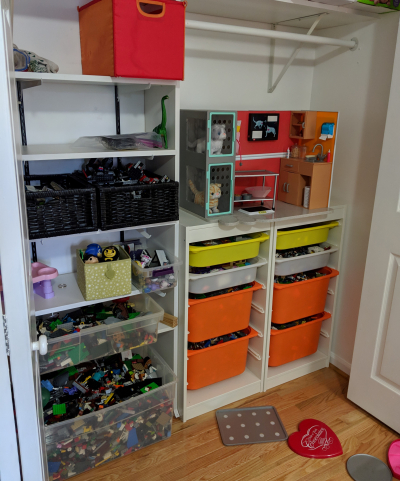 Noah is now super jealous of Ike's space and wants a room makeover after all. I told him we'd consider it, but he'd have to go shopping at IKEA with us like his brothers did. "Oh God," he replied, looking stricken. "But that place is terrible."

Noah's reaction to IKEA made me laugh so hard I snorted sparkling water up my nose!

WOW. Fantastic job, all of you! Ezra's aesthetic is SUPER PRETTY!

So awesome! And the suggestion for dividing Ike's room was brilliant. I adore Ezra's fashion sense! It all looks great.

I second that reaction to Noah's reaction! Double snort!

Noah is SO RIGHT about Ikea. I believe it is Dante's tenth circle of hell.

I feel ya Noah.

Probably you should give your requirements to Ezra who will do a killer creative brief for you and lead the parents on a whirlwind tour of Ikea picking out the Good Stuff.

Ike really gets the best of both worlds, IMO. A little corner to himself but the reminders of his brothers right around the corner so he is never lonely.

I kinda feel the same as Noah about IKEA. I don't want or need home furnishings. I Love all of the crap at the end. THAT I could look at for days!
Love Mighty Zah's room. And Not A Baby Anymore Ike's dual purpose room. I wpuld be jealous too!

This is all very me," he declared.

This is such a sublime and delicious line. 💕

i can't wait for Ezra to start blogging

Can you tell me where you got the blender and rocket that are in Ike's room? Thanks so much!!

BEAUTIFUL!! We moved in 2+ years ago and every single wall in our entire house is still beige. Sigh. I'm sure I'll get to it? Someday?

Those look great! Every time you post about Ikea, I think of your post many moons ago about Ikea. https://www.amalah.com/amalah/2005/08/ikea_jones_and_.html

Just an FYI- you shouldn’t burn mdf (which most ikea furniture is made of) in a home fire pit. It’s loaded with chemicals, formaldehyde and adhesives that are toxic. Most experts recommend you send it to the landfill as it’s too dangerous to burn..

Here’s an odd comment - I have that same bedding set, and when we bought it, we bought 2 square orange shams... that perfectly match the duvet and what not, and then never used them - put them on the square pillows and then decided “meh” maybe not. It was one too many orange things. Would Ezra like them? I’m happy to launder and send them - they also are a fun velvetesque texture... and they might be something that’s also very him...

Since I no longer live 10 mins away from my beloved IKEA, I do browse online before I go, because now it's a big trip and I have to buy all the things. Sometimes, if I know what I want and I'm not too worried about seeing it in person I even just order stuff when they have free shipping.