(Thank you everyone for all your kind words and thoughts. Last week suckkkkkked but I am okay.)

Once upon a time, when we ripped up all the carpet in Yellow House and had wood floors put in, we decided to cut a couple corners and save ourselves a couple dollars. The corners we cut were the boys' bedrooms, which all had somewhat newish-looking carpet. We figured we'd leave those rooms as-is and wait for the carpets to get destroyed over time and replace them only when we absolutely needed to.

(Much like our approach to the kitchen appliances, and if you're keeping track I am STILL cooking and baking with an oven I hate with the fire of a million faulty oven coils, because the fucker fucking sucks but just won't DIE ALREADY.)

(On the other hand, this happened, so it's like I got a brand-new dishwasher all over again.)

ANYWAY. FLOORS. CARPETS. TRY TO STAY ON TOPIC FOR ONE BLEEDING SECOND.

We regretted our decision almost immediately, because the boys' rooms became Animal Accident Central. Why pee outside in the snow or rain or your litter box when you can pee on some soft, inviting carpet? Especially if that carpet is in a room where the grown-up humans won't even know that you did it if you're sneaky enough?

(And the small humans can and will ignore EVERYTHING, up to and including a giant-ass turd in the middle of their room.)

(Me, upon seeing the giant-ass turd first thing in the morning: Has that been there all night? Why didn't you clean it up??

Them, casually walking around it: There wasn't any toilet paper to pick it up with.

Me, upon also noticing the contents of the unflushed toilet: THEN WHAT DID YOU WIPE WITH???)

The carpets STUNK. So bad. So gross. We deep-cleaned everything and instituted a closed-door rule but you know That Smell doesn't die and will eventually come back, like a zombie, over and over again. Especially in the winter with the windows closed up; it seriously became unbearable.

So as of this week, I am happy to report that my children are no longer sleeping in rooms that smell like the monkey house at the zoo. You're welcome, kids! I know. We spoil them. WHAT HAV U DUNNNNN?!

Before the install, we had the boys pack up the contents of their rooms and playroom into a assortment of bins, baskets and boxes and turn the upstairs hallway into a bona fide fire trap. 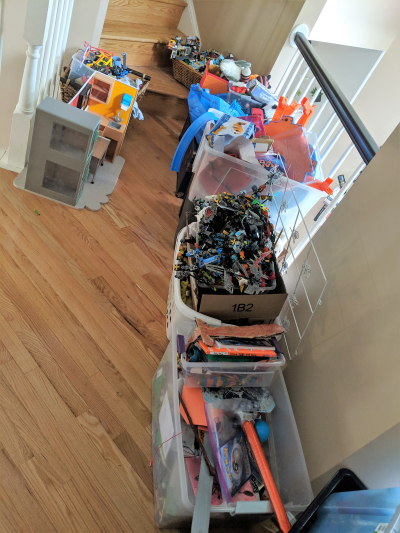 What IS all that crap? Where did it all even come from? And how much of it will never, EVER go back inside their rooms but will mysteriously disappear forever instead?

So now the REAL fun can begin, which is ROOM MAKEOVER TIME. Ezra's room is getting a fresh coat of paint, a new dresser, desk, bedding, and shelves. Ike is getting an eviction notice. He'll be moving to the big room, which we will be dividing in half (thanks to all the commenters who suggested that brilliant idea which had simply never occurred to me). He'll get a new wardrobe, shelves and bedding to create a nice cozy spot of his own while the rest of the room can store a VERY LIMITED CURATED PARED-DOWN selection of toys.

(Noah will be getting...nothing at all, because he doesn't want anything, and even turned down the AWESOME suggestion of making his room actually look like quarters from the Titanic, like with portholes and nautical shit. Not much for change, that one.)

Anyway, the house is in complete shambles right now, but there's a plan! I foresee much organizing and decorating and meatballs in our future. 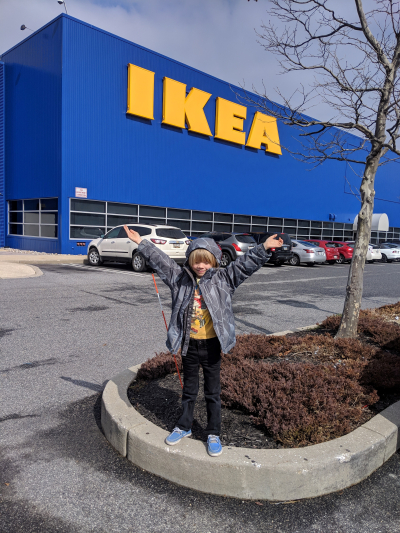 I wish we had an Ikea near us. The closest one is in Salt Lake City, 350 miles away. *sigh*

Gahhhhh I love this. I would like to politely demand many updates on this subject. My boys are 3 and 7 and we just mixed their rooms around recently, and it will happen again before I know it. Also I'm an IKEA junkie, unashamedly.

I want to rip out the carpet in our 3 bedrooms. One is an actual bedroom, one is my CR(ap) AFT room and the other is hubbies mancave. Cat puke and pee and other spills that never ever truly come out are just nasty. I want to put in ceramic that looks like wood planks. Hubby is fighting me tooth and nail. I will win! It will just take time!

I envy your motivation. I need to rip up carpet in the master bedroom and the living room, but the thought of the upheaval makes me want to run screaming into the wilderness where I’ll never be found. Rock on, Amy! You’re kicking asses that I can’t even comprehend. :)

Ah, The room Shuffle. We are so there. I've got a 5 year old and two year old. I did the same thing. Parents in the biggest room, youngest in the smallest room, which has window connecting to the master bedroom(it's a rental, don't ask), so no need for baby monitor. Older kid can play legos in decent sized room with door closed and baby can't eat them. Great. Fast forward 1.5 years and now the 5 year old keeps getting into my bed in the middle of the night and the almost two year starts waking at 5am and yelling at us through the window. I'm pretty sure if we ignored her she'd go back to sleep, but she wake up the 5 year old and he's up. And then everyone is up......and wants milk and food and it's 5am!!!! :( . I think it's time to move the youngest as far away as possible until she learns 5am is not an acceptable wakeup time... I'm thinking another island or maybe just the other room without adjoining window.

Bed tent!! I just re-read the old post and I bet a bed tent would keep Ike a little contained.

seconded! Many many updates! Who doesn't love a makeover?!

We have roomswapped so much in our house that all four of us have spent significant time sleeping in each of the three bedrooms. Both my husband and I have sleep apnea, and I have insomnia, so we do better in our own rooms. So I had the master bile he had the “guest” and my babies shared the nursery until we decided to put them in the master (because it was the biggest) and my husband and I swapped rooms. It is kind of cool thought - this is completely and utterly my house, I know all the rooms well.

I was seriously LOL over your post. I know of what you write, friend. My sweet daughter has the smelly carpet. The smell is unbearable in all seasons, IMO. But I can’t seem to make the phone call to get the damn carpet ripped up and replaced with wood.
Please keep us updated on the remodels!! I need inspiration. Our basement “playroom” looks exactly like your stairwell photo....which induced maniacal laughter. I need help.