I recently had to pass a drug screen and background check for work -- for a contract job I've had for over two years now and successfully not done while coked out of my mind and/or while committing various felonies, not even once, but I guess you can never be too careful with us shifty freelance types. I did not fail the drug screen, though I did initially fail the TAKING of the drug screen. Because I didn't pee enough. The ONE thing I needed to do that entire day was to pee in a cup and I couldn't pee enough in the cup.

(This is what happens when you successfully medicate my anxiety, people. One time I showed up for a 20-week ultrasound with a bladder so full I burst into hysterical tears while signing in at the front desk and then spent a terrible 10 minutes in the restroom trying to pee just some of it out, but not all of it, because then we wouldn't be able to see the babyyyyyyy and find out the sex and everything in the entire universe would be ruined. RUINED I SAY.)

I was directed to a water cooler in the waiting area and told to sit and wait an hour or so before trying again. I asked if I could like, leave and come back another time and you'd think I'd asked if I could go meet my heroin-and-clean-pee guy real quick. No, I was not allowed to leave, I was to sit there with my paper cone cup of shame-water and think about HOW HARD WOULD IT HAVE BEEN TO JUST SHOW UP A LITTLE MORE HYDRATED? STOP WASTING PEOPLE'S TIME WITH YOUR THIRSTY ASS.

I am pleased to report that my second attempt went much better, and also that I passed, and also also spent the rest of the day peeing like a racehorse every 20 minutes or so because I chugged SO MUCH damn water while in that damn waiting room.

The background check was also an exercise in Everything Involving Amy Gets Super Complicated For Some Reason, since they asked for seven years' work of tax information to prove that yes, I am indeed gainfully self-employed and never bankrupted a casino or three. Do you know where seven years' worth of your tax information is? Because I am not The New York Times, I did not. I managed to track down everything back to 2013, and then weirdly found everything prior to 2008, but I could not find 2012.

So I said hi, I'm really sorry, but I can't find my 1099s from 2012. I can show you some even older ones, or extra 1099s from some more recent short-term work, or my LLC paperwork, and also, can I point out that I passed this very same background check TWO YEARS AGO, so maybe look that one up and see that 2012 was just another pretty boring year in my life? I did some work, paid some taxes, probably talked about bodily functions on the Internet?

They said sorry, if I couldn't provide 1099s, I'd need to provide this other form of documentation, with this "other form" being the name of something I'd never even heard of and most DEFINITELY didn't have lying around in a box somewhere (FROM SEVEN YEARS AGO). I even forwarded the request to Jason and HE had no idea what they were talking about. I bet they were just making shit up to see if I'd crack and admit to spending 2012 on the lam for all the crimes I committed eight years ago.

Luckily, Jason remembered that one of my holy crap I feel somewhat human again projects involved cleaning out my office, and that while I'd already searched every drawer, bin and box currently IN the office...I probably forgot to look the bin I'd temporarily* stashed in the basement bathroom. The bathroom directly next to my office, the one I use multiple times a day (BECAUSE I'M SO PROPERLY HYDRATED), and yet never thought to look through.

Lo and behold, all the missing years of taxes and 1099s were there, and I was able to defend my employment honor and successfully clear the background check. I started work (again) this week, and am basically set for life, and/or for two years when company contractor rules dictate that I do all of this, all over again.

*Temporarily as in a couple months ago. It's still there, actually. But look at how it blends in with the floor! 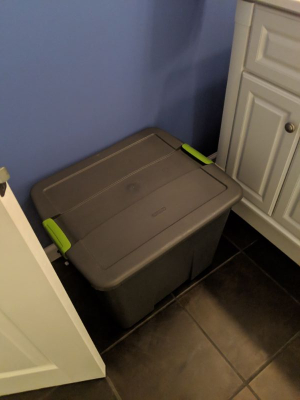 I can hardly see the bin! You missed your calling as an interior designer.

That bin totally matches the floor. I think that means it's supposed to stay there. Win/win!

Sorry, but the only thing I could think of while reading this post was...

The President* of the United States refuses to release his tax returns...and HE GETS AWAY WITH IT!

No other person in our country could tell an employer to "F--k off" when asked to provide tax returns and then have the employer respond with, "Thank you, Sir. May I have another?"

You should have tried this tactic. ;-)

My taxes are on my computer and on my external drive and probably on a thumb drive or two in my office somewhere...you know just in case I RUN FOR PRESIDENT and they need my tax forms...

I had (almost) that same experience with the ultrasound. They should really tell people just not to pee right before, instead of telling them to show up with a full bladder. Sheesh.

I do contract/consulting work too, and have multiple drug tests every year as I start with most (but not all!) clients. I have had your experience and also had a lab person once tell me I didn't look like my ID. But, it was my ID, so what could I do about it? My other favorite that I run into every so often is needing proof of my high school diploma, despite having easy proof of my frickin master's degree. But if they can't reach my high school office (in the summer, let's say) whoa, hold on, maybe we DON'T want you to do that three months of work for us that is exactly like the samples in your portfolio and despite working with you successfully a few years ago.

I went in with a very full bladder for an IVF transfer. After checking that the embryo made it out of the syringe, they told me to pee. They then came running down the hall after me, as after double checking, the embryo was still hanging out in the syringe. I get back in the stirrups, we do the whole thing again, and they let me pee. We're in the consult area waiting to talk to the doctor, when the embryologist walks in with two large bottles of water and says we have to try again. Luckily they also give you Valium for IVF transfers, so I was laughing the whole time rather than crying.

For all the trying, the embryo didn't take.

(and the commenter above who has had to provide proof of *high school graduation*??? What is going on with that? I can imagine a situation in which a job would require, say, a BA in English but would not accept a Master's in something sciencey, or who would accept a BS in a specifically relevant math/science sort of field, but not a Masters in a performing art or something like that, but I cannot imagine a circumstance where your *high school* diploma would matter more than your undergrad diploma. I mean, I guess unless you went to a specific high school and your diploma date proves that you *did* in fact cross over with [celebrity] and are therefore in a better position to encourage [celebrity] to sign on to an advertising team or something, but that seems phenomenally unlikely on a number of levels. And more easily proved via yearbook. )

Aw, yay for Jason. I think you should keep him.

The entire time I was reading this I had the "And Agent Orange gets elected to be president of the whole damn country with nary a tax return" refrain ringing through my brain.

Nice work on the background check pass, though I am still a little suspicious about what went down in 2012.

You and I are having the same problem. I couldn't pee for my new employment drug test so I sat by the water cooler while everyone looked weirdly at me. And then when I provided the subsidiary company that I worked for most of my career the new job came back and asked for my W2 since they couldn't locate that company. Luckily I actually had my W2 from 2012 on my laptop but I think they are still suspicious. Glad everything worked out for you!

This blog is a cover and you are really working as a SuperSpy. Hiding in PLAIN SIGHT. Pretending to bumble. I see it, Storch. :)

I know you can’t answer this, but who are these people who can’t bother to give you a W2 and benefits and permanent employment but can pry into your personal finances and make you take drug tests? That is just not right.