If I had to name one aspect of parenting that I deeply, intensely hate, it actually wouldn't be the diapers or the sleep deprivation or the full-body bone-goop temper tantrums or even the look on your preshus beloved baby's face when you accidentally call him "sweetie" while saying goodbye in the middle school hallway.

No, it'd be taking them to the damn dentist.

Our past appointments easily take up several spots in my all-time top 10 Low Moments In Parenting list. We're talking screaming, kicking, crying. (Them, not me. At least not until we were back in the car.) I'd have to sit in the chair with them, pinning down their arms and legs with all the force my own limbs could muster, while a clearly pissed-off and tired-of-this-shit hygienist tried to assure them that "Mister Thirsty" was nothing to be scared of.

(FUCK YOU MISTER THIRSTY, I'd think to myself, while also trying to think of post-appointment good-behavior incentives that didn't involve tooth-rotting junk food, lest the hygienist judge me even more.)

We tried kid-only dentists, special-needs dentists, dentists whose lobbies were packed with video games and had televisions in the exam rooms. My kids would have none of it. You can't make me open my mouth, motherfucker. You are not coming near me with that weird toothbrush and toothpaste that doesn't really taste like chocolate, it tastes like wall spackle mixed with sand and WE ALL KNOW IT.

Eventually, we'd get through the appointment, exhausted and angry...and still unable to get at least one kid successfully x-rayed and another to acquiesce to anything other than a standard-bristle tooth-brushing. Then the receptionist would be like, "See you in six months!" and I'd be all, "KILL ME IN FIVE."

(They were all more or less okay with the dentist when they were toddlers, for the record. It got progressively worse as they grew older and heavier and thrashier.)

And here I admit it: We stopped taking them to the dentist for awhile.

But that is bad! You should not do that! Especially since any mental relief I got from NOT having dentist appointments looming on the horizon was completely offset by all the guilt and worry I felt about my horrible negligence. What if all their teeth were literally rotting out of their heads! What if their gums were full of impacted molars growing upside-down into their jawbones! Dental plan! Lisa needs braces! Dental plan! Lisa needs braces!

Then Ezra started complaining about one of his baby teeth. It was loose but not very loose, and he wouldn't let us touch it because he said it hurt so much. He'd flinch when eating.

And then Ike showed up at the side of my bed one morning (at 5:25 a.m., to be exact), pointing at his mouth and demanding to know why one particular grown-up tooth was taking so long to come in, because he lost the baby version "like, when I was five."

(I don't believe that's the actual timeline, but I admit I don't really know for sure. Teeth fall out by the dozens around here. Who can say anymore?)

So we took them all to the dentist yesterday. A new dentist, lest we return to the scene of past shames and horrors. Jason and I both took the morning off so we could deal with it together. We mapped out a plan for zone defense and multiple freakouts. We gave each other an extra hug in the morning. We were dreading it.

Noah still isn't a fan of Mister Thirsty (and for real, fuck that guy), but the super nice and actually-experienced-with-special-needs hygienist said that was cool, he could just get up and rinse in the sink if he preferred. (WHAT A CONCEPT.) He is apparently an A+ flosser, which puts his probably-a-C-minus mother to shame. Ezra and Ike sat perfectly still and calm throughout their cleanings, exams and x-rays.

Nobody shamed us for the lapse in visits, quite the opposite, in fact. Clearly, a little maturity made all the difference in the world. Plus everybody's teeth are absolutely fine and perfectly healthy (though there are definitely some spacing issues and braces in our future), including Ezra's pesky painful baby tooth. "It just needs to come out, buddy," the dentist told him. 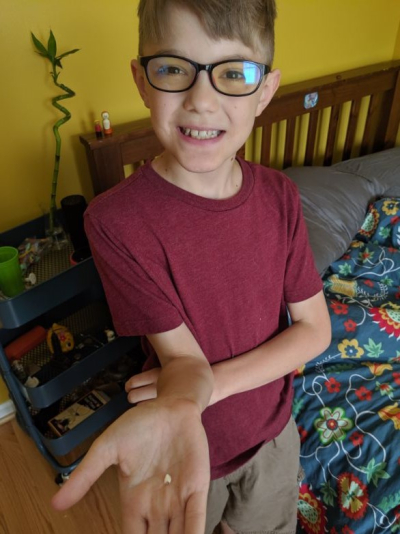 He pulled it out himself this morning. He feels much, much better now.

We go back in six months. And I feel much, much better now too.

I thought dentist horror was a thing of the past because my three always LOVE going to the dentist, which just leaves my top ten worst parenting moments to be things not related to other people, but instead my own temper, my short-temperedness, my shouting even when I shouldn't, etc ... I'm really glad you had a great dental visit yesterday, and that no one needed emergency dental work!!

I have severe dental phobia...your boys give me hope maybe I’ll get better someday too 😀

Getting up and rinsing in the sink??? What a concept! (why, WHY do dentist's offices [and everywhere else with a Standard Operating Procedure that is not actually the only way to get from Point A to Point B] not have these alternatives mapped out for all the people for whom the standard approach doesn't work?)

I found the best dental hygienist for my Rob. How good? She explained everything and knows to wait until he is ready. He sits through an entire cleaning now and does xrays and everything needed. And he is 15 with severe autism. It is such a relief to have her. We woukd still need to sedate him for fillings but I have hope that some day... And hopefully we will even be able to get braces someday.

Oh yay! Nice news! Maybe they just....grew out of it?! Realised that a short visit is worth it to sort out boring problems?! Hooray all round!

I'm glad they all surprised you and got good check ups. One of my three is a not a big fan of the dentist. She doesn't have any special needs but is a bit of a PITA. We go to the dentist next Friday. Hopefully she does better this trip. Apparently she did fine when my father in law took her last time. I sometimes think she saves her best performances for me!!!

Oh, how I needed to read this. My son was the dentist's star patient at 2, and 2.5, and 3, so I thought at 3.5 it would be a piece of cake. Boy was I mistaken. It was an hour of hell and then I cried the whole way home, feeling like a terrible parent. And yet I scheduled his next appointment at the same time as his sister's first appointment, because apparently I've lost my mind. Glad to know your boys got better about it.

I’m going to envision that it hurt Ezra so much that he actually knocked that pesky tooth out, à la Tom Hanks with an ice skate. FIRRRE!!! 🔥⛸

I have teeth and mouth stories that will curl your hair. I neglected my mouth for over 10 years and now am fighting gingivitis and bone loss and trying to keep my teeth in my head. I've had ground bone graft replacement surgery to replace bone that has been lost because of my neglect. I've had multiple root canals and crowns in my molars. I go 4x a year for cleaning and they have to use the power water pick to clean them and to get up under the gum line. It is not fun and I am so thankful we have good dental insurance. I had horrible experiences at the dentist when I was your kids age and that was the reason for my neglect of them when I was older. And now I am paying that price. I hope the boys continue to have positive experiences so that they don't endure what I've had to.

So glad you had a great visit to the dentist. Thanks for the reminder to get off my behind and make appointments. We moved to the UK and I’m just dreading the whole “I don’t know how it all works here” angst plus a brand new celiac diagnosis.

I can hardly believe that's Ezra! I'm see a pre-teen in that photo, not the little kid who loved to cook and has, apparently, moved on. I'm so glad you got over your fear and they got over their fear and the dental visit went well. May they all continue that way.

All the HEART EYES for this post. So glad everyone took it in stride.

I am smiling because I anticipated the ending. Glad everybody got what they needed and that your shoulders didn't stay up by your ears. My oldest was a freak-outer at the dentist and probably said, "Bitch, please" more than once to the hygienist before she was 8. And then it was fine. Then she needed a tooth pulled as a teen and they gave her laughing gas just to help with any jitters and she asked if that's what being high felt like. "I'm destined to be a junkie then because whoo boy I liked that."

That's awesome! My kids are totally fine with the dentist but there are epic meltdowns when they need to go to the doctor and get any shots. The 9-YO is worse than little miss 5-YO but they both have to be physically restrained in order to get it done and they scream and cry as though being murdered. Similarly, all of our cats are now epic psychos at the vet. The eldest cat, 14, is now required to have kitty tranquilizers prior to coming in for any vet visits. It's in his record.