Never Give Up, Never Surrender

Ike, on the other hand, did qualify for summer school given his status as a Kid Who Can't Read Good. He's been making slow but steady progress and the last thing he needs is a good ol' fashioned lazy summer backslide. So he'll be spending half days in July at what we're all calling IKE'S SUPER-FUN SUMMER READING CAMP FOR READERS THAT IS NOT SCHOOL OH NO NOT SCHOOL AT ALL. 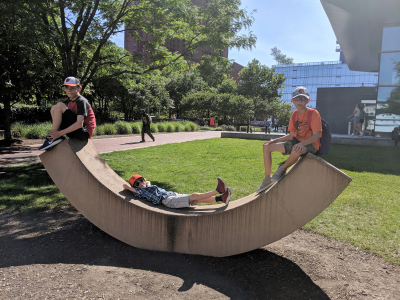 He still gets very overwhelmed when faced with too many words on a page and defaults to memorization and a lot of guessing. Although he's a pretty good at both, since those strategies managed to get him through several years of school without anyone* noticing his disability. But with a reminder to take his time (and a deep breath), he can do it. He can read it.

His writing actually resembles words now, rather than just a long string of random vowels sandwiched between the beginning/ending sounds. He made Jason a little book for Father's Day, and only had to translate one page.

("It's you and me, Dad," he explained, pointing to two stick figures who sort of resembled The Scream. "And we're going AHHHHHHH WE'RE TRAPPED IN A CARD!!!")

"He never, ever gives up," his homeroom teacher told me at our last meeting. "Even when he's frustrated. I've never met such a determined kid." 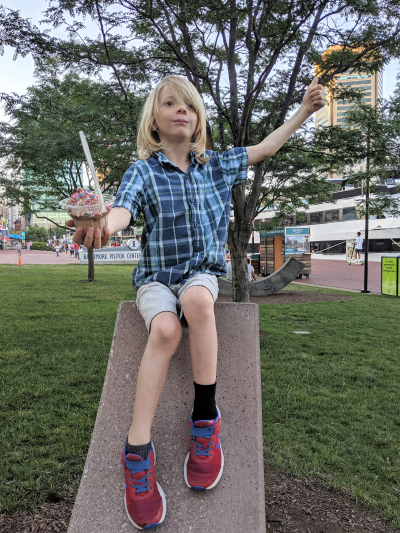 *Anyone who was NOT ME, anyway. Am I bitter or just smug? Let's just go with world's most insightful mother on the planet and leave it at that.

Tell Ike we are all rooting for him and that his hairz look especially nice.

I hope Ike has great success and fun at this not-even-close-to-being-related-to-school activities.

Reading and I always got along. Math and I? Notsomuch. I was told I was stupid and belittled and even spanked (like that would help make the numbers clearer) by my mother because multiplication, division, fractions and decimal points were completely foreign to me. I feel for Most Determined Kid Ike. I hope that someday the words come together easier for him than the numbers ever did for me.

RE: Sue W. I think we had the same childhood. College AP English and forever remedial level Math. Now I'm a Coastal Biologist! Because I cannot Math ;p

You keep on truckin, Ike; we are all rooting for you!

I have probably said this before, because Ike reminds me so much of my sister at that age in so many ways, not just the visual discrepancy disorder, but it's worth repeating. My sister who faked her way through reading from ages 4 to 7 and threw an angry fit one day because she wandered around the house and found my parents and I all reading, who sobbed her way through two solid years of trying to learn to read above a Kindergarten level and couldn't even translate her own writing until fourth grade? That sister? As an adult she is an avid reader for pleasure and has her DPT (doctorate in physical therapy. Yes, every bit as much heavy science reading as you think goes in to that.) She will never truly enjoy reading aloud, but she reads to her kids every night. She still uses a ruler to keep the lines straight when reading a medical journal and no longer even thinks about the possibility of her colleagues noticing. She reads, and there's no doubt in my mind Ike will, too.

It's probably worth a p.s. here that my Mom thinks it was a boring summer that shifted her from someone who *can* read to someone who reads for fun.