In honor of summer vacation, the boys unanimously voted for a return voyage on the Spirit of Baltimore, this time in BETTER WEATHER so they could stay OUTSIDE on the TOP DECK and also SEE THINGS.

Not an unreasonable request, since yeah, we went in December on a freezing cold rainy/foggy day, and it definitely impaired our views of the murky green water and breathtaking Baltimore industrial areas. 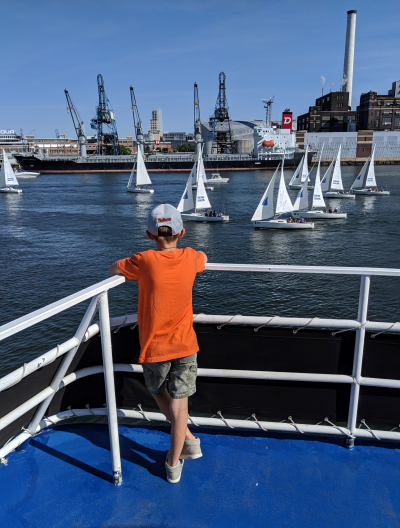 But my own snark aside, they love this stuff so much that I can't help absorbing their excitement. WE'RE ON A BOAT, MOTHERFUCKERS. 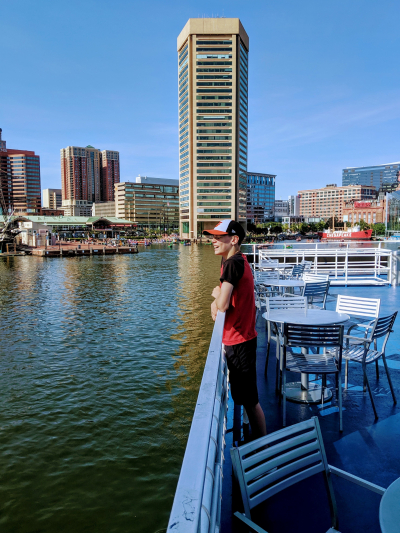 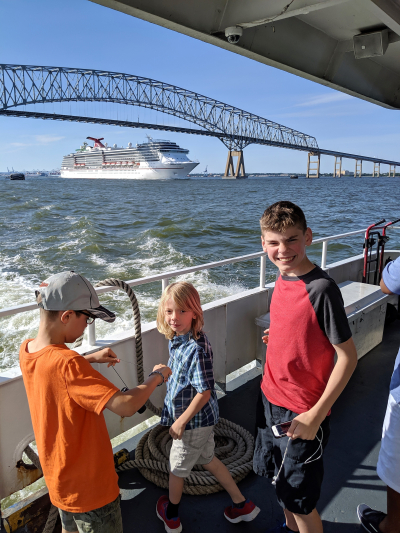 A "real" cruise ship passed us by at one point and it was a very OMG WTF BBQ ELEVENTY!!ONE!! moment for them. 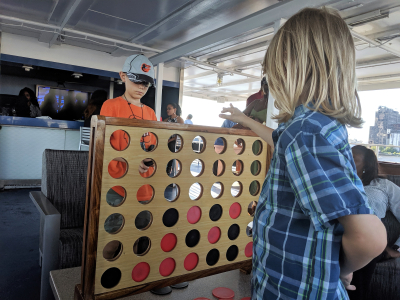 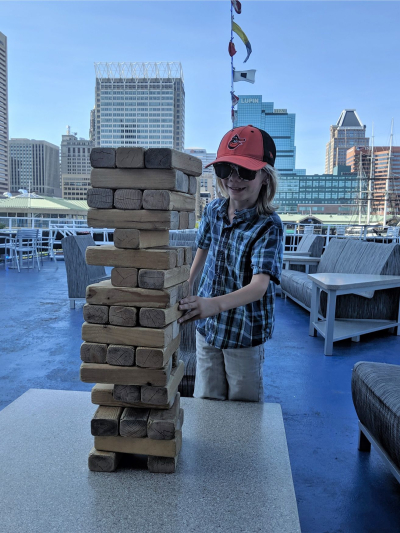 (Though this one was decidedly less cool once it fell over right on your lap and several pieces slammed into your toes.) 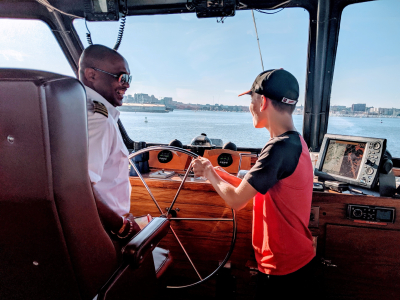 But NOTHING (not even the buffet! which had pasta and fruit and cake!!) was more exciting than being invited to steer the ship and hang out with the captain. 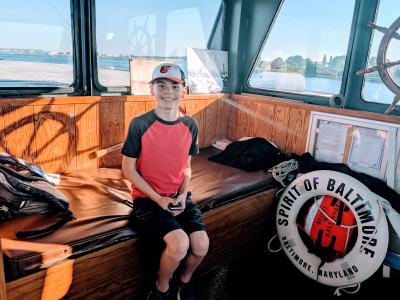 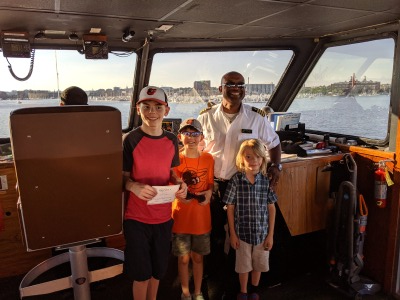 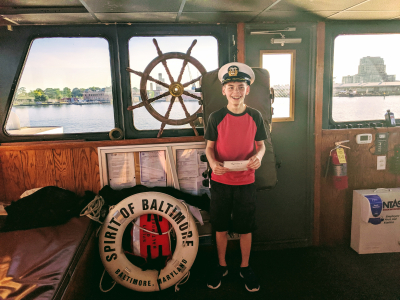 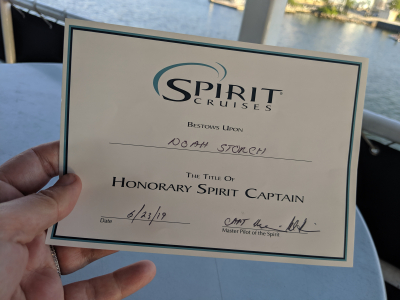 But what was probably the best part for me (I mean, besides the buffet, because obviously) was watching Noah take photos of everything and text them to his friends. 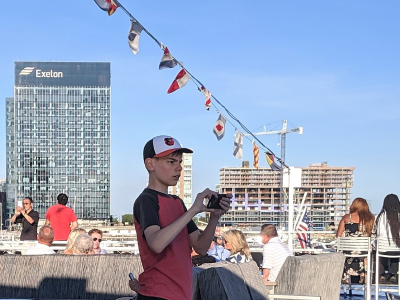 Back in March, we were told that for the first time since elementary school, Noah would not qualify for the district's summer social skills program. We pushed back and argued as much as we could, but were told that "at this point," he's already been taught and given every tool he needs to make friends and successfully interact with his peers. And he was simply choosing not to use those tools, at that point. 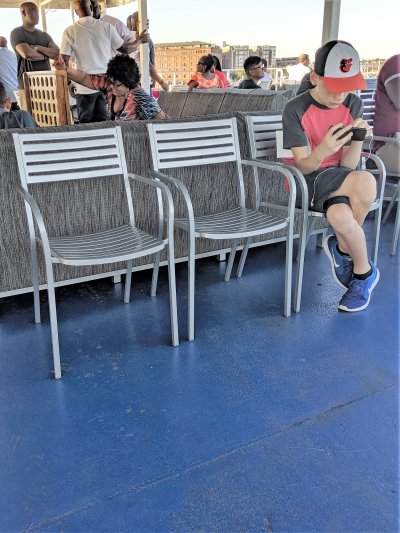 And now here he is, at this point. Just sitting there texting photos of boats to his friends, who also like boats.

Later, one of his friends will call him on the phone and they'll talk about movies for awhile. I'll overhear Noah finish a sentence, stop, and ask, "How was your day? Do you have anything planned for summer vacation?"

And then, "Do you wanna come over next weekend?" 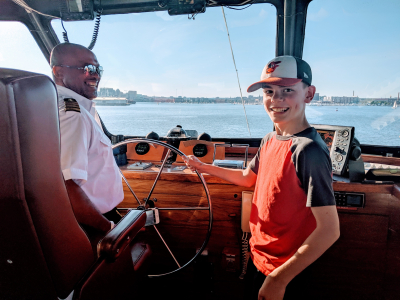 The best! Love this!

HELL YES! Initiating conversation with frenzzzzzz!
I'm so happy or all of you. Go, Noah!

I am IN TEARS. Your boy!
As a school psych I have heard the "your child has the skills, they are just not choosing to use them" and see parents absorb that information. And THEN HE IS CHOOSING TO USE THEM!

Your kids are great and you and Jason are great parents.

I find the "he's choosing not to use the tools" comment really... not helpful. Of course he WOULD use the tools if he were easily able to do so! It makes it sounds like the choice is all up to Noah, when really, social is really hard. Humph. I see the school's point that teaching and practicing social skills is not the same thing as doing it "in real life," but they could have worded it better.

Our guy is also finding his way to the toolbox here and there - its very exciting. Yay, Noah!!!

Love. That is all.

Goooo Noah 🙌🏼🙌🏼🙌🏼🙌🏼 Also - I hair read this article the second after I read your post. Let’s all imagine the hilarity of the boys making a major drug bust in the Baldimore Harbor Lol
https://thehill.com/homenews/state-watch/450331-10-million-dollars-in-cocaine-seized-in-shipping-container-at-port-of

Gah! I teared up.

Go, Noah, you social butterfly you! My heart is singing for you and Jason.

What an awesome post! All, The. Feels.
So happy for Noah that he is making friendS (plural!)

Oh my gosh! Noah is just BEAMING! That last picture is just too perfect. He looks more and more like Jason (in my opinion) the older he gets - cutie pie! You know, I love how individual each of your kids is. I know that's a weird thing to say, but I only have one kiddo, so I don't have to wrangle a crowd of personalities, traits, faults, fears, loves, etc! I really feel like you guys have been challenged and have done so well by each of them, making sure they get to be EXACTLY WHO THEY ARE. And isn't that what we need more of in this world? :)

I've had some slow days at work recently and ended up going back and reading through your archives, starting when you were pregnant with Noah. (I'm not a creepy stalker, I swear, I just REALLY miss those days of parent blogs that followed stories of TTC, pregnancy, birth, raising babies, etc. Does anybody do that any more!? Probably if they do they're like 15 years younger than me at this point and I couldn't relate ANYWAY so whatever). All that to say, this post is a wonderful cap to the story that I have just re-read, almost like a novel with a big YAY NOAH moment at the end. Very awesome, is what I'm saying:).

Love it. I actually got goosebumps.