1. First, they will attempt to convince you to also join an amateur ping pong league, as their team needs three more people.

3. They will text all your friends to see if THEY want to join an amateur ping pong league.

4. Your friends all respond with their personal favorite variation of a WAIT WHAT? gif and then politely change the subject.

5. The league will manage to sign up three other teamless/friendless losers and complete the team.

6. They will volunteer to be team captain because "nobody else wanted to."

7. They will be lying. And also a little giddy.

8. It's actually kind of cute!

9. A very specific, very fancy ping pong paddle will arrive in an Amazon box. You will laugh at the fancy box and ask them if they actually plan to carry the paddle around in the fancy box. They will say no.

10. They will be lying. A specialty paddle care and cleaning kit will show up along the way too.

11. They will go to their first match.

14. The next box from Amazon contains four less-fancy paddles, a bunch of balls and a portable net that attaches to your dining room table.

15. This means you and the kids can help them practice ping pong! See, you're being included. As a family. It's all so fucking wholesome.

16. They will ask you to come to the next match. You will agree because there is beer.

17. One team member can't make it to the match, and everyone will look at you expectantly, like, do you want to fill in?

18. You will scream, melt into the floor, and slither off like a puddle of bloody goo, or those possessed people from Stranger Things 3.

19. Then you will politely say no and blame your lack of a hair tie.

20. A very, very large Amazon box will arrive, containing a full-size folding ping pong table that also attaches to your dining room table despite being entirely too large for your dining room. They will blame a simply too-good-to-pass-up Prime Day deal.

23. Everybody buys another beer and agrees to label their paddles more clearly.

24. Their team somehow advances to the playoff rounds.

25. Your dining room table is now home to a giant-ass net and a rotating ping pong robot.

26. The ping pong balls will multiply across your house like stray socks and dust bunnies.

27. Five minutes after arriving for the ping pong championships of the world this one specific Baltimore neighborhood, they will learn that one of their teammates has been in a car accident and (while fine and unhurt!) is unable to make the match.

29. You will look at the hair tie around your right wrist.

31. And that's how you, despite having never played a single actual competitive match of ping pong in your entire life, will end up playing in multiple final rounds of an amateur ping pong league on a Monday night when you totally could have stayed home and watched Queer Eye instead. 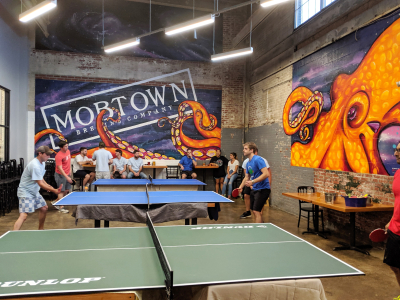 32. You will also lose all of your matches, but at least will not lose them wholly spectacularly, and your team of fellow ragtag underpongs will manage to snag third place.

33. It will also be understood that you will be the teams' new designated sub for next season, which starts in...three weeks.

34. You will go home and spend some time with that ping pong robot, because next time you're going to fucking WIN and DESTROY and IN SUMMARY:

And when the kids go to bed? BEER PONG, of course! With a decor-matching half-size keg next to the table.

Change of topic: I seem to remember Noah is into the Titanic. Did you know they're building a replica? No chance any of us mortals will actually get to sail on this sucker, but here's fun CGI video with the deets: https://www.cbsnews.com/news/titanic-clive-palmer-blue-star-line-southhampton-new-york/

CLASSIC Amalah post! (I'm wayyyy partial to the listy ones.) I'm sure the cats can help locate any stray ping pong balls, and then not let you take them away because TOYYYYYZ MOM! Thus, you will have to buy "non-competition/practice" balls, but they won't be fancy enough and then there's the issue of what if the doggies get a hold of one... CAT TOYS THAT SIMPLY LOOK LIKE PING PONG BALLS. This is turning into a very expensive hobby.

Oh, and extra points if you call your team Balls of Fury, or Little Lebowski Urban Achievers. :)

Underpongs? Snort laughed at that. (My boss is a pingponger and keeps trying to make me 'come along for fun'. I see it now. They are a cult. A gentle, pointless, nerdy cult. Pass the paddle!)

Lots of memories of playing pingpong in our slightly creepy basement. I can't imagine my mother giving up her dining room table for pingpong (and it would have broken her rule of "no balls in the house").

Halfway through the list, Ping Pong Girl was stuck in my head, so it was a goddamned delight to find it at the end of the list. That ping pong robot, on the other hand? Slightly ominous in a way I just can’t put my finger on.

This is HILARIOUS. I too stink at ping pong (and every other form of sportsball - even bowling). People have a hard time understanding when I try everything to weasel out of playing - they think it’s FUN. (I’ve had more fun at the dentist.) I’m rooting for your transformation into awesome, indifferent ping pong girl.

PLEASE have someone film you after you’ve fully morphed into Ping-Pong-Monica-In-Barbados. (You’re already halfway there!)

@Shelley HEY U WANNA BE A SUB FOR AN AWESOME PING PONG TEAM? THANKS

Right at the first item I thought about Ping Pong Girl and wondered if you’d reference it ... and there it was, a little 💎 at the end

This is so great.

So all things ping pong are the Abandoned Tire of 2019?!

This made me lol

At least they call it PingPong. If they were REALLY into it, they would INSIST that it be called Table Tennis!! Have fun.

Love all of this.

Haha, I can totally relate to this because it's exactly what happened to me with an... adult dodgeball league!!

This made me laugh all the way through. Go get ‘me, girl!

Wait! Queer Eye is on these days? Excellent!

Oh, and I must add: Ping Pong Tables need to be in the basement. It's like a natural law of nature. Carry on.

I love every single letter of this post. Oh My God. And also, I might need that ping pong robot and net...

this was amazing. And that ping pong robot. Want.