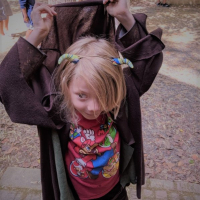 This is our last week of summer vacation, and I am sick with a head cold that I suspect I caught at the Renaissance Festival this past weekend. (Though given the lengths some people go for 100% time-period accuracy I should be grateful that it's just a cold and not the plague or smallpox.) (This is also accurate. He has a new costume for next weekend that's some sort of muscle-bound executioner. He's looking forward to sentencing people to death for littering and/or cutting in the privy line.) (Ezra also has a wonderful new costume that didn't arrive in time for opening weekend so he had to go with Alexander Hamilton and was NOT HAPPY ABOUT IT. And although he received multiple compliments on his "fine nobleman's jacket," he told anyone who would listen about the Great Costume Injustice. "I wanted to be a scribe but Dad didn't order my costume in time and so they made me wear this instead." [NOBODY MADE HIM WEAR ANYTHING!!] He was later distracted by Many Foods On Sticks and then a side quest for find the Perfect Author's Satchel. Which: ??? I dunno but it cost me $28.) (Yeah. I know. Those weren't... Read more →

Hacking the Back-to-School Hand-Me-Down (plus GIVEAWAY) 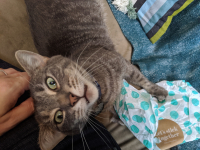 This post is sponsored by thredUP. photobombin ur sponsorships again yay You might think that, with three boy babies, the hand-me-down game would be pretty straightforward. And for awhile, it was! I shuffled onesies and footie jammies from child to child, removing anything too worn out, replacing the modest wardrobe gaps only as needed. As they grew, the hand-me-down bins got a little bigger and keeping them organized got a little more challenging (still never found that missing bin of size 3T shorts, btw!!), but overall, our annual back-to-school closet lift-and-shift system worked. And then the babies grew into people. People with opinions. Noah and Ike prefer to live in the standard-issue boy-uniform of Under Armour shorts, Old Navy jeans, and a variety of graphic tees. (Though by the time Noah's clothes shuffle on down the chain, Ike's been ending up with fewer and fewer wearable options.) They're doubly easy because they both like anything that's blue or orange. Any old video-game character will do. They each pick out one pair of (blue) sneakers and wear them until they fall apart, and will happily walk out the door in clothing that's visibly ripped or stained or inside-out if I'm not... Read more →

We're currently getting the back deck and wood trim painted, which is one of those homeowneryship things that costs like, ALL of your money and leaves you with...well, everything pretty much looking exactly the same as before. (They're also power washing the siding, which has grown slightly greenish since we moved in, so we at least get to Make Yellow House Yellow AgainTM.) It's a very unsexy unfun home improvement, and it's taking forever because every day it starts raining right after the crew shows up. (That has got to be one of the All Time Top 10 Most Exciting Paragraphs I have ever written in the history of this blog, no? Perhaps later I shall set up a live video feed of the freshly painted window trim so we can all watch it dry together.) This morning they asked me to remove all the window screens, which I did, while the cats looked on in escapist glee. I of course managed to injure my fingers not once, but twice in the process, and drop one screen down the side of the house. ("HEADS UP!" I yelled to absolutely no one below, for no discernible reason.) Then I grumbled and... Read more →

A couple weeks ago, Jason ordered a life-size Pennywise cutout to prank Noah with. It's HORRIBLE. Truly the devil's own work in laser-cut novelty cardboard. I mean, look at this shit: First Jason hid it in Noah's room -- and then hid himself around the hallway corner, phone in hand and set to record. Noah's initial reaction was actually unimpressive. A quick GAH!! and a door slam, and then a wise-and-exasperated DA-A-AAAD. The next morning the stupid thing was positioned directly outside MY bedroom door, and the kids were treated to a much more hilarious OH SWEET JESUS CHRIST reaction from me. It now lurks around every corner and doorway. Ezra and Ike claim to hate it, yet are thoroughly delighted with the ongoing game of "startle the grown-ups out of their wits" by moving it around the house. Walking in from the garage? Doing laundry? Stepping out of the bathroom? THAT'S NICEEEEEEE. (I admit that I regularly put it right in the garage entryway to scare Jason because I am a petty child. He always blames Noah, and thus restarts the Great Jumpscare War all over again. It's the cirrrrrrcle of Storch.) One time I caught Noah in the... Read more →

Our marriage is now officially old enough to buy its own beer. Which was not something either of us could do (...legally, anyway) back when we started dating. Or something half of us (me) could do when we got married. (I miss that dress. And those shoes! The Dharma haircut not so much.) 21 years, several crappy apartments, even more crappy jobs, a couple massive political/religious 180s, seven moves, seven pets, nine tattoos, one beard, a few pounds and three kids later, he's still my favorite person on earth, and I'd marry him again tomorrow if I could. But since we already did that last year, we're going to do this instead. You can take your relationship (way, WAY) out of the 90s, but I guess you can't take the 90s out of the 40-something Gen Xers who are like, SO PUMPED FOR IT. Happy anniversary, J. Thank you for this wonderful life I get to live with you. Read more →