A couple weeks ago, Jason ordered a life-size Pennywise cutout to prank Noah with. It's HORRIBLE. Truly the devil's own work in laser-cut novelty cardboard. I mean, look at this shit:

First Jason hid it in Noah's room -- and then hid himself around the hallway corner, phone in hand and set to record.

Noah's initial reaction was actually unimpressive. A quick GAH!! and a door slam, and then a wise-and-exasperated DA-A-AAAD.

The next morning the stupid thing was positioned directly outside MY bedroom door, and the kids were treated to a much more hilarious OH SWEET JESUS CHRIST reaction from me.

It now lurks around every corner and doorway. 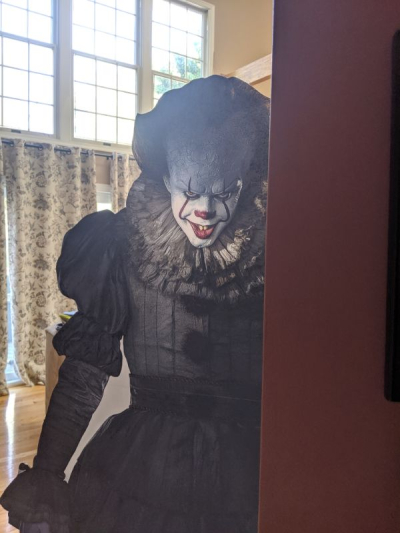 Ezra and Ike claim to hate it, yet are thoroughly delighted with the ongoing game of "startle the grown-ups out of their wits" by moving it around the house.

Walking in from the garage? Doing laundry? Stepping out of the bathroom? THAT'S NICEEEEEEE. 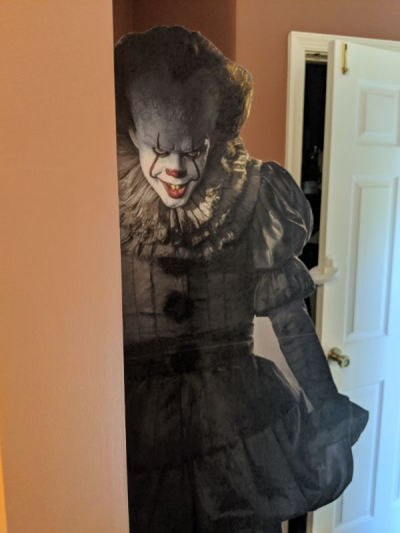 (I admit that I regularly put it right in the garage entryway to scare Jason because I am a petty child. He always blames Noah, and thus restarts the Great Jumpscare War all over again. It's the cirrrrrrcle of Storch.)

One time I caught Noah in the act outside our room and drop-kicked the thing off the landing into the family room below. Then Jake sat on it. So it's starting to look a touch dented. The kids are insistent that we HAVE to keep it until AT LEAST Halloween, however, so I decided to store it in our basement storage room. WHICH! Backfired spectacularly, when I went down in search of a gift bag.

In retrospect, I definitely played myself there.

Instead, we've taken to using him as a little extra home security at night, and an extra reinforcement of our NO SOLICITING sign during the day. 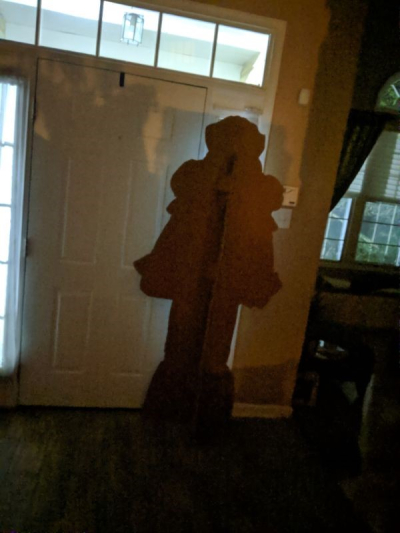 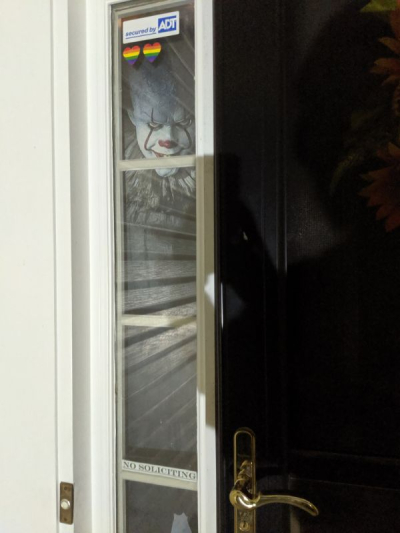 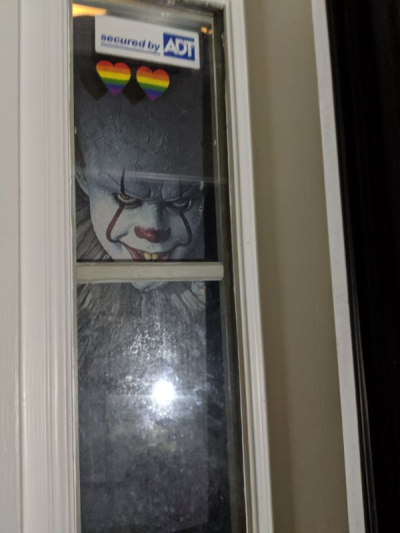 Love is love! But we'll pass on the magazines and gutter covers, thanks.

I'm trying to imagine my two girls (admittedly still pretty young for this game at 9 and 4) if we tried this. I'm pretty sure they would pack their bags and move to Grandma's house.

THAT IS SO SPECTACULARLY CREEPY AS FUCK!!!!! I really would order one for my front door window, but I can't handle having Pennywise in my home in ANY form, just in case he comes to life... like a creepy doll or something... good luck sleeping!!!! :)

I love all of this and you made me laugh more than is probably reasonable when one is at work. My 9YO would love this since he's still into dumb jump scare games like FNAF.

Oh my god... I'm certain my children would all leave home... And my husband too, since he's opposed to all things scary.

The good news: You can extend the fun into ye olde Yuletide by hanging ornaments on the back of him.

I had to click through and comment just to say that this is amazing and evil and beautiful.

We do a trunk for the elementary school trunk or treat every year. This year, we storyboarded a Stranger Things (my fave), a Scary Stories and an IT trunk. It won, hands down. Simple, direct, scary as all get out. We're going to make a rain gutter river, a sewer grate you must reach through to get candy, paper boats and maybe a yellow rain slicker hat just because. I think I need my own cardboard Pennywise now.

The last few pictures made me actual-LOL. You guys are great.

Back in the 90s I bought a cardboard cutout of Bill Clinton and used it to a similar effect in my childhood home (I was in high school). At first it was just hilarious to walk into a room and see Bill standing there but then occasionally my mom would head down to the never-used-unfinished basement and SCREAM because there was a man in a suit with a seemingly friendly smile on his face standing there. My parents moved while I was in college and when I came home they sent me into the storage room looking for something and there was Bill waiting to freak me out.