Ages and ages ago, Ezra was formally diagnosed with ADD. His teachers all reported a lot of trouble with his attention and focus at school, and after a lot of back and forth and assessments and whatnot, we decided to go ahead and give medication a try. (Noah has severe ADHD so it wasn't our first medication rodeo.)

Sure enough, after a month or so, the teacher reports and assessment forms all indicated marked and noticeable improvement. It worked!

We dropped the entire topic after that. I never told his teacher anything changed, and she never brought up any attention-related concerns again.

In the years since, though, hoooooooooooo-boy. The placebo effect has NOT carried over at all. Every teacher and coach and camp counselor has the same report: Ezra is very smart and talented but struggles to pay attention. Ezra requires constant reminders to stay focused on what he's doing.

We saw it too. He's not hyperactive at all, but he's just...so scattered and distracted. Music and swim lessons and cricket games -- all things he loves to do and really wants to excel at -- are a constant battle of EZRA EZRA OVER HERE EZRA. His handwriting was illegible. His grades started to slip. I'd find dozens of title pages and half-drawn bits of comics and short stories that he'd start and re-start over and over again. I repeated myself constantly. EZRA EZRA EARTH TO EZRA.

He developed a nervous tic with his hands and mouth back in...yikes, preschool that we've been waiting and waiting for him to outgrow. Instead, it just got worse and worse each year. He couldn't stop it, he told us, because "it's how I get my brain out of my daydreams and back into real life."

(He actually got permanently benched last season in cricket because he simply could not stay focused on the ball and it would roll right by him while he stared into space and ticced and ticced his hands. The coach could only yell "EZRA READY POSITION!!" so many times before giving up.)

We did all the standard recommendations to help with organization and focus and study habits. I took him to rule out hearing and vision problems. (He is a touch near-sighted in one eye, but his teachers always put him in the front row already, so it's unlikely to be the cause of his school issues.) We tried fidgets and the noise-cancelling ear muffs and wiggle chairs.

So a few weeks before school started, we took him for a fresh re-evaluation for ADD.

He feels great. He's doing great. His tic disappeared almost overnight. His handwriting is better. He tackled a back-to-school art project that was due in five days and completed it in one. His flute teacher is just like, "wow." He started writing a new book. It's about a cat family who moves to a farm. 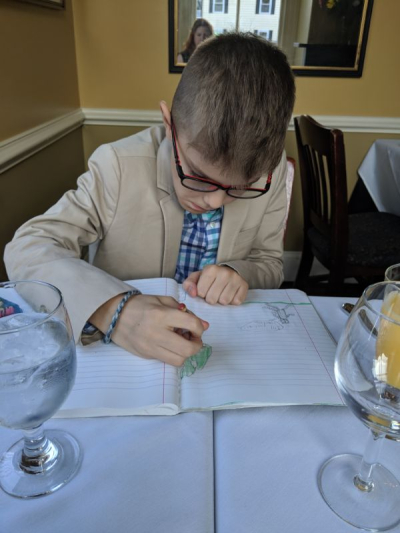 So far he's on chapter five. 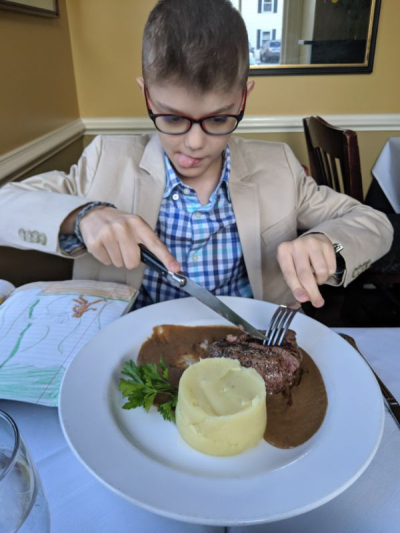 (And he's definitely swallowing the pills this time. Don't think I didn't turn all his pockets inside-out already.)

Thank you, I really needed to read this. I've been considering having my 8-year-old evaluated for ADD for a while now. And just recently spoke to his second grade teacher from last year about her opinion on the matter. This might be the push I need to actually call and make the appointment.

Ezra plays the flute! I love it. Music has, many times over, saved my life. Dramatic? Maybe but it’s true. The flute is a beautiful and fun instrument and I hope he loves it as much as I do.

I'm proud of you for letting it go for awhile before re-evaluating. I worked for a pediatrician who gave every kid who could SPELL ADHD pills and it really bothered me. Now you know he truly needs them and I'll bet everything will continue to improve! Who knows, he might start writing a cook book! :)

Please tell me what are these "standard recommendations to help with organization and focus and study habits". My girl also has ADHD, and is good at swallowing pills, but HATES to strategize or problem-solve, and I am terrified of what the school year (Grade Six!!)) has in store for us.

So glad that Ezra is getting what he needs!

I couldn’t swallow pills until I was (disturbingly close to almost not) a teenager and still struggle if they’re uncoated or too large. In case anyone has a kiddo who has trouble with this, the two things that really helped were sipping the wash down drink with a straw and practicing with mini (and then regular) M&M’s.

I have a friend with a just 15 year old man-child. Despite it being very obvious that he had issues from toddlerhood, and an evaluation at 6 that revealed ADHD, his parents decided not to medicate. This kid is very bright, has a lot of potential, but struggled with concentration, outright aggression borne of frustration, friendships - the works. It has affected every aspect of his life to this point with constant behavioural interventions by the school etc etc . This spring, this kid went back for a re-eval and requested he be allowed to try medication himself. The change is monumental, even from the peripheral view point of a family friend it was immediately evident - I didn't know he had sought advice and meds but could see an enormous change in his outlook, his physical demeanour, his ability to interact with my kids, his communication with me as an adult. For the first time I can see a different path for this kid, one that doesn't involve entanglement with the law through impulsive behaviour that he alone can't control! The difference is quite simply astounding and by all accounts, he is absolutely flying at school, in sport and in other extra-curricular activities. I get that meds are not for everyone, but for some - they are the difference that makes their world a happier place.

So glad Mighty Zah is getting the help he needs and is doing well. Thank you for sharing your boys through the good times and the not so good times that eventually become good times as well.

Tersiguel’s? That was where my (now) husband and I spent our 4th anniversary (dating) — it was our first “fancy” restaurant :-).

Yay! I'm glad it's helping. It's always a struggle to decide on meds, but when they are truly needed, they are worth it a million percent!

I was that kid, diagnosed by my teachers in the 1980s as "lazy and irresponsible" (the nicer ones said "daydreamer"). Diagnosed at 30 with ADHD primarily inattentive. Never been hyperactive a day in my life except my first day on Adderall when I took the prescribed amount which was WAAAAAAAAAY too much. But now I take an extremely low dose and am still daydreamy and forgetful and underproductive but don't have to do constant battle with my own brain just to function. So that's nice. Hope it keeps working out for Ezra.

I'm so glad he's getting the help he needs. :) I have ADD and my tics are worse on days when I don't take my meds. It can heighten my anxiety though so I have to balance it out.

I did want to mention this though...sometimes adolescents can actually have depression and it looks like ADD and the ADD meds can make the depression worse really, really quickly. It's not very common but it's something I wish I would have known so I'm sharing here just in case. If you have an adolescent on ADD meds really be aware of their mental state for the first few months after they start taking them.

My nieces are both on meds now and it’s helped them so much. The nine year old has pretty bad ADHD. Once she started meds, she could focus on her work, she stopped getting frustrated and running away from her class. She stopped being angry all the time. The 11 year old was just scatterbrained and messy. She’s now able to organize herself and keep her stuff together.

I’m so glad you’re getting him the help he needs. My husband had ADD and at nearly 40 he still struggles with staying focused. He’s tried various meds in the past but has just now found one that works for him. I can’t help but but think how much easier his life might have been if his parents had gotten him evaluated and treated back when he was in school. I’m so happy that Noah and Ezra have been learning techniques to help them focus as well as utilizing medication. Those are hard to learn as an adult. You’re such a great parent. I really wish more kids had parents like you and Jason.

I really appreciate all the ways you share the tricky parts of life with real, wonderful kids. My daughter was just diagnosed with anxiety at 5 (like mother, like daughter) and sometimes I feel so terrible that she has my same struggles. It is so helpful to see your wonderful boys thriving as you work and discover and help them get what they need to keep being successful and happy. It helps me stay positive when I feel (surprise!) anxious. I love this post-and this blog- so much. Thanks for writing it!