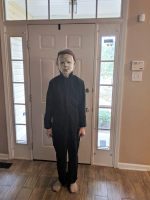 Noah Laughing from amalah on Vimeo. The sweet little baby who once laughed maniacally at a baby doll falling to its doom is now 14 years old. Here's his Official Birthday Portrait: Adorable!!!!! His penchant for horror movie villains aside, I couldn't be prouder of this smart, kind, gentle-hearted kid. Who loves animals and art and coming home to see freshly-baked cookies in the cookie jar. (We're both obsessed with the Reddit Murder Cookies, which are, in fact, totally killer and I've baked at least a batch a week since discovering them.) He's as tall as I am but still could use a hug after a long day and who doesn't yet completely find us to be the absolute worst. In fact, he seems to actually like us an awful lot, except when we're making him practice his saxophone. He's auditioning for Honors, Gifted & Talented AND All-State bands this year. He's not happy about it, but understands that -- sighhhh -- such is the burden of musical talent. He'd rather spend hours drafting his own ship design blueprints and building 3D versions on his computer (and then purposely sinking them, because TITANIC but also physics and reverse engineering). He's... Read more →

And the Emmy Goes To 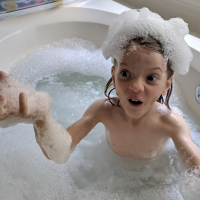 Right. So I came here, blamed my lack of posting on my keyboard, bragged about my fabulously stable mental health and newly-restored ability to type commas...and then promptly peaced out for the rest of the week. Sorry. I accidentally watched that Back-to-School Essentials PSA video and had to go back to bed and cry for two days straight. (If you don't know what I'm talking about and are tempted to click that link...go ahead! Ruin your damn day! What do I care! Just wash all your eye makeup off first, find a nice safe corner to curl up in, and grab a pillow to muffle your sobs. Also try not to watch it while your children are literally walking out the front door to their bus stop like I did.) ANYWAY. Hair flip, check mah nails, change the goddamn subject. Today Ike starts an after-school drama program, the result of YEARS of me hinting/suggesting/pleading with him to put all of that copious ham and cheese where it belongs: THE STAGE!! (In tonight's performance, the role of Yorick's Skull will be performed by a fistful of bubbles.) The show is Elf Jr. (the Musical). And Ike is ready to play an... Read more → 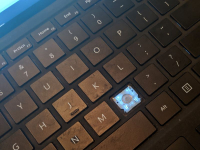 Whenever my blog posting frequency starts to dip, I notice a slight uptick in semi-concerned texts and emails. AMY R U OKAY R U OKAY AMY? Perfectly understandable, given the wild brain ride I've dragged everyone along on over the past...year? Two years? (I dunno, check the archives and see if you can pinpoint the exact second this blog became less "ha ha ha, let's all laugh at an exaggerated yet breezy re-telling of some dumb thing I did" and more "wow I am truly a dumb scrap of worthless jittery garbage but like...ha a aaa? ha HaAAAa? is ThIs How u d0 teh HumoR?") But I am okay! Very, very more than okay! The best I've felt in a very long time! My keyboard, on the other hand... Truly the REAL dumb scrap of worthless key-shedding garbage. The comma key fell off about...two months ago, and I kept stubbornly attaching it over and over again, only to have it pop loose again a few sentences later. So then I'd re-attach it again, but HARDER. (And since I route my text messages through Google Hangouts, this meant SEVERAL of those "hey just checking in hope all is well" texts got... Read more →

The Youths of Today

Noah saw It Chapter Two on Sunday with his dad and his best friend.* I chickened out and stayed home to surf Netflix in search of Other Soothing Shows with People Being Nice to Each Other Over Low-Stakes Things. (Now that Netflix has chosen to torture me on a deeply personal level by limiting my GBBO habit to one measly new episode a WEEK, like WHAT IS THIS, the dark ages? 2007?) Anyway, they had a blast. Much junk food and jump scares were enjoyed by all. Noah's review is that it's very good, pretty true to the book, kinda long but that's fine because he WAITED a long time for it, and not as scary as the first one. He really, really likes Bill Hader now, so I've spent the week compiling a best of Stefon playlist to watch with him this weekend. (No, I will def not let him watch Barry but you def should, I command it.) Here's something I was not expecting: Parenting a teenager is actually a lot of fun. And to think I was so scared of them, especially the ones in packs. But instead, it's awesome. You get to finally like a lot... Read more → 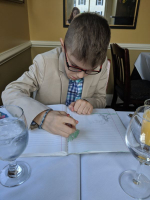 Ages and ages ago, Ezra was formally diagnosed with ADD. His teachers all reported a lot of trouble with his attention and focus at school, and after a lot of back and forth and assessments and whatnot, we decided to go ahead and give medication a try. (Noah has severe ADHD so it wasn't our first medication rodeo.) Sure enough, after a month or so, the teacher reports and assessment forms all indicated marked and noticeable improvement. It worked! And then I found a couple pills in his pants pockets. And then I found the rest in the bottom of his laundry hamper. He'd never figured out how to swallow them, didn't want to admit that he couldn't swallow them, and thus, never took a single dose. We dropped the entire topic after that. I never told his teacher anything changed, and she never brought up any attention-related concerns again. In the years since, though, hoooooooooooo-boy. The placebo effect has NOT carried over at all. Every teacher and coach and camp counselor has the same report: Ezra is very smart and talented but struggles to pay attention. Ezra requires constant reminders to stay focused on what he's doing. We saw... Read more → 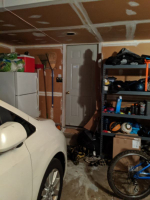 I currently have about a half-dozen questions of the Baby Sleep, How To Fix It, Oh God I'm So Tired variety in the Advice Smackdown queue.* And yet there is nobody around to tell me how I'm supposed to sleep with this bloody thing still moving around my house. They've more or less tired of the Jump Scare Game (though I've yet to let my guard down any time I open a door or turn a corner, which is a LOT of work in this ridiculously door- and twisty-corner-laden house), but I'm forbidden from getting rid of the clown until after Halloween, because they apparently have Plans. (Plans to get us dis-invited from every nice family neighborhood get-together, I'm assuming.) I finally shoved it (sorry, capital "It," can't disrespect a proper noun) out in our garage, facing a shelf in a well-lit area so my brain clearly registers it as a large piece of harmless cardboard vs. the hulking shape of death propped ominously in a far dark corner. (Which: Tried that. I died. The End.) Also, the door blocks it more or less entirely on your way out. Unfortunately, I didn't think about the other angle until I pulled... Read more → 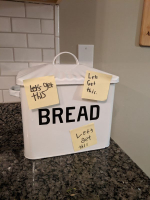 (Do not ask, as no explanation shall be given.) It's the first day of school. If you're counting along at home, this means: 1) They're 8th, 5th and 3rd graders now. 2) It's the first day of Noah's last year of middle school. 3) It's the first day of Ezra's last year of elementary school. 4) It's the first day of Ike's last year of attending the same school as at least one of his older brothers. Next year we'll be spread across the elementary, middle and high schools, and our morning routine will turn into a never-ending hellmouth-y marathon of competing alarms, departure times, and somehow -- I am sure of it -- even more cereal. 5) WE'RE ALL VERY OLD AT THIS POINT. Once AGAIN, Noah is ~not pictured~ as I mercifully freed him from the first-day photo ritual. Just picture the little tiny turtle baby you so fondly remember, only as tall as I am and with much larger feet. Also some facial hair, WHAT IN THE WHAT. ("It's not like this is something to celebrate!" he fumed. "Summer is over and school is here to ruin everything AS PER THE USUAL." Then he slipped his headphones... Read more →