I currently have about a half-dozen questions of the Baby Sleep, How To Fix It, Oh God I'm So Tired variety in the Advice Smackdown queue.* And yet there is nobody around to tell me how I'm supposed to sleep with this bloody thing still moving around my house.

They've more or less tired of the Jump Scare Game (though I've yet to let my guard down any time I open a door or turn a corner, which is a LOT of work in this ridiculously door- and twisty-corner-laden house), but I'm forbidden from getting rid of the clown until after Halloween, because they apparently have Plans.

(Plans to get us dis-invited from every nice family neighborhood get-together, I'm assuming.)

I finally shoved it (sorry, capital "It," can't disrespect a proper noun) out in our garage, facing a shelf in a well-lit area so my brain clearly registers it as a large piece of harmless cardboard vs. the hulking shape of death propped ominously in a far dark corner. (Which: Tried that. I died. The End.) Also, the door blocks it more or less entirely on your way out.

Unfortunately, I didn't think about the other angle until I pulled my car into the garage late at night and 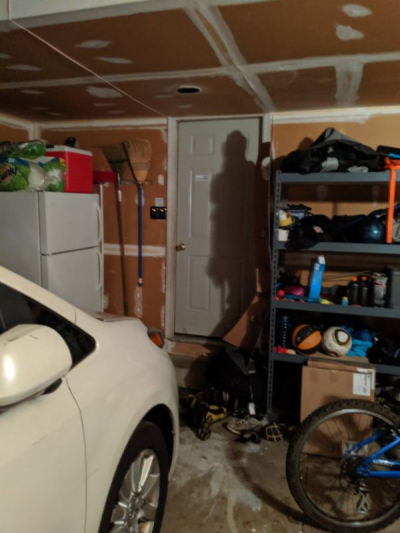 I died again! Christ, these sequels are getting repetitive.

And speaking of sequels, Noah has decided that yes, he absolutely 100% wants to see the new It movie in the movie theater. This, the child who made us walk out of The Lion King and cried hysterically over the floating house from UP (but not the opening montage; that was fine; sorry ur wife is dead o well) and who still considers being taken to see The Force Awakens to be an act of straight-up emotional abuse.

I agreed -- I actually do love scary movies but prefer them from the comfort of my own couch where I can leave the lights on and drink a lot of wine and thus be imbued with that special alcohol-fueled confidence that I could totally survive whatever terrifying scenario I'm watching. GIRL DON'T DO THAT OMG U DUMB U DESERVE TO GET GHOST-MURDERED IN UR GARAGE. So I asked Noah what he'd do if I get scared and start crying/asking to leave.

He thought about it for a minute and then offered to let me wear his old noise-cancelling earmuffs. He's a very nice, kind human. I suppose I'll be in good hands.

(And then I'll probably put Pennywise in his closet, just to restore the balance.)

*Still open! Still a thing! Ask me stuff and watch me ramble on for at least seven more paragraphs than necessary! Other areas of questionable expertise include JESUS CHRIST PLEASE EAT SOMETHING BESIDES GOLDFISH CRACKERS and Potty Training, How To Do It, For The Love Of God Stop Crapping Your Pants. In retrospect, I should have re-named the column Eat, Sleep, Poop a long time ago. But I also get a lot of crazy MIL stories too, all of which give me Petty Rage Life, so don't ever stop sending me those. AMYADVICE [AT] GMAIL DOT COM Y'ALL.

Do you have any movie theaters that serve booze nearby? Though I suppose you still have to stay sober enough to drive home :P

I think it was on the advice smackdown one time that someone asked you about looking at least halfway pulled together as a new mom and you said that well groomed eyebrows were the secret and maybe you said other things too, but I have clung to that one sentence through having two babies in seventeen months while my husband was in medicine residency and I looked like hot, unshowered garbage, but with plucked eyebrows so obviously the rest of it was a *look* and not *having given up* because AMY SAID SO. Not to worry, I never brought your name into it, outside of my own sleep deprivation addled brain. But thanks for making me feel better.

hahahahah! That shadow is the worst! I will not be seeing either of the new IT movies. Just can't do it.

I kind of want to make up drama just to send to the Advice Smackdown so you can give me advice.

Yet another reason it would not have been good for me to have kids and especially the boy kind! I do not like movies like that and if they did something like that to me, I would just up and die right there on the spot!

I second the Booze-serving movie theatre. That's what UBER is for!

I took my 13 year old son to see It 2 this weekend. It is a LOT bloodier and scarier than the first one. Be warned. Plenty of jump scares but also heavy on the unsettling creep factor. My son swore he would not be able to sleep alone afterward...but he did. I, on the other hand, am backpedaling from my thought to purchase a Pennywise for Halloween. I don't want to ruin clowns for an entire generation of small folk.