The Youths of Today

Noah saw It Chapter Two on Sunday with his dad and his best friend.* I chickened out and stayed home to surf Netflix in search of Other Soothing Shows with People Being Nice to Each Other Over Low-Stakes Things. (Now that Netflix has chosen to torture me on a deeply personal level by limiting my GBBO habit to one measly new episode a WEEK, like WHAT IS THIS, the dark ages? 2007?)

Anyway, they had a blast. Much junk food and jump scares were enjoyed by all. Noah's review is that it's very good, pretty true to the book, kinda long but that's fine because he WAITED a long time for it, and not as scary as the first one. He really, really likes Bill Hader now, so I've spent the week compiling a best of Stefon playlist to watch with him this weekend. (No, I will def not let him watch Barry but you def should, I command it.)

Here's something I was not expecting: Parenting a teenager is actually a lot of fun. And to think I was so scared of them, especially the ones in packs.

But instead, it's awesome. You get to finally like a lot of the same things! I mean, I occasionally got super invested in the occasional Blue's Clues but this is much better. It probably helps that I have always had the sense of humor of a 12-year-old boy...so perhaps Noah at almost-14 will start elevating my tastes.

Today is Friday the 13th so he wants to watch an old Jason movie tonight, though. He's going to dress up as Michael Myers for Halloween. He's really into Alien and is annoyed that I won't re-watch Jaws with him. His knowledge of classic 70s/80s horror is approaching George Washington on the Titanic levels.

Here he is gently coaxing a family of toads with their toad-babies out of the road last night. 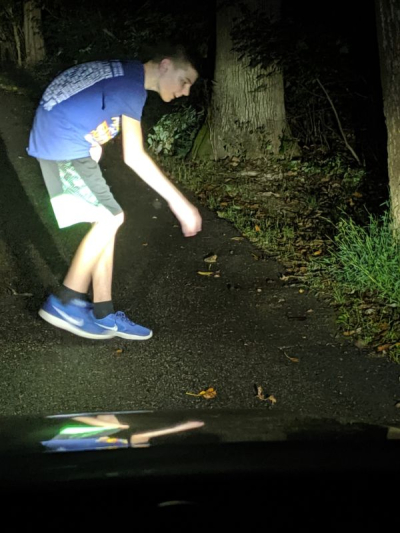 He made us stop the car until he made sure every last one was safely in the grass.

*I know my fellow ASD parents feel this. And feel this hard. It's pretty squee-worthy but just don't let the teenager hear you.

I have 2 teenage daughters - now 17 and 15 - and I agree, it's a lot of fun, and not nearly as terrifying/awful/traumatic as a lot of people make it out to be. I know it CAN be, and I feel lucky I guess that my two are (mostly) reasonable people. But I feel strongly that parents of younger kids should also know that the teenage years aren't always a nightmare!

We call toads/frogs "blorpys". I think that started when the same toad came to our front porch every night one summer and I named him Mr. Blorpy! They come in sizes from "wee blorpy" to "Giganto Blorpy" and I love them all!!!

I agree on the teenager thing... at least for now. My daughter was born right after Noah was (you saved me the whole 2 months I was on bed rest, reading about your own adventure in having your first kiddo!), and I feel like they've kind of grown up together. I love watching your boys grow up and develop as "real" human beings! :) I'm especially proud for Noah fighting the good fight and having such a wonderful heart (they all do, but you know what I mean). ;)

My girls are currently three and one and I just really need at least one of them to become far too invested in Harry Potter when they get older. If they could both be huge Star Wars nerds, so much the better. Also really pulling for at least one rainy/snow day Anne of Green Gables movie marathon. I did name my older one Josephine ostensibly after my grandmother but actually after Jo March, so she'll probably rebel by hating books altogether.

Thank you for that Twitter link. Oh my goodness, I found my people and some great recommendations. I swear I can only watch British TV since the election!

We actually caught Jaws yesterday on A&E! I remember waiting in a line that stretched around the block when it first came out. (Yes, I'm old!) But I still jump at the same spots. I've never seen any of the other movies. Just not my jam!
I found a toad on my front doorstep the other day. I gently nudged him (her?) back into the flower bed.

Obvi, you’ve let him watch the original “Poltergeist,” yes? Please confirm. And all the “Stranger Things?” And “E.T.,” surely! (Don’t call me Shirley.)

As a mother to 1.5 children (one almost 3yo and one on the way) - thank you SO MUCH for the reassurance that the teenage years might not be as terrible as everyone makes them seem. I'm starting to become a touch terrified of having two children - two young children - and keep trying to reassure myself that we're having a second one now so that later in life, we'll have the family we want. (Does that make sense??? Like, parenting is so hard right now and I certainly don't want to make life a big bag of suck now, but when my 3yo is suddenly 14, I'd like him to have a sibling who is not an infant....)

Anyway, I had been able to reassure myself except for I suddenly seem to be a magnet for all those WORST CASE SCENARIO teenager stories. Like when you're pregnant with your first kiddo and everyone suddenly feels the need to tell you about their friend's cousin's nephew's babysitter who was in labor for 96 hours and needed forceps and the vacuum and nearly died and then the baby failed to thrive. Except that this time I just keep hearing about the teenager who's been hospitalized or is flirting with jail or who is pregnant at 15 and I'm just like IT GETS BETTER RIGHT???????

Way to go, Noah! I have an atypical kid, more mental health related. And the other day, he was out, just being a kid with his buddies riding bikes. I nearly cried. The simple happiness of childhood is usually so difficult for him.

I have a pre-teen (6th grade) but every year has gotten a little more fun. We watch "Queer Eye" and "Grace and Frankie" together. She has SO MANY thoughts and ideas! She wants to be a lawyer! She thinks she might be bi! She is SO curious about when is her period going to come? What will it be like? How long will it last?

She is so much more comfortable with herself than I was at her age, and the world feels so much more complex. (even though it probably isn't, the 80s were no bed of roses in a lot of ways.)