Not going to lie, one of my primary reasons for having so many children was to have more people to bake (highly amateurish) birthday cakes for. And after many years of fielding many varied requests, all three boys have more or less settled on their birthday cake of choice. Noah always asks for a Victoria sponge sandwich cake. Ike wants the same one-bowl chocolate cake recipe I've been baking him since preschool, which eventually landed on this specific variation with grapeseed oil. (I dump the wet ingredients into a large measuring cup so it's still technically a one-bowl recipe because fuck washing bowls.) Although every year he does change up the shape, frosting and decorating details, just to keep me on my toes.

(I swear one of these years he's going to request an three-tiered octagon cake with dark chocolate frosting that is also blue, somehow, and yellow candles that turn into tiny rockets that spell HAPPY BIRTHDAY, IKE! in edible red smoke and also the whole cake doubles as a party pinata full of candy and money.)

(And I'll be like, okay, I'll see what I can do, but are you sure I can't interest you in a giant bleeding armadillo groom's cake instead?)

Ezra, on the other hand, always wants a cheesecake with a carrot cake on top. He couldn't decide which one he liked better one year, asked for both, and the resulting Frankencake turned out to be (SURPRISE) absolutely delicious. So now it's a Thing. 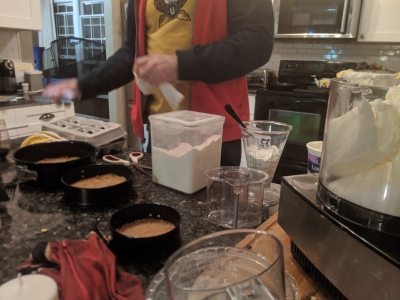 Jason makes the cheesecake layer (using some Martha Stewart witchcraft that involves a slow cooker, of all things), and I handle the carrot cake layer and cream cheese frosting. And because this is a patented Storch Family UndertakingTM, the process wouldn't be complete without a little fire, panic, and destruction of personal property. 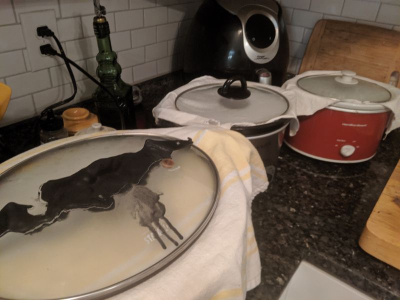 Jason left one of the slow cooker lids on the stove. I turned on the wrong burner when I went to boil some water for tea. So now our slow cooker lid handle resembles either a melted pterodactyl or the logo for yet another Dark & Gritty Batman reboot: 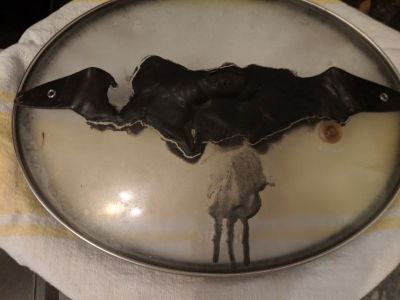 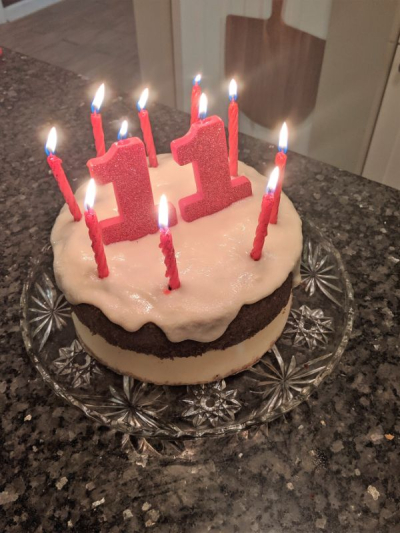 The cake turned out great, though. 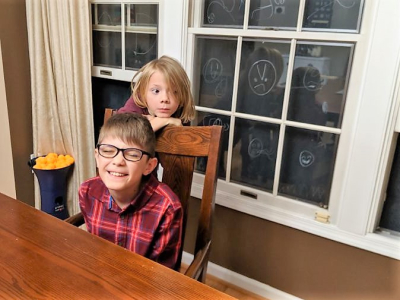 (Eagerly awaiting the great Frankencake and candle unveiling. And yeah, someone got "window markers" for their birthday, obviously.)

(Ike. Ike got window markers for his birthday. In June.) 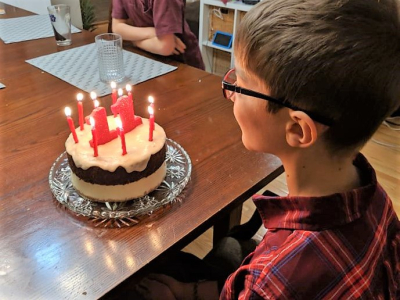 Ta-da! Our creation! It's alive! And on fire! Mwa ha haaaaa. 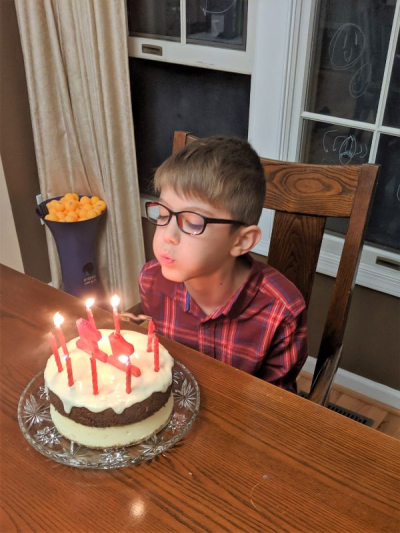 And then we all ate it. It was very, very good. See ya next October, Frankencake!

Wow, total pterodactyl. Even the grommet of the lid makes the eye. (Happy Birthday, Ezra!)

Happy birthday to Ezra, that is a genius cake creation he came up with there! (and you guys executed perfectly!)

If that's a Crockpot crockpot they will send you a new lid for free! It's amazing!! One time my mom's crockpot lid broke - they did not have the crockpot lid in stock, so they sent her a WHOLE NEW CROCKPOT.

Mmmmmmm Frankencake. Want. If that isn't a good excuse to get a year older, I don't know what is.

A very, very happy birthday to the Zah! (Cake does look really delicious. Essentially the cheesecake is like advanced cream cheese frosting;))

I'm so glad I'm not alone. I put the lid to my instant pot on the stove not knowing that a child had left the burner on. Melted the whole damn edge. Spoiler: It costs nearly as much to replace an instant pot lid as it does to buy a new one. *facepalm*

@Christin So two out of those three slow cookers are actual Crock Pots. The third one is Hamilton Beech Guess which one I melted.

While unpacking a couple of months ago (from our move last year August) I found the window crayons. The kids had a fun 5 minutes drawing on the back sliding door and then I took them away. The "art" is still there. I'll wash it off some day. Maybe before Christmas.

Annndddddd, now I’m craving Cheese Balls because of the big Cheese Ball holder in the corner of your dining room.

The idea of a cheese cake with carrot cake top sounds ridiculous. BUT those photos are doing it for me, and now I have to find an excuse to make it. I wonder if the 5 year old will be OK with a carrot cheese cake rather than his usual rainbow cake with paw patrol icing?

I’d be jealous af of all the cake if I weren’t eating a slice of superb pound cake from my friend’s rehearsal dinner last night for breakfast. I love how creative you guys are. You nurture that in your kids and it shows. And it leads to some really fun, wonderful stuff. :)

My grandma once set a paper grocery bag on top of our 1950's push-button control stove. She didn't realize that she turned a burner on when she set the bag there. Of course the bag caught on fire. Luckily, my dad put it out quickly, and no real damage occurred. This happened more than 35 years ago, and it scarred me so much that I am obsessive about not ever putting anything on the stove that isn't a pot or pan. I even have a hard time setting an all-metal pot lid on top of the stove. (Except for that one time a few years ago that I set a plastic Tupperware lid on my stove--for like, a minute-- and it melted. I momentarily forgot that the burners got pretty hot, even if they were off, when the oven was on.)
Glad the crockpot lid was the only casualty. Your cake/cheesecake mashup sounds utterly delicious!

Congrats, you gave me my first belly laugh of the day in regards to Ike's future Octagon cake. What a hot silly mess. My daughter (also the middle child) is a big fan of cheesecake all the things but recently also brownies. I may need to make a brownie frankencheesecake for her big 11th in January. WISH ME LUCK.