I didn't want to jinx anything, but early last week I got the news that someone submitted an adoption application for Jake. His very first one, 10 full months since he came to live here, and a mind-boggling TWENTY-SEVEN months since he was found as a stray in Georgia. That's a really long wait, and I kept trying to temper my CAPS-LOCK-level excitement with the knowledge that not every application results in an adoption, that this might not be the right home or fit or blah blah blah.

I drove him 45 minutes in the pouring rain to meet the potential adopter and an adoption coordinator at her home yesterday. The rain stopped the very second I pulled into her driveway and got a glimpse of a huuuuuuge fenced-in backyard, and what looked like a hiking trail running beside it. Oh, damn. Nice.

The adopter had to put her (very senior) male pit bull down a few weeks ago, and was hoping to adopt a (senior but not THAT senior) male dog as a companion for her six-year-old female pittie. She'd already had two other meet-and-greets over the weekend and neither had been a good fit. (She also has two rescue birds and a rescue rabbit, so she knew it was a tall order to find a dog that could be chill with everybody, but still. She was feeling pretty discouraged.) Her one reservation about Jake was that he looked a LOT like her late boy -- black with white tuxedo markings, and the same salt-and-pepper snoot -- and she worried looking at him would make her sad.

Instead, she never stopped smiling.

Her dog -- who looks a LOT like Poppy, and is even named Penny, like wat -- kept excitedly running by Jake for drive-by kisses, and we had them running around off-leash together within a few minutes. We took him inside where he behaved very politely, cocked his head at the birds, and wagged his tail at the rabbit. But all he was really interested in was HER, an he kept going for his patented move of Sticking His Big Ol' Head Between Your Knees And Leaning Into You Until You Give Him All Your Headpats And Also Your Heart.

And that was that. Jake found his perfect home, for forever.

I came home and told the boys the news, and they all reacted with some variation of cheers and yay! and then also oh noooo. Ezra threw his arms around Jake's neck and sort of yelped out, "I'm just so...happy-sad!"

And I'm dying a little inside, knowing that in just a few days I will walk down the stairs in the morning morning and not be greeted by Jake putting his mismatched stocking-paws on the bottom step while happily wagging his entire lower body, or get to listen to his funny little grunt-snorts of excitement whenever Jason and I talk to him in the Doggo Jake Voice we invented just for him.

And of course, I'm dying even more knowing that I can't explain to Jake that this was always the plan, that this was always supposed to be temporary, that our job was to get him off the euthanasia list and get him healthy and socialized and then find him a home with a big backyard and a little sister to play with and birds and a rabbit to stare at and a human who can't wait to spoil him rotten and talk to him in her own special Doggo Jake Voice. 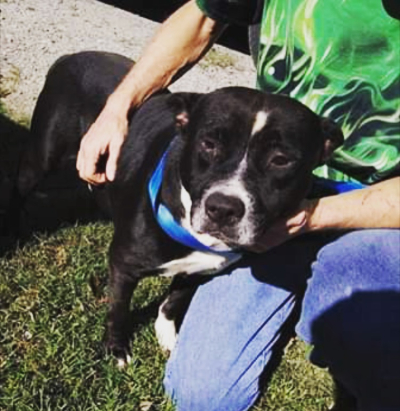 Jake at the shelter, December 2018, photographed here as a final plea for a rescue to take him. 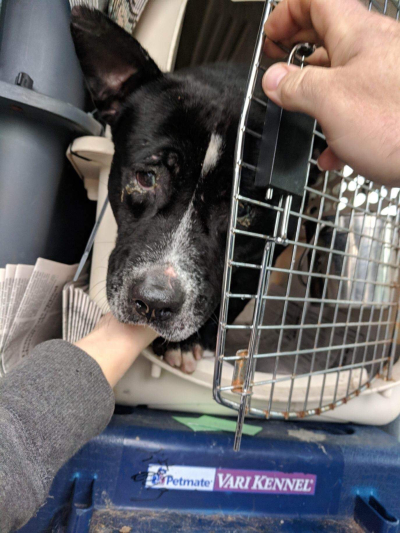 Jake being boarded for transport to Baltimore a few days later. 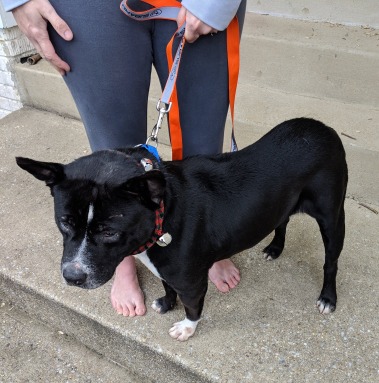 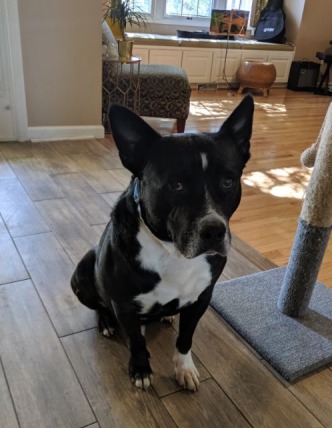 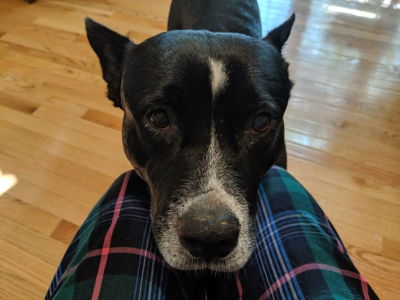 And now we get to do the right thing all over again.

P.P.S. Now that I've played all your heartstrings for SUCKERS, can I mention that Jake & Tormund's rescue is in desperate need of food donations right now? Can anyone spot them a bag or two? We often end up feeding our fosters out of our own pocket so as to not deplete the food stash for needier cases...and right now they have a lot of puppies and not a lot of puppy food. Do you hate puppies or something? I didn't think so.

Weeeeeppppinnng with Joy! What good people you Storches are! So happy for Jake and his new family.

Having fostered many and foster failed a few, I can totally related to happy-sad. Good for Jake for finding his perfect love and good for you and your family for being the safe place between there and here. I'm in happy tears.

He looks like such a different dog from when this all began 27 months ago when he was found. Truly, he was blessed to be with your family and I'm sure he brought you guys all so much love and happiness. I was secretly hoping you'd foster fail and keep the cute bugger but I'm also really glad to hear that his new momma sounds likes a dream. I hope he thrives. :) I know if he could speak, he'd tell you a thousand times over thank you for giving me such a wonderful life and bridging that gap.

Um... that link takes me to Corelle dishes?

Yay for Jake!
We are a three-time foster fail, so I give you all the props for being strong and letting him go to his forever family. You are doing an amazing thing!

So good of you all to keep him for 10 months! We fostered a mom and puppy for 2 months and it broke my heart to have them adopted, but it was the right thing to do.

Do you have an address for the rescue? Their Amazon wish list doesn't have any shipping info. Thank you!

So happy for Jake! So happy that you were not a Foster Fail and now you are fostering kittehs!

I'm happy sad too! I applaud you for being able to have the strength and grace to know this IS the goal, and still have the compassion and love to get your heart broken a little bit so Jake gets an awesome furever home. Thank you!!!!

So glad to hear about Jake! I went to pay for my amazon order for the shelter and now it wants to send it to me. There is a 'Sammie Jo's Gift Registry Address.' Is that who I send it to? Thanks!!

What are "pinch collars", please?

We are adopting our very own rescue puppy on Friday!!! So happy, and a little sad for her foster family who got into fostering because they "can't afford a dog." Sniff, sniff. Unfair! but also great that they have opened their home to 3 dogs that need homes and have found their forever families.

Also, Amy, do you have tips for a smooth transition between foster family and new home? We have stocked up on treats and toys. Also a snuggly bed and a snuggly 11 year old who cannot wait to welcome this 5 month old puppy.

Oh, this October has been an emotional wreck for me. I’m so happy/sad for y’all. Yay for jake and forever homes!!

oh this made me cry, but I'm so happy for Jake (and yet still crying)

As both someone who volunteers in dog rescue and a human person who has personally adopted 4 special dogs, THANK YOU. Foster homes are true, honest-to-God heroes in my eyes. Rescue groups cannot operate if they don't have available foster homes willing to take in animals. Jake was so lucky to have your family's help and it sounds like he found his perfect forever home. It can't be easy to love and then hand them to someone else, but you are saving SO MANY lives - not just his. Good job!!