So we've been going to the Maryland Renaissance Festival a lot lately. I guess our multiple season passes to multiple musical theater seasons weren't dorky enough, and the bins (ALSO MULTIPLE) of costumes (EVEN MORE MULTIPLE) required didn't compete with the space currently occupied by all of Jason's ping pong accessories or the industrial-grade meat slicer that he bought because he made bacon one time.

There is apparently a not-very-large leap between attending a Renaissance Festival for the first time and thinking I do not get this, I do not get any of this at all and becoming a person who is like, SUPER INTO IT, maybe a little TOO INTO IT. And that leap appears to be somewhere around the purchase of 1) your second beer and 2) a flower crown. After that, you might as well go all in. 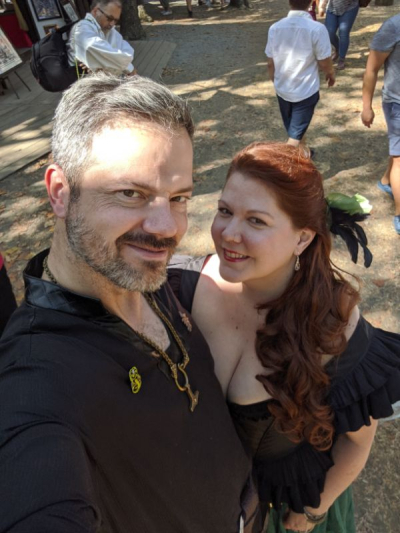 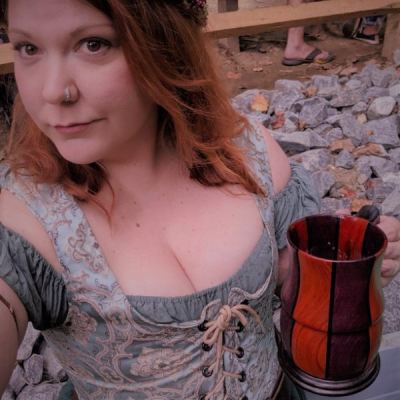 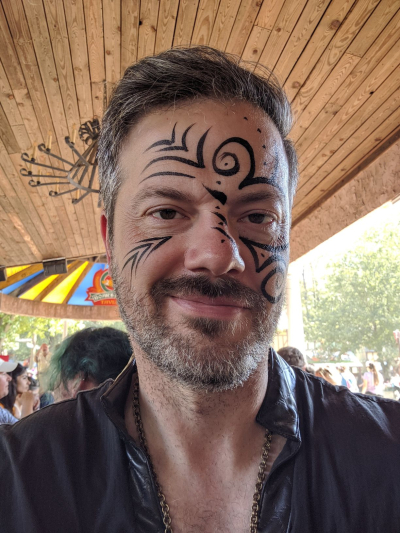 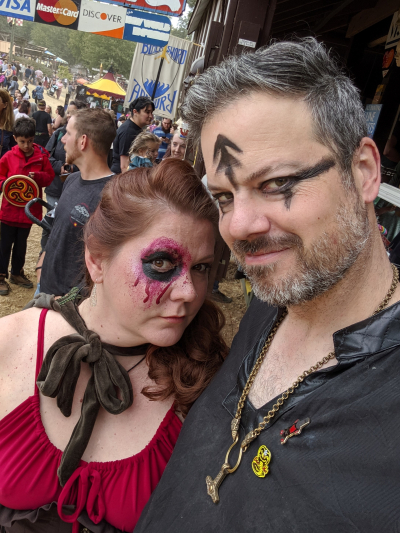 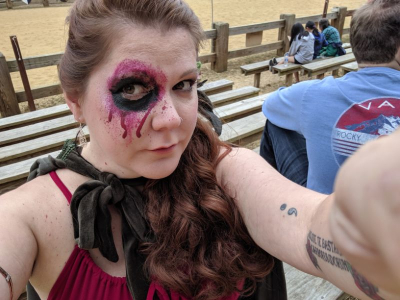 (I keep getting a ton of hair compliments on IG/FB and I keep yelling that no, I do not deserve those compliments as the "hair" is a ridiculous clip-in extension that I got on Amazon for $9.99. My hair stops around my shoulders; everything past that is a lie.)

(The clip-in color does admittedly match my actual hair color really nicely; but we all know that I'm not a natural redhead either so chalk that up to more Amazon-provided fakery.)

(THE BOOBS ARE REAL THOUGH. THANK YOU, MEDICATION WEIGHT GAIN FOR SETTLING SO DIRECTLY INTO MY BRA.)

So that's been our weekends lately, in between piano, flute and saxophone lessons (plus all the assorted auditions and concerts and recitals), Jason's weird ping-pong league thing, Ike's Elf the Musical Jr. drama thing, Jake's adoption events, and a whole slew of things we bought tickets for like, six months ago, back when the concepts of months like "October" and "November" seemed hypothetical and very far away. And now they are here and it's...kind of a lot.

(Rachel Bloom, Randy Rainbow, Michael Ian Black, Bentzen Ball, a five-game pass to see the Washington Capitals, and that's all before the aforementioned seasons of Musical Theah-tah kick off. Plus our Friendsgiving and the daily act of keeping so many multiple creatures alive and fed. I'm exhausted already.)

And who knows, maybe Jason will make some bacon and finally use that meat slicer again.

(Spoiler alert: He will not.)

OMG, Amalah, you are going to loooove Randy Rainbow!

Flybigd, I think it's the person BEHIND the camera that instigated that sultry expression...

I grew up going to the Sterling Renaissance Faire in New York. When I moved back to NY state five years ago I kept thinking about going but could never mentally prepare myself for the major campaigning I would have to do to get my husband on board and rationalized my wimpiness telling myself that the kids were too young that I didn't want to deal with a stroller in the shire. Fast forward to this year and my proclamation that it was the year of experiences, not stuff. I voluntold my family that we were going. With one husband and two kids grumpily loaded into the car and we made the drive. Sure - maybe it was the quite respectable selection of craft beers at the event and ability to pick out their own swords, but they ALL loved it and on the way home declared that we should go every year. #winning PS LOVE your mug - we bought pewter ones, you know, to bring in future years :D

AND his magical something-or-other bbq pit thingie that requires pellets not wood chips or vice versa or do I have the wrong blogger here?

Dude. Those boooobsss!!! Why does my medication weight gain go straight to my stomach, so that I look 5 months preggers all the time? Life just is not fair.

Two summers ago, we went to the same fest in everyday clothes plus one flower crown. This summer was full garb. I predict next summer will be multiple days with different outfits. I'm intensely jealous of your wooden mug - I covet every thing in that shop every time we go. Also, you look amazing.

My sister started going to the NY Faire when her kids were small. Her kids are now 31 and 28 and my sister LIVES at the Faire during the season and is a full-time Viking re-enactor! Be warned!

Omg. I’m in a wedding next weekend and I think I need that extension thing.

And Jason’s meat slicer reminds me of the Seinfeld where Kramer had the meat slicer!