So Jake left us for his new home on Friday, which: SAD, but also I'm still pulling clumps of his fur out of the robot vacuum so it's like he hasn't really left! Good god, did that dog shed. I could knit us three new foster dogs with what I lint-rollered off the couch this morning.

This weekend I painted our dining room, after four full years of bitching about it. (Turns out one person's deep and abiding love for "rich deep chocolate browns" is another person's "oh my god why is everything in this house the color of poop?") Okay, it was more like painting one and a half  walls vs. a full room, BUT STILL. You know how we do here.

YEAR ONE: I don't like that dark brown in the dining room. I am going to complain about it on a near-daily basis.

YEAR FOUR: HAPPY SATURDAY MORNING I JUST SENT OUT SAVE THE DATES FOR FRIENDSGIVING AND I REFUSE TO HAVE ANOTHER FRIENDSGIVING IN A POOP BROWN DINING ROOM I MEAN IT PUT YOUR PANTS ON, WE'RE GOING TO THE PAINT STORE MOTHERFUCKERS. 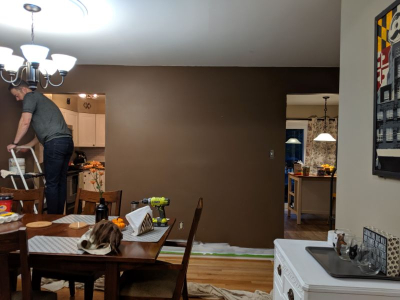 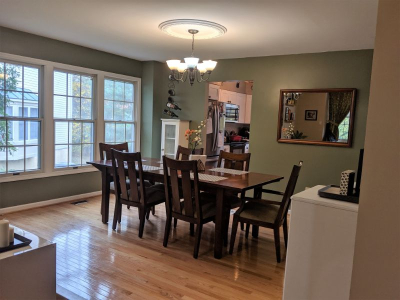 (I threw out the dining room curtains, which I also did not like, in hopes of inspiring a similar burst of long-delayed decision-making [different curtains? blinds? honeycomb? bamboo? shutters?] but so far we're just going with NO ONE WALK THROUGH THE DINING ROOM NAKED OKAY.)

Friendsgiving -- while very fun and a nice opportunity for us to invite people we know from a dozen different contexts so they can all be like, uhhhh so you know the Storches from...work? Neighborhood? Old neighborhood? Ping pong? You one of Amy's weird Internet people? -- is primarily something we do every year to light a fire under our asses and GeT sHiT dOnE. Carpets get ripped up. Walls get painted. Closets get purged. Weeds get pulled. I buy mums and fucking decorative gourds and just yesterday we finally put the Christmas decorations away.

Also in the basement: 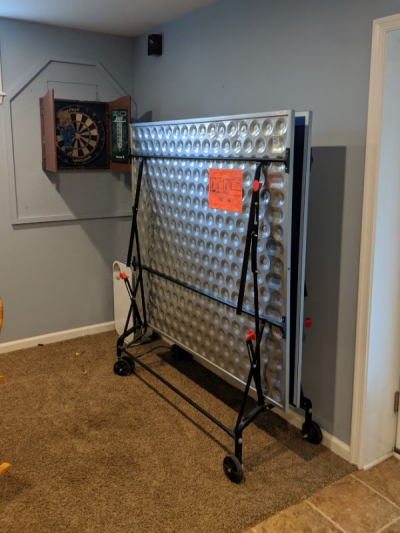 That is a proper, full-sized ping pong table. Jason bought it on Craigslist with the idea that we'd set it up outside on the back patio for Friendsgiving (because it actually does not fit inside, unless we were to purge almost all of the furniture).

"You know it usually rains or is super-cold by that weekend in November, right?" I asked him.

He ignored me, so MARK MY WORDS, we're going spend Thanksgiving watching TV and eating leftovers from atop that damn ping pong table. But I  guess there won't be any room for us to then leave the Christmas decorations out in January?

(And yeah, that's the desiccated husk of a Trump dog toy impaled on the dart board. Don't ask. I didn't do it. I told the perpetrators that it seemed like a good way to get investigated by the Secret Service, but was informed that only happens if someone reports you, Mom.)

I've had good luck with www.selectblinds.com and we are entering the season of great discount...

We are going through this right now, too, my in-laws are coming to stay with us for a week at Thanksgiving. Paint! New furniture that isn’t crappy! Everything else I’ve been putting off for years!

We host a New Year's Day party so we spend all of December frantically getting the house company-ready. It's so much fun but why, why, why do we do this to ourselves?

Bonus for this year's party is that we are in the middle of a giant DIY project (we're switching the kitchen and the bedroom) and our furnace just died for good so it's looking like we won't actually have a kitchen by then. Good thing it's a potluck! (And good thing we live in a multifamily with my mother upstairs, so I have access to a kitchen).

I thought you were going to pay homage to Charlie Brown Thanksgiving by eating jellybeans and popcorn around the ping pong table.

Shiplap!!! LOL I love the color. What is it?

Wait...how does *THIS* one of Amy's weird Internet people get invited to Friendsgiving 2019 at the Storch household?? I promise to (1) not be too too weird, (b) compliment your new wall color and the food and all the pets, but not in a weird way, (fourthly) play ping pong!, but not weird like Monica in Barbados, and (lastly) not be a republican, as that would be weird. Send invite post haste!

Baby number 2 is due in seven weeks. She's going into a room that is painted fire engine red. I have complained about that red room since the day we bought this house (six full years ago). Now I truly have a deadline to paint it.

The room is still not painted. I should probably get on that.

My dining room is exactly that color.