Look What You (IKE) Made Me Do

So I still haven't really figured out how to keep this blog from becoming little more than a repository for Shit I Already Done Posted On Facebook & Instagram, but a certain recent development feels like it merits a mention: Every time I think this house can't get any zooier we go and add yet another damn mammal. This one is Ike's fault, because how could we possible argue with this face and logic?

Dammit, he got us. I sent the video to Jake's rescue and within an hour or two they sent me this photo: 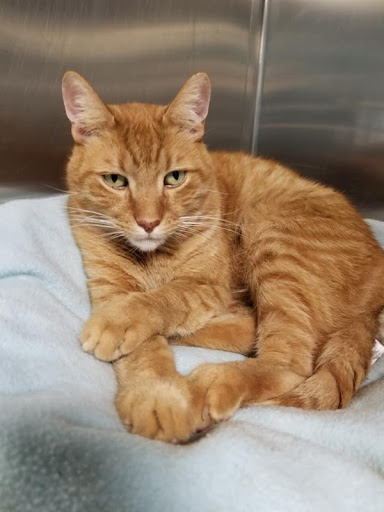 A couple months ago, his owner brought him to an animal hospital in Baltimore and asked them to euthanize him. He wasn't sick, or old, or a behavior problem -- she just didn't want him anymore and felt that putting him down would be the best way to be "done" with him.

The vet refused. So she left without him. He'd been living there ever since.

The hospital staff all loved him, but unfortunately the clock was ticking down on their ability to keep him much longer. They were desperately trying to find him a rescue before turning him over to the city's Animal Control. 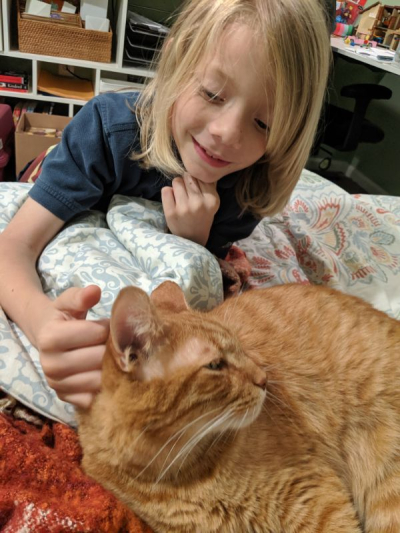 The Great and Mighty Ike, Saver of Lives and Giver of Pets.

His nickname at the hospital was Sour Patch, due to his habit of coming over for pats and snuggles and belly rubs...and then randomly pretending to bite you. He doesn't actually bite down (unless you're being a dick and keep petting/prodding/poking him after he's made it clear he's done with you, hooman)...he just kinda puts his teeth on you for a second. Then a minute or two later he  head-bumps your hand again, like, okay, I'm not grumpy anymore, plz continue.

Nobody here was a fan of the name Sour Patch, though, and coming up with a name was a long, drawn-out process that very nearly tore this family apart. Everybody had their own ideas; nobody liked anybody else's ideas; names were briefly chosen and then discarded 10 minutes later because someone decided it didn't really suit him after all.

(For the record I was overruled on my top choices too, which were Peach [as in Hi, I'm Peach Ment the Cat!] and various generic cat names like Pumpkin or Muffin translated into Ukrainian. NOBODY APPRECIATES MY TOPICAL HUMOR.)

Eventually, we settled on Tormund. The kids didn't really get it, but by that point I think they were just sick of arguing about it. We assured them it was a Very Good Cool Name and that it suited him just fine. 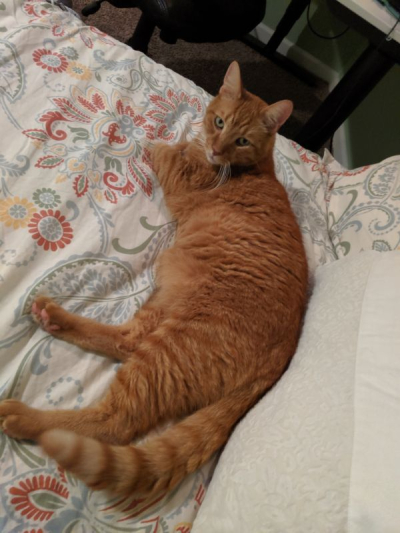 He is definitely a bit of a chonk boi. He's the same size as Beau. And Rey's like...

But after all that, he still mostly gets called "Basement Cat," because we've yet to full integrate him among the Upstairs Pets. He seems cool with everybody, but they're all still very OMG WTF BARK HISS BBQ! about him so we're going very, very slow and gradual with the introductions. Once that's done and we have a solid sense of what kind of household he'll do best in, he'll be officially available for adoption.

(He's about six years old, neutered, fully vetted, and perfectly healthy. But sure, why not just kill him! Great plan, Cat Owner of the Freaking Year. )

Oh, and Ike will be JUST FINE if you adopt his orange cat, because he's already decided we're going to foster a white one next. (BY THE WAY, yes, Jake is STILL here, STILL with us, and STILL waiting for a home! And guess what! He's not even as old as we originally thought! The shelter in Georgia estimated his age at 10, but after a full-body x-ray to confirm he was heartworm free, his vet up here was like, there is no way this is a 10-year-old dog. The grey muzzle is from stress, his teeth are worn from likely chewing on a chain or cage [we've always suspected he was kept almost exclusively outdoors] rather than age, and his fatigue/slowness were from the heartworms, not arthritis. He's more like 8, and now that he's healthy getting proper food and care, he's your typical playful wiggly goofball of a dog with LOTS of life left to live. Obviously I'm going to sob my face off when he's adopted, but we really do want to save another of the many, many dogs like Jake out there. We take him to a lot of local adoption events on the weekends, so if you know of anyone who might possibly like to meet him...) 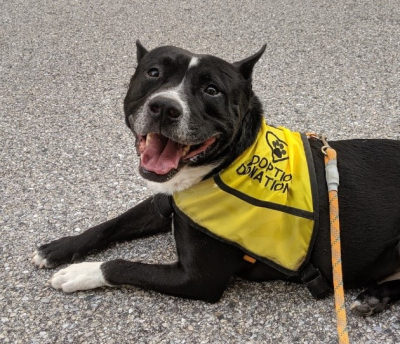 (To meet him is to lovvvvvve him, though. We once watched a grown man cry because his wife said they couldn't consider adopting him because they already had three dogs and needed a bigger house first. I was like, DAMMIT GO BUY ONE THEN.)

One of my dogs has a similar story - she had mange and her owner took her to the vet to be euthanized. The vet refused because of course her condition was easily treatable, and the owner left her there. She ended up in a rescue and I got her a few months later. She's the best and I can't imagine anyone wanting to get rid of her but it worked out well for both of us! Thanks for being a piece of shit, former owner!

Oh Ike!!! Such an adorable little munchkin. I love his logic and I applaud you being a foster family! I'd love to do it but I KNOW I could not handle the goodbyes (no matter how wonderful the forever home)! You will soon discover BIG FLUFFY BOY KITTEEZ ARE THE BOMB!!! Our Maine Coon, Taggart, is the biggest chonk boi lovebug on the planet. :)

I have so many comments!
1) He is a VERY handsome boi. I hope Tormund finds a good home when he's ready <3
2) Ike is officially my favorite kid for wanting to FOSTER every kitty. Eh, it's fine, I want a white one next.
3) I wish there was a blacklist for terrible pet owners. Attempted *deleted expletives that may have been mildly violent*
4) Hi Jake!

Wait til Ike learns you can foster entire litters of kittens. 😂

My parents adopted a Bassett hound that was terribly abused. His fur was stained from having to live in dirt and literal crap. Washing wouldn’t clean it—only it growing out would. He cowered whenever my dad would come near him because he was hit so much and he would practically swallow his food whole. A couple of years later, he loves my dad, eats his food whenever he wants to, and cuddles with his favorite cat on one of his many dog beds. Life is good! His biggest conflict seems to be what couch to sleep on or what crime drama my mom will leave on for him that day. ;) And we often wonder how anyone could hurt such a sweet, sweet dog. And we wonder how the dog could still be so sweet after being treated so badly.

Please don't stop writing blog posts...I would be very sad! I don't care if they repeat stuff from social media, I'll read whatever you write anyway :)

I am really sad I do not live close enough to visit Jake because I'm pretty sure he would be coming home with me.

You are wonderful adult humans, modeling kindness and compassion in your little humans. I'm sure glad you're still here ❤🐶🐈 I can't wait to see the baby goats....

You my cyber friend are doing this right!! I don't have the house to adopt a pet now, but when I do, I will.

Top of my name list for this one is "Crush"

I could never foster because I would become the Crazy Cat AND Dog Lady!

I love the new boi! I fostered 8 wee kittens last fall (all one litter!) and it was amazing. I also cried and cried when they went to their new homes.

Ike's eyes! OMG. He needs to play Oliver, and Charlie Bucket, and many other fabulous starring roles. He's born to it.

I so loved this post. Ike is a rock star.

Orange tabbies are just the best. Our Stewie (inspired by Family Guy) was the most ornery young cat and would get way too rough when playing so it was good he was young way before we had kids. Now he's 14, sleeps 23.5 hours a day, and is soooo snuggly and chill except at the vet where he's no longer allowed to visit without tranquilizers. ;)

That's wonderful! We have a zoo as well (2 dogs, 2 cats, and a rabbit). I couldn't foster because I know I'd just keep them! I love that Ike is able to let them go.

do you think jake might find his way up to massachusetts if a family really wanted to know and love him?

The entire post is lovely, but I just want you to know I appreciate your topical naming attempts! :)