The Kids Are Alright. Weird, But Alright. 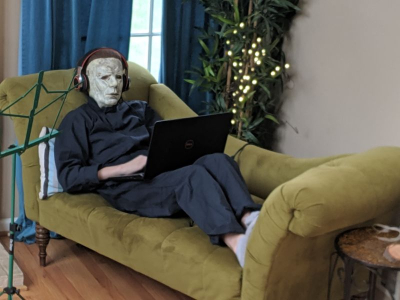 Ah yes, very normal and not at all creepy. His friend is coming over for trick-or-treating and scary-movie watching later, dressed as our dear friend Pennywise.

(The cardboard cutout has spent October looking ominously out the front window of Noah's room, much to the dismay of several Postmates and DoorDashers.) 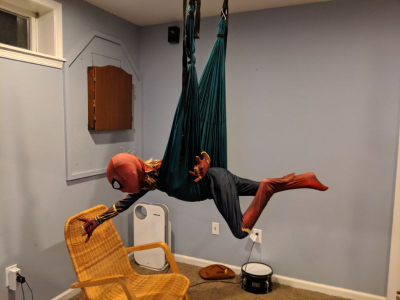 He asked me to Photoshop out the swing and turn the chair into a building. I did neither of those things because I do not know how.

I don't (yet) have a photo of Ezra's costume, which he made himself and kept shrouded in secrecy. He asked for an Amazon box, aluminum foil and duct tape at one point. Also hair gel and sunglasses. Oh, and all the straps from our luggage. He's either going as some kind of DJ or plans to ship himself out of the country with a new identity. Stay tuned!

I admit I was a little concerned about his homemade costume -- that other kids might not get what he's going for or make fun of him for not having a "real" costume -- and found myself halfway through a sentence trying to sell him on a store-bought Spiderman costume. (A different Spiderman than Ike's Spiderman. It's Spiderman Too: 2 Many Spidermans!) Then I stopped myself, because Jesus Christ, nice message, Amy. Forget I said that, kiddo. Here's some glue and an extra Amazon box. Go be your weird self!

I had a similar moment with Ike recently -- he's been getting teased about his hair at school, with one kid in particular giving him a very not-nice transphobic nickname. The teachers know who the culprit is and are dealing with it, and despite my indignant RAGE over the situation, I felt like I had to at least make the suggestion? That he could maybe? Just get a haircut? For now? ("I CAN'T FIX AMERICA, KIMMY.")

Ike gave me the witheringest of withering looks and shook his head no. "THIS. Is how I like to look," he said. "Why should I change how I look because THEY don't know any better?"

(EZRA YEAH! Boys can have long hair! Have they never heard of THOR? Or seen a single rock star EVER? Honestly.)

(NOAH: Do you need me to go scare them with my Michael Myers costume? Cuz I totally will.)

(Some days -- not all the days, or even most of the days -- but some days, I think I'm doing pretty okay at this.)

Gawd I love your kids. CLEARLY you all have shaped some amazing humans

My boy child has A LOT of hair. And he's never reported teasing about it, but is occasionally misgendered. And I'm like, "if it bothers you, we can get a haircut" Nope, I'm good.

All your babies are the shit, much like their mom and dad:)

This is so wonderful:).

Loving the lounging Michael and flying spiderman. Can't wait to see the secret costume. It will be the best.

I love that Ike is sticking to his guns on his hair. My 15-year-old has lots of wavy hair and it is long. So, tell him to keep rocking it. If I could post a pic of this child's hair I would because I'm jealous of it.

I tell my daughter that being weird is the ONLY way to get through life, and to fear the people who say they are normal!

Love me some Storch Boyz!!!

I also have a boy with very long, very curly hair... same as another commenter write, he often gets misgendered but is not bothered. I think a lot of adults compliment it, so that outweighs any negative other comments.
Some people, though... they just HAVE to have an opinion about boys having short hair. Sigh.

Ike and his brothers are badass :) Good job, mama!

You all rock!!
I just sent you an email with your Superman flying through New York city ;)

I love long hair on boys and cried when I had to cut my 3 year olds hair short last year (every time he was in bed he was twisting huge knots into it that would take gobs of detangler and upwards of 30 min to comb out). Thankfully my 10 year old son has long hair (like more than half way down his back). He had one kid tease him about it in 1st grade and the teachers shut that down hard. He does frequently get midgendered but he just corrects people "I'm a *boy* with long hair". I've tried to tell him he doesn't have to correct every random stranger who says something in passing but he's pretty dug in on it (probably related to his autism).

My 6 year old dressed as a "weirdo" in rainbow striped pants and shirt, teal checked socks, maroon converse hi tops, and a reversible rainbow sequin mask/shield. Next year he wants to be a cup of yogurt. Yay for weird children with original costume ideas!

I am three days behind because I've been on an art retreat.
I hope you post an update of what Ezra ended up doing with all of his "materials."
Good for Ike for being His True Self. I hope he can always do that and not be stifled by others misguided ideals for what boys "should and shouldn't" do or be.

Hahaha your kids are weird but amazing. I totally take his side for keeping longer hair. Why should he cut it if the others don't know any better ? Haha love the reply.

My kid was so proud of himself for coming up with a costume that didn't pose any sensory issues for him: Percy Jackson (hoodie, jeans, Camp Halfblood tshirt, sword and shield). It was ADULTS who complained that he "didn't have a costume" and bummed him out. STFU ADULTS.