A Square Lamp in a Round Hole

Many, many years ago, we went to West Elm for pillow shams and also left with a lamp for our dining room. (A wee Ezra was helpful enough to document the shopping trip at the time.) All lighting was 10% off, and then there was an extra 40% store-wide sale going on, and so we got this $399 chandelier (in discontinued grey), comprised of hundreds of (INDIVIDUALLY! WRAPPED! IN TISSUE PAPER! AND TAPE!) seashell bits and bobs for...definitely less than that.

This lamp was the only non-furniture thing in our old house that I insisted on bringing with us when we moved. This lamp was non-negotiable. This lamp was a Hill That I And Any Subsequent Real Estate Deal Would Die On, even against the most strenuous advice of our agent.

(The same agent who made alarmingly critical noises about the MAIL SLOT on our front door, and so I rushed out to buy SPECIAL POLISH for the mail slot. AND THEN, when the special mail slot polish failed to deliver the desired pop of curb appeal, I replaced the entire mail slot because YES, THIS NEW MAIL SLOT WILL SURELY SELL THIS HOUSE!!1 !OMG!!1CRYTIME!)

(This lamp was very important to me at the time, is my point.)

I stuck LAMP DOES NOT CONVEY Post-It notes on it before the open house and showings began, and it came up as a discussion point during some back and forth between our buyers. Were we sure we wanted to take it? Because they really liked it, and if we didn't feel like dealing with taking it down...

No. I was leaving behind much nicer appliances and a grill and a BRAND NEW MAIL SLOT; that goddamn lamp was goddamn coming with me.

Mah Preshus Lamp has a rectangular ceiling mount, like so: 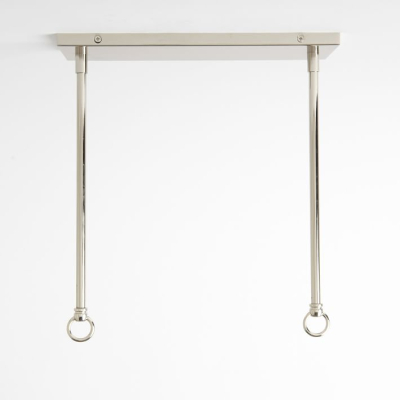 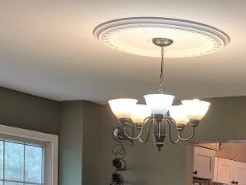 That's a big-ass McMansion-y injection molded foam ceiling medallion, both glued to AND screwed into the ceiling with anchors. The removal of which would clearly be A Whole Thing.

I never even noticed it until after we moved in, probably while clutching Mah Precious Lamp wrapped in one of my children's hospital receiving blankets, definitely while remembering what a complete and utter pain in the ass it was to take the lamp down at our old house and replace with whatever generic brass-n-glass fixture had been there originally.

The fancy lamp was quietly set aside in a basement closet. We spoke of it fondly from time to time.

But after finally getting off our asses to paint the dining room, Jason decided it was also high time to attack the Ceiling Mount o' Doom.

And that time was at EXACTLY 8:14 a.m. this past Saturday. 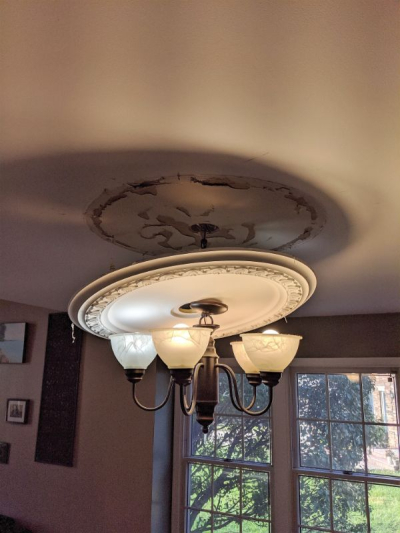 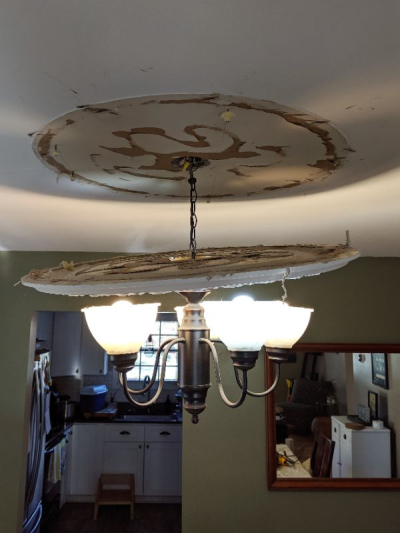 The noise and mess was tremendous, but in the end Jason claimed victory, and my fears of half of the actual ceiling coming down as well were unfounded. 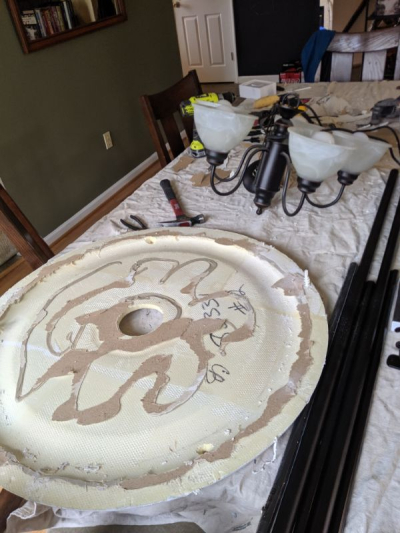 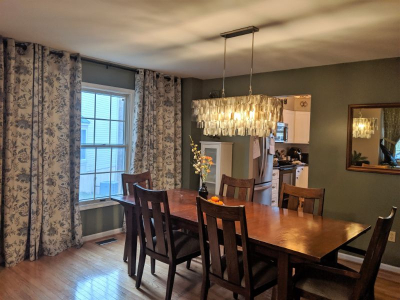 And now I have Mah Preshus Lamp! (And curtains!) (And for now, for today, for the next 10 minutes after taking this photo, I have a completely uncluttered dining room table.) It's just as warm and happy-making as I remember, and the kids enjoy playing with it like a wind chime. And it only took us four years!

(Also we're not moving ever again but I'm still gonna specify in my will that LAMP DOES NOT CONVEY.)

Posted at 10:52 AM in breathtaking dumbness, houseness | Permalink | Comments (20)

You are so ready for Friendsgiving. :)

This will be epic!

OMG. So I have the same light, but in the gold version. When we moved houses in 2015, it was the ONLY thing that I insisted would not be left with the house. It was one of the first things that we put into place in our new house. It is years old at this point but it still gets compliments. I would die before I would part ways with my golden capiz West Elm beauty. This post brought me such joy this morning. Thank you.

OMGGG I love that lamp! And I love it even more in your actual house than in the super bright lit pinterest-room from the West Elm site. Now I'm down a very expensive rabbit hole of dining room ceiling fixtures, so thanks for that.

It's GORGEOUS! Well worth the DOES NOT CONVEY save. :)

I have glared at my dining room light fixture every day for four years now not knowing what should replace it, but now I KNOW. There will be weekend coupon hunting following by ceiling spackling as I will make this lamp mine.

My husband is in the Navy and we talk so much about The Forever House and what it will and will not have and I am so jealous of people who get to just live in their house and not have to think when buying furniture about whether it might fit in the next four places. But someday! I too will never move again! And then I'll have nice light fixtures and furniture that doesn't get dented by movers every two years and my dining room won't be a toddler playroom anymore.

I think we're currently near your old 'hood ("North Bethesda" *cough* doesn't exist) and had the designer from my friend's real estate firm come through our townhouse recently to tell us what to do before we move. Our mail slot was one of the few things she didn't mention.

We took down our dining room light fixture before listing our last house because I wanted to keep it. Of course then one of the glass globes got broken at some point during the move in and out of storage in my in-laws garage (despite being wrapped in a blanket!). I held onto it and spent dozens of hours trying to get a replacement but after 3 years I finally admitted defeat and let it go.

That is absolutely a beautiful lamp and room, my how I wish I had your decorating skills.

I’ve been looking for curtains for the living room for ages! Yours are so pretty and available in my length! Thanks for the assist! And your fixture is really nice!

Quasi decorator that I am, the only thing I did not like about your past post on your newly painted dining room was the ceiling fixture. This current fixture is beautiful and complements the room so much better. Good job, you!

It looks so good! I remember when I first came across that lamp online, and fell down the rabbit hole of DIY dupes. And I don't even have a HOUSE.

That lamp looks fabulous. I also love the color of your dining room. I want to paint my master bedroom that color.

As I was reading, I was thinking...I can't imagine a lamp that would cause such a commotion...and then I got to the actual picture of the lamp! That is gorgeous! I don't blame you one bit for "does not convey"! I LOVE it! and it looks perfect in your dining room.

I read this post when it hit my feed reader and now I have gotten at least 5 West Elm ads on my phone with that light featured. It makes me laugh. Stop watching me internet!!

I bought a new house on a whim, and the dining room (and the room you enter from the front door) has that light fixture in a gold/bronze finish. 99% of the people who've seen the fixture, love it. The only person who "doesn't care for it" is boyfriend/life partner.

I like your light fixture, but can you tell me where you got your dining room table?! I love it!