HI THERE! WHO'S READY TO CRUSH SOME SHIT TODAY? 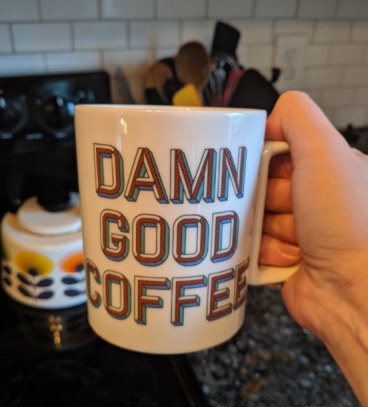 lol jk that mug is full of Theraflu, not coffee.

I don't have the flu (we "believe" in the flu shot around here, because it is the flu shot, not Santa Claus), but some absolutely brutal cold -- or some amalgram of multiple colds from Jason's work, the kids' schools, that field trip to the Maryland Germ Factory Science Center I chaperoned last week -- that will not let me live or breathe or go 10 minutes without coughing up a lung.

I didn't want to or even intend to chaperone the field trip, because I am really terrible at interacting with other people's children and never know how to handle my pack of charges. ("So you like, go to school? That sucks.") I shoot for being the Cool Chill Mom but instead end up being the Awkward and Ill-Prepared Mom who has terrible Time Management Skills. I forgot to ask about bathroom breaks until we were suddenly in a panicked sprint to find the nearest restroom two floors away; I couldn't find an empty table at lunchtime so we all ended up eating on the floor in a random corner; I nearly lost one child on an elevator, twice.

All the other chaperones seem to come armed with full first-aid kids and hand sanitizer and sunscreen and extra layers of weather-appropriate clothing and emergency plastic bags for carsickness. Meanwhile, I had to yell at my own child at one point to STOP LICKING THE ACTUAL GODDAMN WALL, OH MY GOD, IKE, WHAT ARE YOU DOING???*

Anyway, I only volunteered to chaperone because I believed I could game the system by waiting to submit the field trip form until the very last minute, by which point all the first-come, first-serve chaperone spots would surely be taken. (But then I could still tell Ike semi-truthfully that I tried to chaperone but wasn't picked, OH WELL!) It's a tactic that's worked for the last two or three field trips but my lucky streak ended when a chaperone canceled at the very last minute and I was asked to fill in.

The morning of the field trip, we were supposed to be at the school no later than 9:15. Since things like "getting places on time" and "leaving the house with clothes on" are not my forte, I woke up at 7 a.m. just to be safe. Things were going smoothly until about 8:45, when all of the following happened:

We got there around 9:17, but it was fine. The cafeteria had run out of cheese for the brown-bag lunches, so the field trip was delayed on account of...cheese.

I guess it just wasn't anybody's morning, that morning.

Anyway, I am sick, and yet in just three days approximately 70+ people will be descending on my house. I am in no way, shape, or form prepared for Friendsgiving at this point; I should be cleaning all the things and pre-making hundreds of gougeres instead of sedating my ass with Theraflu. I did -- in either a burst of mania and/or feverish folly -- decide to rearrange all the guest room furniture but then gave up halfway through, thus creating a guest room disaster that did not exist a week ago, just for fun.

Also, I just found all of these socks under a bookcase: 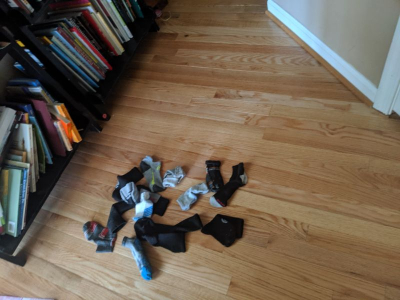 Why? Why are there so many socks under a bookcase? Why is this happening? And why are some of them toddler-sized socks that I swear to God, I have thrown out 400 million times before?

I do not know, will likely never know, and am going back to bed.

*Ike, the child who literally LICKED a goddamn WALL, is so far the only member of the household who hasn't gotten sick. So I guess the lesson here is: Get your flu shot and then also lick some walls.

Posted at 11:10 AM in breathtaking dumbness, houseness, Ike | Permalink | Comments (17)

This is going to sound depressing but I feel like you will understand...

I wish my Dad were alive so he could read this! He had a hilariously ill-fated chaperoning experience for a high school trip with my AP Bio class and he would have just simply adored the way you wrote about your (oddly similar considering the age difference) experience.

Thanks for the laugh. I hope you feel better.

Oh man. That's insane all of that happened in one morning when you had somewhere important to be. Isn't that always the way?!

OK, so I'm going to point a very stern finger in the direction of the cats for the socks. My cat LUUUUUURRRVES ALL THE SOX! and I can not turn a got damm corner in my home without finding a random (dirty or clean! it makes no difference!) sock that the cat has left behind. Yet another member of the family that cannot seem to find one of the 6!!!!! hampers in the house lol.

I was going to say dog. My dog steals dirty socks out of hampers and deposits them ALL over the house. Luckily he doesn't chew them so I can't get too upset about it. He actually prefers folded, clean socks, but we keep those away from him.

"Believe in flu shots" nearly made me snort tea out of my nose.

Last trip I chaperoned, the girls were so awfully behaved, I left them in the gift shop and told the teacher I quit. One of them apologised, the rest I still 'evil eye' everytime I see them. Fuckers.

You haven’t lived until you’ve had to yell at your child not to lick a wall at DISNEY WORLD! Like why child? Just why?

How do you pre-make gougeres ??? I want to make Smitten Kitchen's black pepper blue cheese gougeres for Thanksgiving, but making them so they are hot out of the oven seems unnecessarily painful on the big day, so I am very curious. Do you rewarm before serving? Do they stay pretty and puffed? And how early can you make them? One day, two days, there?!? Teach me please!

I thought Bernie O’s must be some cool, new Bernie Sanders thing that I’m not hip enough to know about.
I was wrong.

I do not have cats to confiscate and spread socks around the house. I do not need cats for such a purpose. I have a toddler and a preschooler who inevitably decide at some point in the evening that their socks are in the way and take them off and throw them to the side. And then continue running around and playing, at which point at least one of each pair of socks gets shoved accidentally under a piece of furniture only to be discovered months later. (maybe I should clean under our furniture more often?)

Each year's flu shot contains several strains of flu based on the best predictions available... but there are always More Flu Possibilities than they could fit in one flu shot. (My husband got the flu two years ago despite having had the flu shot; personally, I maintain that as long as it doesn't kill you, a flu which knocks you out for two to four days but then just *totally goes away* is better than a cold that 3/4 knocks you out for a full week and then leaves you with a two-month cough. But I digress.)

Also, everyone in the comments who says they need to clean under their furniture more often? Yes, dust bunnies and paper clips and errant socks are likely finding a home there, but *who cares* and no you do not need to frequently clean under your furniture. Health hazards? Clean them. Situations where you're losing things because of the ambient clutter level? Clean them. Things that drive you nuts if they're not cleaned? Sure, clean them. But no guilt over leaving underneath furniture to take care of itself until you either shuffle furniture around or move out!

(having toddler socks appear in a house in which you have had exactly zero toddlers living is a bit mysterious, I grant, however. Have any toddlers visited and left socks? Were toddler socks worn by stuffed animals at some point? Did a toddler sock somehow cling inside a rarely word article of grown-up clothing or pillowcase, only to appear years later? The world may never know...)

@Liz It's a trick I learned from The French Laundry cookbook! Pre-make the batter and then pipe into rounded silicone molds (like for candy or truffles.) Freeze and then transfer to Ziploc bags. Then you can bake them up on baking sheets whenever and have a ready supply of fresh ones for longer parties.

2 things.
1) my husband is an actual immunologist and refuses flu shots for the family, thus ensuring at least one of the kids PLUS him gets it.
2) field trips have me panicked the night before, every single time. I stay up late prepping so that no matter what happens in the morning I hope to be ready!!! Sigh. .
Have a happy gathering!

I thought the same thing about the Bernie O's!!

The socks are absolutely the fault of the cats. My cats also love socks and since my kids are seemingly incapable of putting them in the hamper they have easy access. I currently have about 20 single socks waiting for their matches.

Funnily enough I was called last night and asked to be a last minute substitute for a Science Center field trip today. I've already got a cold though so I tried to basically touch nothing while I was there.