Once again, we threw a huge party and did not take a single photo of the actual party. Perhaps this is all a strange, yearly hoax where we only pretend to throw a huge party and like, know people and have friends. Or perhaps Friendsgiving only happens in our sick, twisted minds and we really spend the day drinking and conversing with ghosts!

Here are the things I DID take photos of, in no particular order: 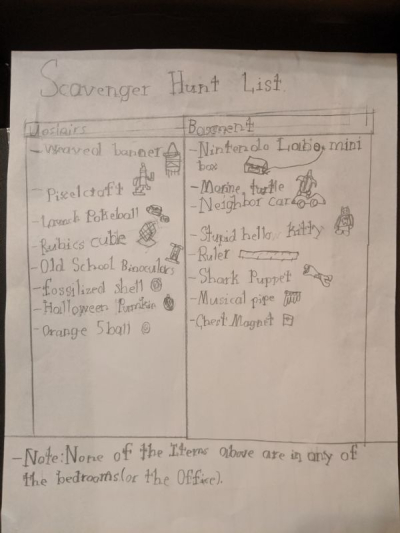 Ezra created a scavenger hunt for the kids, complete with a big box of prizes. I had to ask about the "Stupid Hello Kitty" -- was there a smart Hello Kitty out there as well, like as a trick? -- and he explained that it was a Happy Meal "girl" toy that Ike got by mistake.

"It's not stupid because it's a girl toy, though," Ezra clarified. "It's stupid because she's supposed to be a superhero but when you press on her head and it just kind of raises the arms a tiny bit and it's just..." He trailed off, visibly disgusted at the lack of product design that went into this particular Happy Meal offering.

(The "Launch Pokeball" was the Happy Meal "boy" toy Ike was SUPPOSED to get, and the source of much angst and drama that day.) 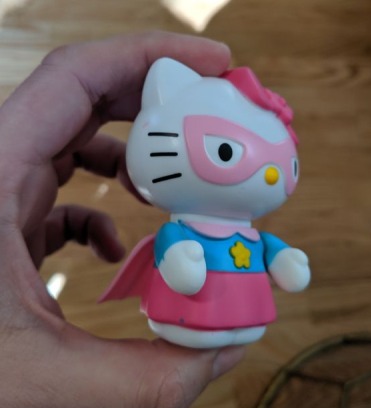 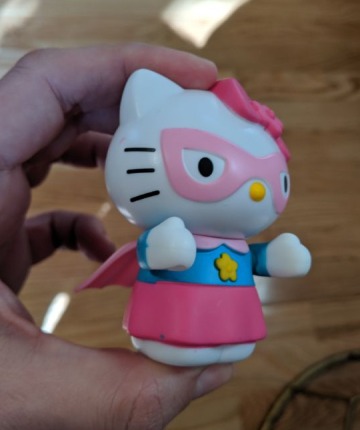 (Also, I found Stupid Hello Kitty and can confirm, it is pretty stupid.) 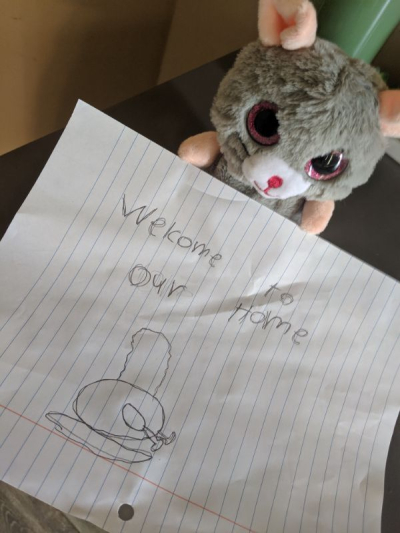 Ike created this display on a table in the foyer. (That's a drawing of a turkey that is "very hot.") This is very cute, but becomes a lot less cute when you realize that toy has a microphone and records whatever you say, then screams it back at you in a truly terrifying, high-pitched banshee shriek.

This was later moved to a shelf to make room for the desserts and accidentally switched off in the process. 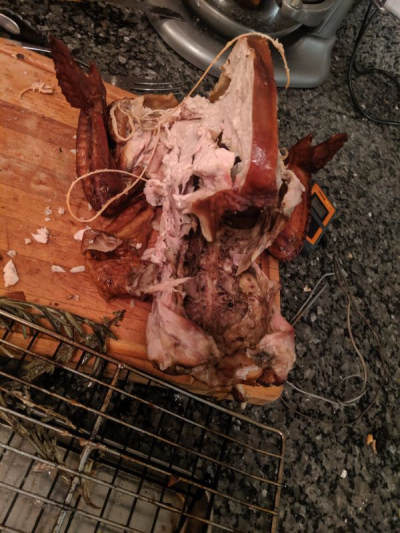 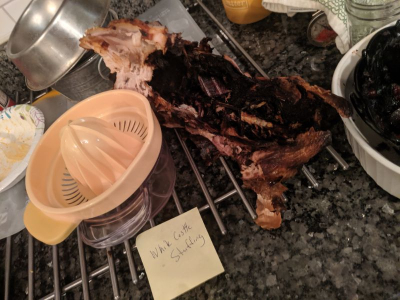 Mass turkey carnage! Jason made three turkeys -- one in our deep fryer, one in our smoker, and one (not pictured because it was still cooking at the time) using our sous vide. They were all really, REALLY fantastic. (As was Jason's White Castle Stuffing, which is exactly what it sounds like. That Post-It note was all that remained of it barely 20 minutes after we served it. Vote Double Batch 2020!)

I made the gravy, because making a roux is one of only two things that my husband literally cannot ever get right in the kitchen. (The other is rice. He always, always fucks up the rice. We don't understand it, but now there's an unspoken understanding that Amy Makes The Rice. One time I Made The Rice but asked him to reduce the heat and cover it for me once it started boiling, and as God is my witness that rice came out both burned AND underdone. He's rice-cursed!) I also made cranberry sauce and a lot of drinks.

Speaking of Post-Its, I labeled our various coolers before the party and mentioned to a few people that it was taking EVERY OUNCE of self-control to not add "ABOLISH" to the ice cooler label (DO U GEDDIT LOL), because I knew we were in mixed political company and yet I am truly, truly insufferable at this point in our nation's history. 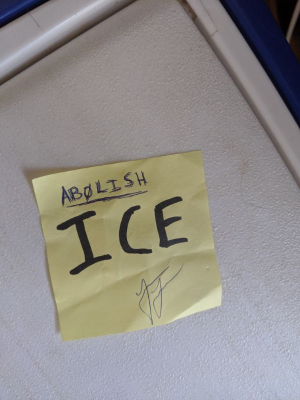 I later found that one of those guests did it for me. All I had to do was completely totally innocently leave out a pen. TEAMWORK! 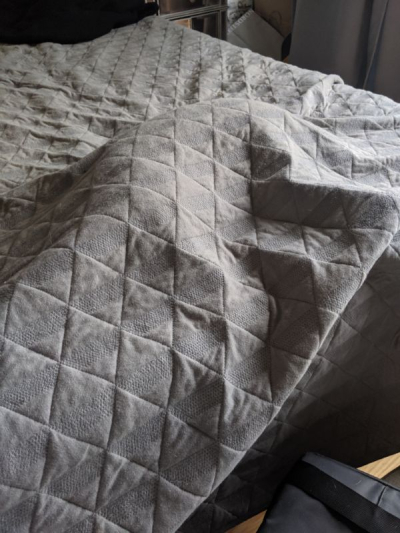 Here is poor Tormund, who just NOPED his way out of the proceedings. He was given many treats later and only barfed up a few of them on my pillow later.

I went to culinary school. I also cannot make rice.
Sold my husbands rice cooker when we moved in together, because, how hard can it be to make rice in a pot I already own/store in the cabinets. Turns out, it’s very difficult.

Your ghosts must eat a *lot* of turkey.

I'm like Tormund when it comes to eating White Castle anything.

I used to be rice cursed, until my husband introduced me to jasmine rice, it always comes out perfect. I could never get the timing of turning the heat down and I cannot resist the urge to stir. Jasmine rice forgives all sins, I refuse to buy any other kind now.

Rice cooker ftw! Also great for days you have no idea what’s for dinner. With one button you are half way done.

Idiot-proof rice! In a lidded glass casserole, combine 1 cup white rice, 2 cups water plus a splash, and salt. Put in the microwave for 6 minutes high and 20 minutes power level 3 (you just push time cook, 3:00, time cook, 20:00, power level 3, start). It will come out perfect. Adjust the first time for more/less rice (that is to get it to a boil) and the second time if you cook brown rice instead (that is the simmer part). I promise Jason can do it, it does not take an extra appliance, and it makes no mess!

My husband is also unable to make rice and I just don't get it, but then again I can't make gravy so who am I to talk?

Awww, Tormund. We only have the 4 usual hoomans at this house for Thanksgiving. Our friendsgiving happened at a friend's ranch an hour away, where we jammed and ate burgers, hot dogs and homemade pizzas, which I made on their grill.

Why, oh why did White Castle stuffing have to become a thing when I can no longer eat the bread, the ketchup, and probably the burgers themselves?

Love the ABOLISH addition, too. Your friends are clearly awesome.

Hard Boiled Eggs used to be my cooking nemesis, with rice a close second. But now, thanks to my InstantPot, both come out awesome every time. :)

Hi Amy! Just wanted to let you know I read your article about cradle cap in older children on AlphaMom and it was so helpful! I’m going to try your suggestions! I was feeling hopeless, as my beautiful daughter was losing hair in those spots! My pediatrician did mention that it was cradle cap, and that it seems to be more common in children with very curly hair (as my daughter has) but didn’t have a lot of suggestions, just really the same as what your pediatrician suggested. I’m excited to give these ideas a shot! Thanks again!

Poor Tormund! We had our living room floors replaced a few weeks ago, and our orange tabby did the same thing. I expected her under the bed, not under the covers! Maybe it’s an orange tabby thing.

We bought a new house this year that has a gas stove. I have only had electric stoves to this point. Up until now, I have never had a problem making rice. Cooking on a gas range is very different, and I just can't figure out why the rice won't cook through. It is always still hard at the end of the twenty minutes of simmering. If there is some trick to cooking rice on a gas stove, please advise.

Rice cooker times infinity. So worth it!

I also cannot make f'ing rice. Its either burnt, under cooked, watery yet over cooked. Every failure was different. An inexpensive rice cooker solved my incompetence. I hate having a bunch of small, single function appliances, but this one is worth the shelf space.

Rinsing rice first makes all the difference. And jasmine rice. And the instant pot helps too. What is White Castle stuffing?