Home Archives About Subscribe Advice Smackdown Tip Jar
Blow Us All Away, Part Ezra
The Scottish Play the Musical Jr.

To encourage Ike to stick with his various reading and writing exercises, we bribe incentivize him with plushies. The kid is crazy for plushies. 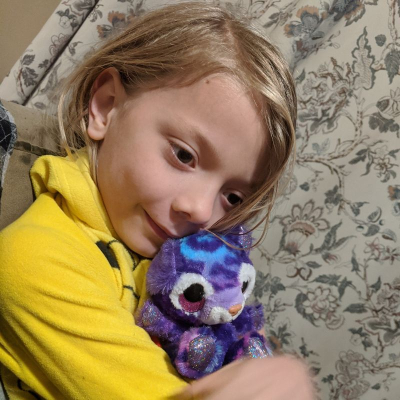 Jason came up with the ingenious idea to buy a couple bulk bags of cheap knock-off Ty Beanie Boos. (You know, those little toys with the oversized sparkle eyeballs that they sell literally everywhere, so you can't walk into a grocery store or even a gas station without your child begging for a fuchsia and purple giraffe-type thing that you could've sworn you've bought five times already, but nooooo, that was Gilbert, this is Twigs. And then the other one is Sweetums, whose birthday is in February, not August. COMPLETELY DIFFERENT AND VITALLY IMPORTANT, MOMMMM.) Ike gets to pick one as a reward for say, mastering a new sight word deck, doing well on a spelling test, completing a writing assignment or a challenging book, etc.

The plushies make him very happy, and the possibility of even more plushies motivate him to seek out even more challenges, vs. doing the bare minimum or nothing at all. Which is what we were getting before, in the pre-plushie era. I'd find stacks of homework worksheets mashed into the pockets of his backpack -- worksheets that, once we sat down to tackle en masse, STILL only took him minutes to complete correctly. But he was so worried and self-conscious about mayyyyybe not being able to read the math word problems by himself, or having to write a sentence with spelling mistakes, that he went with that good ol' time-tested anxiety move of straight-up avoidance. (That's my boy, says the girl who's been putting off a call to Verizon customer service for the last eight months.)

Anyway. Plushies. Not even a word, according to my computer's spellcheck, and yet one I've typed so many times already this post is basically a sea of angry red squiggles.

Ezra also really loves plushies. But he loves his little brother even more. 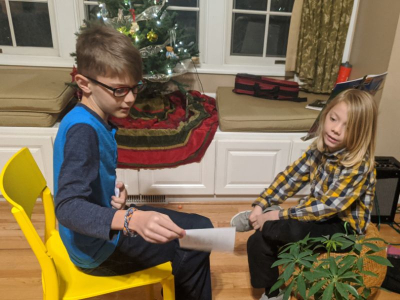 Every night, after completing his own homework, he spends time helping Ike with his sight words or whatever the Plushie ChallengeTM du jour is. 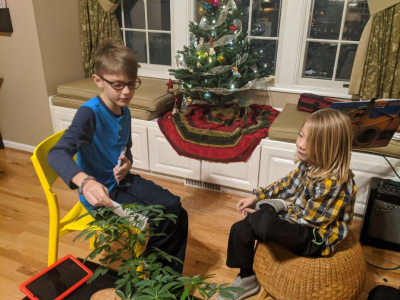 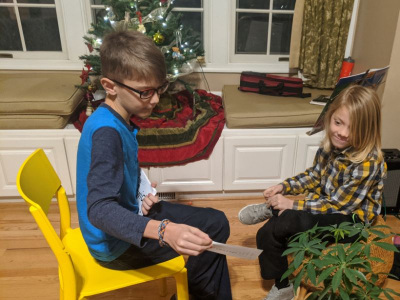 When Ike succeeds and wins his prize, an old-school Charlie Brown dance party breaks out in celebration. These two make a great team.

(Oh, and no, we didn't massively downsize our Christmas tree this year, that's just a smol bonus tree we got for the front window. Our real tree is in the family room, and humongous, and Tormund tries to climb it, and oh my God, getting it was a Whole Big Thing that is a blog post for another day.)

We call them snuggle pets in our house and they are v. important to our guys too. Go Ike!

My younger daughter is 15 (yes, 15 years, not months) and loves soft toys to death. And she loves the Ty things a lot, to the point where we have the entire "family" of flamingos (i.e. all the different sizes, from the key chain version right up to the massive one). Of course, officially they're all called Gilda, so she's had to improvise: Gilda is the biggest, then Gildina, then Gildette and finally Gildouchette the key chain. Her bed has almost no room for her with all the soft toys, all of which have names, personalities, favourite foods... I do sneakily have to admit that the flamingos are kinda cool, with their big, sparkly eyes and pudgy feet...

We are all about the dragons in our house and HEAVEN FORBID I call one of them by the wrong name. "Mom, that is not Sapphire, that's Anora, JEEZ." Dammit, I just googled it to get the name and discovered there's a new one with the changeable sequins AND a unicorn dragon and now I feel compelled to complete the set...

I have been putting off a call to GE customer service to get a replacement wheel for the refrigerator we installed 18 months ago, so I'm right there with y'all on the avoidance-of-unpleasant-things-that-turn-out-to-not-be-so-bad-after-all...

My 9YO also avoids math homework sheets because he's worried he will have to write. He was recently diagnosed with dyslexia as well, but it mostly affects his handwriting.

Also, Ike's hair has the most beautiful highlights. I'd pay my hair stylist hundreds of dollars to recreate that and it still wouldn't be as amazing.

We call them "friends", which is lovely and sweet until your child is 14 and it is time to re-home them and they all have names and family trees and you can't bear to split up the families. That was me, btw. Which is why we kept the extended giraffe family. *sigh* Love your sweet, hard-working, good-hearted boys!

It is so sweet that Ezra helps Ike like that! I can only hope that my 4 year old helps and nurtures her little brother when they are older - currently there's lots of screaming about him stealing her toys (often plushies). Speaking of which - what do you DO with all the plushies? Do you have an excellent storage mechanism so they don't overrun your house and drive you crazy? We may have a problem over at our house. They end up EVERYWHERE.

Also - how awesome that you found a great motivator for Ike! We've been coasting on smiley faces charts (because I'm not organized enough to get a real sticker chart so we just draw smiley faces) and small rewards (books or treats) at the end, but they are losing their motivational power.

Ezra, you are the good in the world I needed to see today. Thank you.

Verizon Customer Service Pro-tip:
I also waited 8 months to call them... or rather I called a couple times, was told things were fixed (they weren't) and also hung up on several times.

Wait for a day where you are angry. Go read the news. There, angry. Go into a Verizon store. A real one, not some third party place. Come armed with data. MAKE THEM CALL CUSTOMER SERVICE FOR YOU IN THE STORE. If they start to stonewall you at anytime, just start raising your voice a little bit. They will back down. They do not want you to make a scene in front of customers. Only thing that works!!! That and calling companies out on their Facebook page/ads.

Ezra is a fine mini human, and will make someone a great partner someday ❤

Go with G Smith on the Verizon thing. Calling them will only send your anxiety through the roof. I once spent THREE FULL DAYS on the phone just trying to get them to send out a technician. And then the tech never showed 🙄.

I LOVE that Ezra is helping Ike and encouraging him.

Here's a tip for Verizon: Get on their online chat. It's sooo much easier and nicer than talking to people. We just chatted to order new cablecards for our new Tivo. I chatted with them in Feb and got a way lower cost new plan that is exactly the same as the old high priced plan. Never call, always chat.