The Best Things I Bought For My Brain (2019 Edition)

In honor of Cyber Monday, it's better mental health through consumerism, betches.

In no particular order, other than in the order I remember them as I wander around my house: 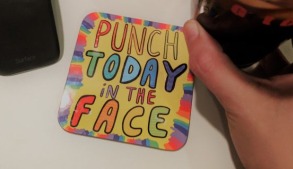 The part of my brain that took the longest to heal (post-apocalyptic ZZZZZPPPTTTZZZZ-style short-out) was/is, unfortunately, the part that allows me to simply sit the fuck down and get shit the fuck done. Oh, I'm plenty good at making long, elaborate to-do lists around 3 a.m., along with the many terrible consequences that will surely rain down after my subsequent failure to complete said to-do list. But by 9 a.m., I've lost all sense of urgency and/or curled into a paralyzed ball of panic and procrastination. There are a LOT of mental health planners and motivational office supplies aimed at correcting this pattern, but I found most of them either too shmaltzy and motivational-quote heavy, or entirely too detailed and similar to my 3 a.m. version. (DRINK EIGHT GLASSES OF WATER OR FAIL AT TUESDAY!) This one from KatieAbeyDesign on Etsy is way, way more my speed. 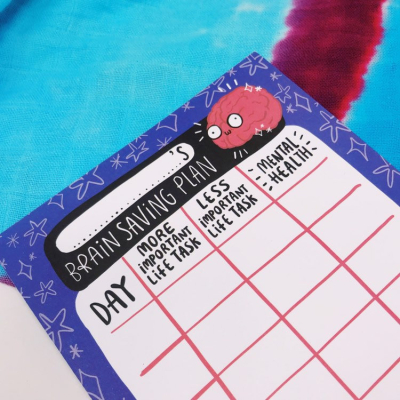 Simple, to the point, and advice I cannot argue with. Never leave home without it.

I get compliments on these earrings all the time, which is great! Even better is that, at 10-12 earring sets for $10, I can graciously accept the compliment by shouting THANKS THEY COST LIKE BARELY A DOLLAR! (My fellow awkward-compliment-accepters feel me on this one, right?)

Not really any particular mental health story here except I finally bought a Water Pik this year and don't know why I waited so long. It's nice! 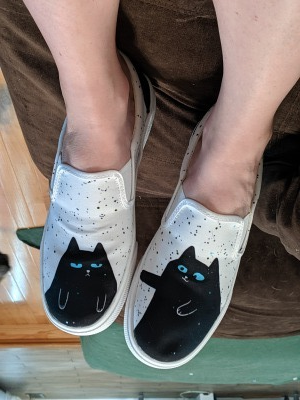 HOUSE PANTHERS....IN SPACE! These shoes make me happy. (Although ordering up a half size might've made me a skosh happier; I have wide feet and it took awhile to fully break these in.) Just one small part of my larger plan to dress like a crazy cat lady full time.

BEHOLD THE LIFE-CHANGING MAGIC OF SHOVING DOZENS OF STUFFED ANIMALS INTO A BEAN BAG COVER! I purchased three of these (in the large size -- two for bedrooms, one for the basement) and single-handedly solved our stuffed animals clutter problem (and the related dogs-chewing-and-or-peeing on stuffed animals problem). Plus, with the out-of-sight-out-of-mind principle in place, I can now effectively "edit" our stuffed animal collections over time when nobody's looking and/or remembers that one weird cheap bear they insisted on buying from that rest stop on 95. Also, they make for a lumpy-yet-cozy seat! 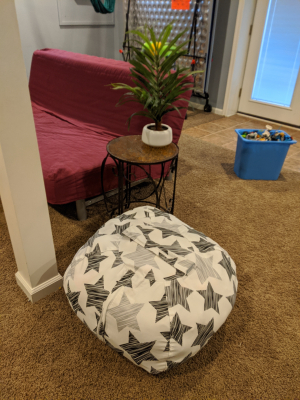 You know what I love, anxiety be damned? Coffee. You know what I hate? Complicated coffee. I don't do Starbucks. I drink it black. My current coffee maker (a Technivorm Moccamaster that I've owned for more than a decade at this point) features a single on/off button and that's it. And that's all I want! That's all I can honestly handle in the morning, okay? I'm just going through some things, alright?  So every time I've looked at various cold brew methods and iced coffee makers I've been turned off by Too Many Steps and Extra Features...until Jason bought this annoying-looking hipster-cold-brew-in-a-goddamn-mason-jar maker. It is so ridiculously simple to use and makes such deliciously simple iced coffee that I went and bought a second one so we always have one jar ready to drink and another one cold-brewing in the wings.

After a two-week cold brew caffeine bender, I decided to expand my refrigerator-brewing skills to include iced tea. This maker, much like the Hipster Cold Brew, simply requires 1) water,  and 2) a bunch o' tea bags mashed into the center filter. It makes the best iced tea I have ever tasted, and I am officially caffeine-drunk on my own power. 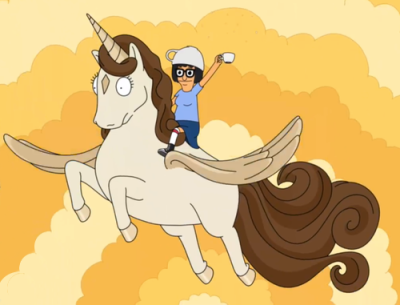 I've been trying to be better about eating protein in the morning (if only to balance out all the caffeine), and homemade sous vide egg bites are the reigning make-ahead champions. You'll need a sous vide  (we love our Anova), of course, and a basic recipe -- you can swap out the fillings with pretty much anything you like. We do a double batch on Sunday using a combo of the silicone molds and 4-ounce mason jars (shut up) -- the jars sink and the molds float so you can make more at once. Pop one or two out in the morning and broil for five minutes. Happy brain food, especially with bacon.

There were many other purchases that led up to this one, so perhaps I should break down the proper order.

Step One: Buy some books on how to bake bread.

Step Two: Learn to bake bread and grow a variety of sourdough starters. (IN MASON JARS OH GOD SAVE US.)

(NOTE: Not to be confused with learning to defend bread from birds. That's a whole other story.)

Step Four: Buy a bread box for storing all the bread, so much bread, all of my friends are bread. 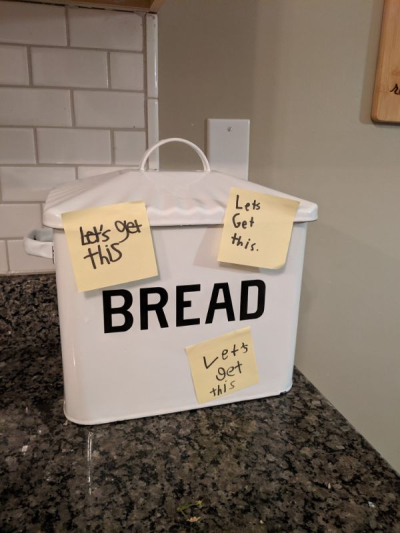 I mean. Duh. It's like Prozac for your wall. 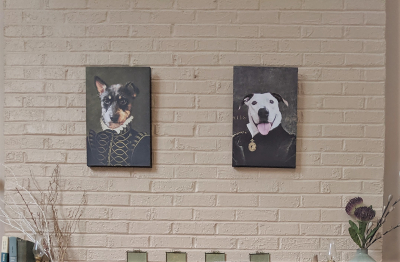 Posted at 11:45 AM in ANXIETYYYYY, depression, houseness, shopping | Permalink | Comments (6)

Those dog portraits are awesome! And I added the cold brew Mason jar thing to my wish list. Fingers crossed!!!!

I'm glad you recognize that all these things help your mental health! As an adult who was unofficially diagnosed with ADHD when we were on my older son's journey to an autism diagnosis, I sought treatment for it when I began noticing it interfering in my ability to study. Later, my boss noticed all the negative self-talk I do and commented on it, so I added a therapist to the ADHD med management.

I got a crappy health diagnosis of yet another rare issue (I joke that I'm the 2% girl to my doctors, cerebellar strokes are 3%), so I have relied on both my psychiatrist and therapist to help me where my own ability to preserve my mental health is not working so well. (depression and severe anxiety in my case). I've gone from only taking ADHD meds two years ago to 5 meds, 3 are for mental health.

This weekend, I fretted over making a purchase with the black Friday specials, then ended up on HSN's website to buy the item. The rational part of me says that while I am on medical disability from work I shouldn't spend $200 bucks, but the self care part of me realizes that having this item allows me hours and hours of time in my crafting happy place - bonus is that I can make a bunch of Christmas and Hannukkah gifts because I will have a fucking heat press.

I'm rambling, partly because I haven't taken my ADHD meds yet, but partly because you need to know that others struggle, in different ways. We've never met in real life, but I've related to your posts in so many ways over the years, going back to the first Tire Gate! Keep talking about your mental health struggles, offline, and online as you feel the need to do so. The more you do, the better you feel.

+1 on the stuffed animal bean bags!! Those reduced my clutter-related stress instantly!

I was wondering about those Crown and Paw portraits; I get ads for those all the time. Are you happy with the quality?

My husband looked at me like I was smoking something when I brought the stuffed animal bean bags into the house. I looked at him like "Let me just try this one thing." Yep--they work. My only issue is my offspring when told to put all the stuffed animals and blankets away, also tend to grab their PJs and put them in there. We are down two PJ tops and four socks that I know are in one of those bean bags (No they aren't Mom). Oh well, I overbuy for a reason. When they want those PJs again (or socks), they will dig them out.

Other purchases that made my husband question me related to yours: Mr. Coffee Ice Tea Brewer (I drink A LOT of tea) and some piercings. Going for a daith for Christmas this year.

If you need another project, the next thing you need to do is make your own butter to go with your bread. All you need is cream and a blender (Or a mason jar if the kids need something to do). We use raw Jersey cream from our cows. Then you will will have the best butter and buttermilk.