The Scottish Play the Musical Jr.

It's the most! Wonderful time! Of the year...

...When our school district decides to cancel a full day of school over a dusting of snow so inconsequential you can still see the tips of grass and the roads could maybe be generously described as damp. Even Noah was like, "I'll take it, but they're crazy."

The cancellation also means Ike's long-awaited performance of Elf Jr. The Musical has been rescheduled for a still TBD future date. Or maybe it's Elf The Musical Jr.? Hmmm... 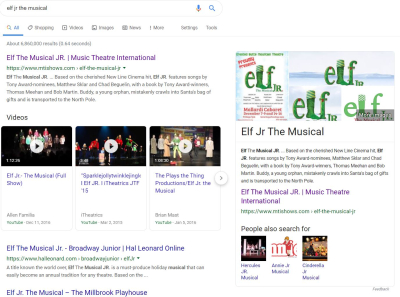 I don't think anybody knows, to be honest.

He was super disappointed, but quickly saw the bright side of having more time to work on his lines. He has a scene playing "Greenway," the Evil Children's Book Publisher who demands Buddy the Elf's dad work on Christmas, the monster, and he is hamming it the fuck UP, delightfully so, but he's still struggling to pronounce the word "unemployment." It keeps coming out as "unempointment."

(Everybody gets two speaking scenes as different characters, unless they're singing a solo, which Ike didn't want to do. So he also has a scene as Buddy, where all of his lines are delivered at top volume while running around in excited circles. He's got that one nailed down.)

The cast was supposed to have a little pre-show pizza party and receive their show shirts tonight, so that's also a bummer. I'm looking forward to a surely adorable show, although I sense casting and the kids' baby-lispy line deliveries might make it just as confusing as the title. Oh well, We're all just there to see our kids in cute hats, get suckered into buying a DVD, and hopefully set our children on a path to Ultimate Dorkdom.

(Luckily we're still a good few years off from this, which, as a former high school theater kid, STOP ATTACKING ME SNL, AND AIDY BRYANT'S CHARACTER IN PARTICULAR.)

This... may be the best SNL clip I have ever seen.

Haha! I'm a fan of ultimate dorkdom! Will you be able to share some of the cuteness with us?

I was a band, theater, and art kid in high school - I wasn't very good at any of those things, but I loved them. I had all these fantasies of my kids doing something - anything - remotely like this. I WOULD ENJOY IT and IT'S ALL ABOUT MEEE! But, no. My oldest, well, he likes to ride his bike and play video games. My middle one has grand dreams of being an professional YouTuber, while running an animal sanctuary and doing math for fun. My youngest is only three, so maybe she'll be a joiner. If not, I'm just going to be the community weirdo who goes to all of these performances.