Anybody got any recommendations for nice-looking fake trees that I could maybe get on sale right now? Because look at this shit. 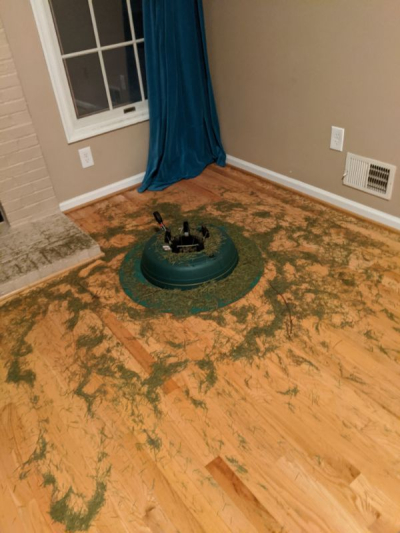 Although, honestly, I just swept up the carnage and burned it all up in our fireplace. Jason came inside from dragging the tree-corpse to the curb and said our neighborhood smelled amazing!

Hey, remember when I had a

baby? Don't ever do that, because look at THIS shit.

A smallish-large niche corner of the Internet lost its mind over that, while he was just like, "GREAT, another THING I have to DO now. It never ENDS, these days."

(I just now watched the yard trim collection guy pick up, toss, and mulch our giant-ass tree. It took him barely a minute, but I bet he hates us now.) 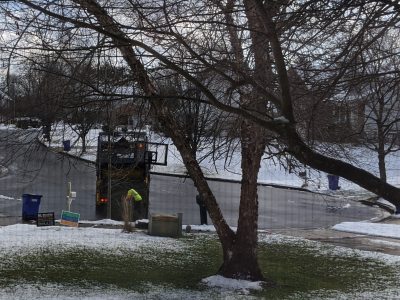 (Yes, it snowed! Don't worry, they didn't cancel school for that piddly lil' covering. They simply closed three hours early yesterday and had a two hour delay this morning for maximum schedule fuckery. YOU CAN STILL SEE GRASS, PEOPLE.)

Look at this shit, for no particular reason (other than BFF doggo adorableness, of course): 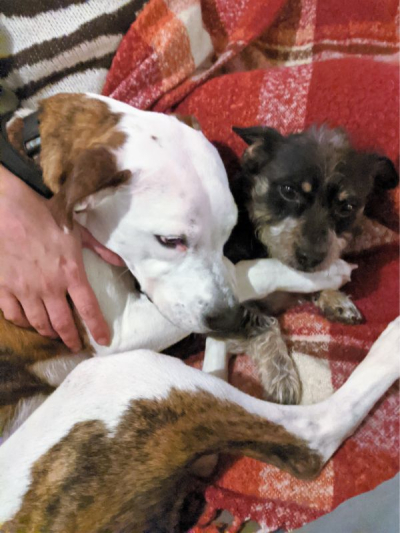 We originally decided that we wouldn't take in another foster dog until the foster cat was adopted, but you know, ON SECOND THOUGHT, we are suckers. The cat is still here but we have tentatively accepted a new foster dog placement, tentatively arriving this weekend. It's a complicated story (the rescue that had her before literally burned to the ground and rehoming the surviving animals has proven to be really emotionally gut-punching for everyone involved), so fingers crossed, because she seems like a sweet old lady who would fit just fine at the Storch Zoo. 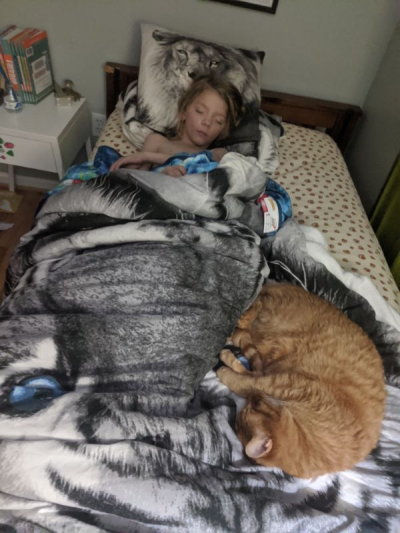 (Meanwhile, Tormund is the rescue's Cat of the Month! Which means a half-price adoption fee in January! Someone please take him I am tired of scooping his poop!)

The fake tree options at the Balsam Hill store at the Columbia Mall were very slim -- literally, they had only slim trees. And half trees. And corner trees. But the discounts were good!

Do you have a tree skirt? We had barely any needles on the ground I found because we have a knitted skirt that caught them all. Then I just shook it outside. We also added this tree miracle gro stuff to the water so it didn't drop many.

We get a real tree every year simply for the sheer joy of saving it in our backyard until June, at which point we set it upright in our fire pit and douse the sucker with lighter fluid (spoiler alert: it doesn't need lighter fluid). It goes up like a Roman candle in 20 seconds flat. I stand by with our garden hose ready in case something goes wrong (what could POSSIBLY go wrong?!).

Like another commenter wrote above, we used the miracle gro pine needle additive this year and it made a huge difference!! And using a tree skirt that I shook out once in awhile took care of any strays. Game changer! My husband loves having a a real tree and I love a nice re-usable tree, but we get a real one every year and will unless the spirit moves him otherwise.

I just glanced at that last picture and thought it was you in bed with a monstrous gigantor cat. Maybe time to visit the old optometrist again. Or clean my laptop screen or glasses or something.

My 3 year-old's preschool opened one hour late today at 10. Of course today was my two year-old's doctor appointment, which I scheduled for 9:30 since that works perfectly with normal school drop off time. Whatever, she only goes until 11:45 anyway. Snow (is rapidly melting) day!

Message me if anyone (totally vetted! totally NOT a bad person! totally and completely vetted, with references and home visits!) wants Tormund, and I’ll pay the adoption fee. (TOTALLY VETTED!)

I got my most recent fake tree from Tree Classics online. Never saw it in person and they have a million different kinds. I was looking for something VERY specific - silver tree, prelit, between 4-5 feet tall because it sits on an end table to prevent dogs from wrecking it and also, very tiny house. I freaking love it, it's got a vintage feel but I love not having to put lights on and it's big enough to say "I have an actual tree". I can even just barely get it up/down from the basement without taking it apart. Right now they have most items 60% off.

I got my fake tree on Amazon.

Omg love the tiger blanket!!!! How did I miss that before?? Source???

@Laura Ike's duvet cover is from (WHERR ELSE) Ikea.

And re: the tree skirt. We have one, but ditched it this year in favor of a tree collar because the cats won't leave the skirt alone and mess with it/bunch it up/flip it into the water etc. Last year I spent more time crawling under the tree to rearrange the goddamn skirt than it took to sweep up those needlesa.

Are you sure that’s grass outside or is the snow covered with needles from your Christmas tree?😂😂😂

We bought a fake tree this year because of allergies. We liked this one from Home Depot:
Home Accents Holiday 6.5 ft. Pre-Lit LED Wesley Spruce Artificial Christmas Tree with 300 SureBright Color Changing Lights

May I make an environmental and very much non-judgmental plea for keeping with the real Christmas-tree?
We had to carry out research with our kids here in France into the topic and found this really interesting article child-friendly article (in French, but including it anyway, in case you have other Francophone readers https://www.1jour1actu.com/info-animee/acheter-sapin-noel-detruit-foret/).
In a nutshell, Christmas trees are grown locally, on specially designed farms, so they do not destroy the environment and in fact contribute to tree planting on the planet (CO2 absorbtion, holding the earth, serving as shelter to animals, etc.). Artificial trees are often made in countries such as China, which means significant carbon impact in terms of transport, and are made of plastic. This means that, unless you keep them for +20 years, the environmental impact is negative.
I've just found this article in English from Good Housekeeping, which pretty much says the same thing (it mentions in addition potential health exposure): https://www.goodhousekeeping.com/holidays/christmas-ideas/a20705674/real-christmas-trees-better/
Ok, getting off my soapbox now. Thanks for considering :)

I know this is late, but the Balsam Hill website has the most amazing looking trees ever. You may have to trade in one of your children to afford one, but at least that’s one less moldy towel on the floor?