Things That Do Not Work, Part Three

(Things That Do Not Work is a sporadically running feature on things in my house/life/general existence that Do Not Work. Sporadically means "I haven't written one of these since March of 2019." Try using it in a sentence today! Anyway, here is Part One and Part Two.)

This towel rack. It Does Not Work. 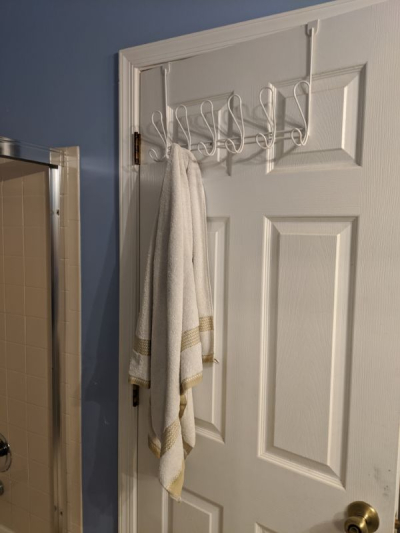 This particular towel rack was left behind in the kids' bathroom by the previous owners, probably because they learned, as we have, that it Does Not Work. No one uses this towel rack. Except for me, when I hopefully and foolishly hang fresh, clean towels on it every laundry day LIKE A SUCKER. 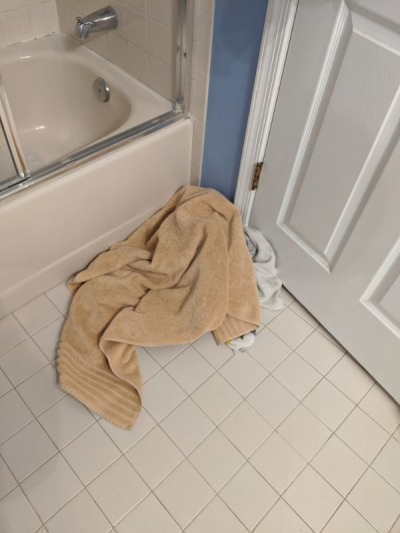 THE FLOOR IS OUR TOWEL RACK NOW, MOTHER.

There is a photo somewhere, in the deepest recesses of my camera roll (aka last month), of two towels I discovered on the floor of their bathroom. One is absolutely covered in black mildew spots. The other has been peed on -- likely quite recently! -- by a dog. I will not post it here, because it is entirely too disgusting.

(Apologies to all of my friends and family members who received said photo in an ALL CAPS text message from me. You are the wind beneath my mold-towels.)

The worst part about that photo is that I snapped it after two out of my three children had already taken showers that evening.

I pulled all three of them into the bathroom after that for an illustrated, come-to-Jesus lesson on the importance of Hanging Your Damn Towels Up. I demonstrated how the towel rack worked! I showed them the alternative options, like the shower door handles, the built-in towel rack next to the tub, hell, I told them I would happily accept the goddamn doorknob -- just please, please stop leaving your towels in a damp cruddy mess on the floor.

This Does Not Work either: 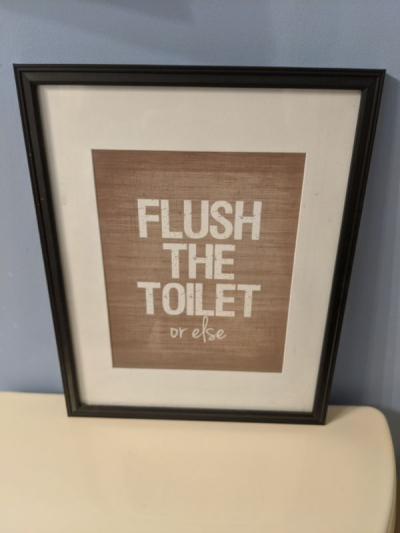 But it does help explain to anyone who might be feeling a little judgy about why I enter this bathroom infrequently (SPORADICALLY) enough for the towels to sprout fungus and/or legs. Ugh. Gross.

This extra-large bathroom caddy -- that I meticulously selected and organized for them last year; try to imagine the carnage before it was there and I was asking them to use shit like the MEDICINE CABINET or the PLENTIFUL UNDER-THE-SINK STORAGE -- only Sort Of Works: 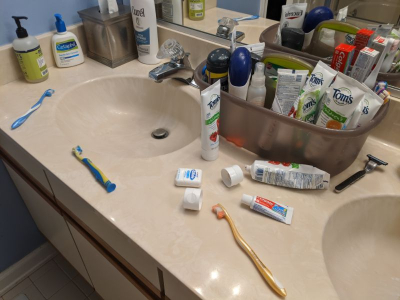 To address the obvious question of WHY do we have like, fourteen half-empty tubes of Tom's of Maine toothpaste, the answer is: I have no goddamn earthly idea.

But! Credit where credit is due! This automatic spray/air freshener gadget DOES Work! 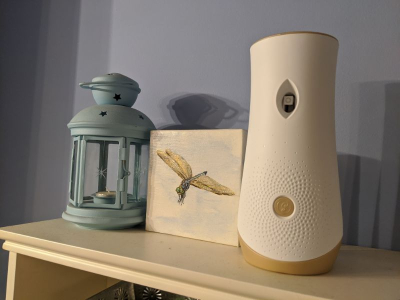 I mean, it tries. It does its absolute best. Which is all any of us can do these days, right?

Get rid of the over door rack and move to command hooks closer to the kids height.

I would get a "Flush the Toilet" sign for the bathroom but now I know that is doesn't work. Thank you for saving me that time and expense.
The reason I have fourteen half-empty Toms of Maine toothpaste tubes is sometimes it's hard to find the kind my son likes so when I see it I buy two. Then he tells me he already has four tubes. And yes, I did put a tube in his stocking at Christmas. I can't help it.

I have the same conversation with my ADHD 12 y/o every. effing. time. he goes to take a shower:

"What do you need to do with your towel after your shower?"
"Hang it up on the towel rack."

And yet...........he leaves the towel on the floor of his bedroom every. effing. time. I guess the towel rack Does Not Work.

this might be an extreme, but what if you stuck a roll of paper towels or even just a face cloth in the bathroom, and hopefully after a very short period of annoyance of not being able to dry off with a proper bath towel, they’ll remember to be more conscientious of hanging them up.

My toilets (usually) get flushed. What they don't get is cleaned...at least the toilet upstairs that I DO NOT USE. The one in the master and the one on the main level get cleaned once or twice a week (at least) but the one that I DO NOT USE gets cleaned once or twice a month...because I cannot stand it (I mean, how hard is it to swish the bowl with the brush...it's not like I ask them to use their toothbrush or anything...).

Did you know another fantastic storage location for wet towels is the floor of ones bedroom? Apparently works way better than the towel bars OR hooks in our kids' bathroom, too. Also thank you for letting me know the "Flush the Toilet" sign would not work. If you find anything that does work to get the toilet flushed, please let us all know.

My 6-year old does not remember to flush, but he always changes the roll when he uses the last of the toilet paper. I guess I'll keep him.

Did have a "Flush the toilet" sign that I made the guilty child draw herself and posted it. That did work, but it took several months to not have to return and point to it. (Said child is also on the spectrum, sensory issues, generally very bright but absent-minded.)

I thoroughly appreciated your Clueless reference :)

The hill I may die on is the shower curtain. Open the motherfucker (That was way harsh, Tai!) after you’re finished showering! It takes two seconds, almost zero effort, and helps slow the inevitable growth of mildew. WHY can no one in my house, including my husband, manage to remember this?! I will not let it go!!!

Apparently the towel rack Does Not Work in my house either, as my husband seems to think the best places to leave damp towels are on the floor of our bedroom or on our actual bed. Two of them. TWO towels for a man who is average sized and generally light on body hair. I, a tall woman who is on the bigger side with actual hair to dry in a towel, use one towel. It goes back on the rack. I fear my children will go the way of their father.

So my first thought upon seeing the first line of this post and the photograph was “That towel rack doesn’t work because.... it’s not a towel rack”.
That’s the thing you hang on the back of the bedroom door where you hang your robes or your cardigans.
Or it even goes on the inside of the coat closet for hats and scarves and hoodies.

Towels really don’t go well on hooks... unless they all have corner loops and even then.. how many kids are gonna hunt for the loop to hang it.

Towels should go on towel rails. I think you should be able to find a replacement for this back of the door thing in the form of something with towel bars/rails.
I mean obvs getting the kids to USE it is a totally different story I know but please just banish the so-called ‘towel rack’ to somewhere other than the bathroom!

This sign worked instantly for my teenager: FLUSH the TOILET or IWILL POST A PICTURE ON INTERNET

It's possible that I have told my children that the next time I encounter an unflushed toilet in my house, I will include its contents in their food. And not tell them.

I wish I could say this has put the fear of poo/pee pie in them. Maybe I will have to tell them that I have done so...then again, they are picky enough eaters as it is.

DAMN IT ALL AND BATHROOMS ESPECIALLY

Thoughts: 1) you need counter baskets (and toothpaste tubes) for each child. Multiply x 3. Then you can confidently call out the child whose mess it ACTUALLY is ... 2) towel rack is, as others have noted, not usable for kids. You need sommat else!

But I do like the fire and brimstone approach of removing all towels and leaving just face flannels. Evil.

Be grateful that you have a bathroom you can ignore. Kids use our bathroom and I may well go nuclear next time someone uses my personal towel and leaves it damp and icky...

I loooove Jaclynn's suggestion to provide a roll of paper towel or just a facecloth !
For the toothpaste and brushes, how about clearing the counter by just shoving everyone's stuff (open tubes and brushes in the state they're in) in a (trash)bag which you leave on the counter and let them figure it out?
The threat of it is usually sufficient in our house, but I have been known to actually do it and leave them to sort out their bag when the room got waaaay too messy.