Something Jason and I struggle with is making sure each of our individual children get enough quality one-on-one time with us. We finally seem to have hit a solution by just picking random dates on the calendar and marking them off as "Mom and Ike Night" or "Dad and Ezra Night." We have no specific plans for what we're actually going to do on those nights, but dammit, we're going to do something.

For the last couple months, Mom and Ike night has mostly been about ribs. Ike loves ribs. He is otherwise our pickiest eater by far, but ribs, man. He will eat the shit out of some ribs. 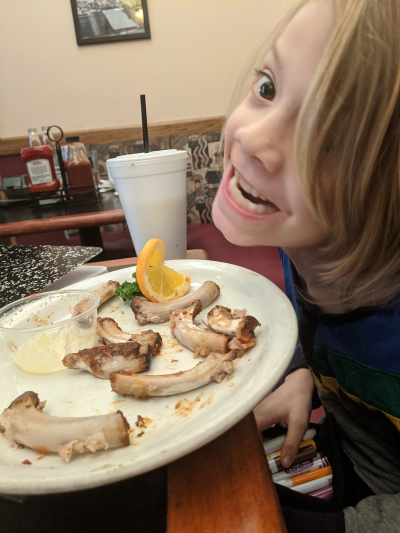 Chocolate milk is another must for Mom and Ike Night. 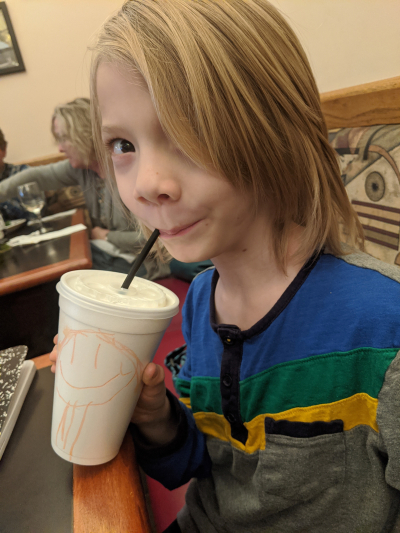 These nights are a screen-free zone, so we usually bring along some word searches and books and art supplies. 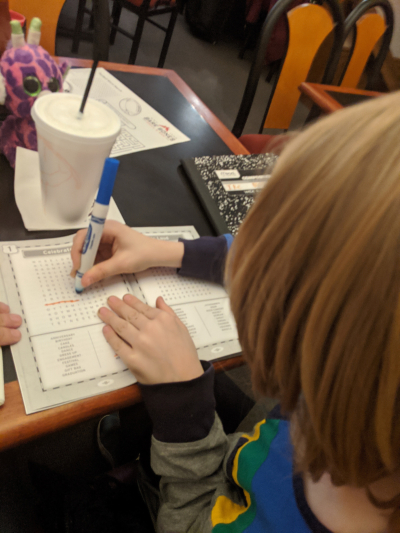 (And plushies. So, so many Very Important Plushies.)

This past Wednesday was our latest Mom and Ike Night, and our plan was ribs, chocolate milk and a trip to Michael's for more art supplies. 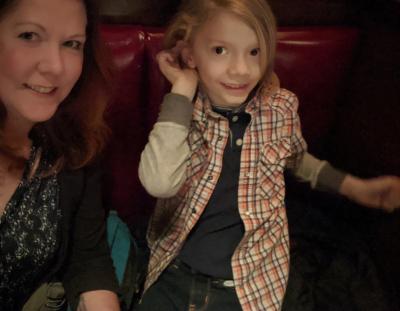 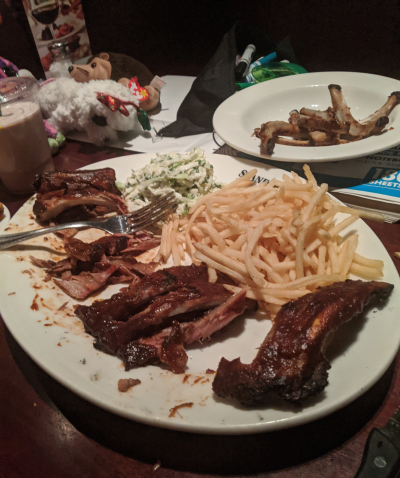 We ordered a full rack to share, but I actually didn't end up getting to eat very many. The fries were good, though! 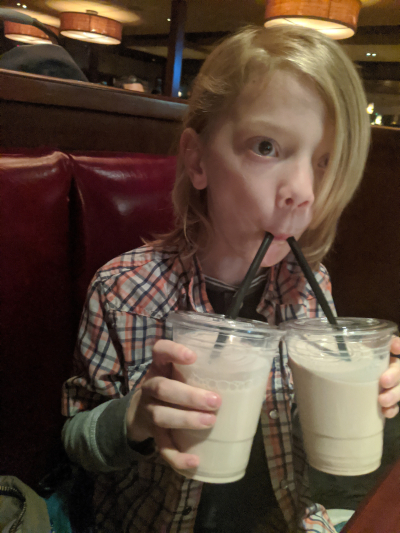 And somehow he ended up getting double-served on the chocolate milk.

On the way to Michael's, however, you'd have thought I was the one drunk on chocolate milk, because I almost missed my turn, caught myself just in time, and then...BLAMMO, nailed the curb of a median with the passenger side of the car.

(In my weak-ass defense, it was dark and raining pretty hard at the time, and I didn't realize the left-turn lane was boxed off by a long, narrow median and just managed to clip the very end of it.)

(And yes, I realize the median is probably there to prevent dumbasses like myself from going, OOPS THAT'S MY TURN! and cutting in at the last minute. But OOPS IT WAS MY TURN.)

Ike, naturally, thought we'd gotten into an actual, major car crash and burst into tears. (A Mom and Ike Night first! Ribs with a side of childhood trauma!) I tried to reassure him that no no no, I just went over a curb, it happens, the minivan's been through worse, everything is fine, fine, fine.

(Narrator Voice: Everything was not fine.) 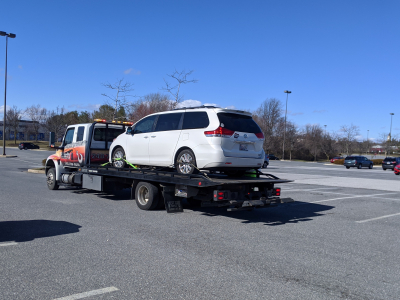 I managed to damage the sidewall on not one, but BOTH passenger side tires. They were flat and the minivan was noticeably leaning by the time we pulled into the parking just a few minutes after impact.

We went to Michael's as planned and took a Lyft home, as I decided I'd rather deal with a tow truck in the light of day and not in the rain -- and definitely not with a small child for whom this is was all Terribly Scary and Anxiety Inducing and who keeps re-telling the story to everyone as The Time Mom Got Into A Car Crash And Almost Killed Us All. (I also bought him literally everything and anything he wanted at Michael's but he keeps leaving that part out.)

The car was due for some new tires anyway, and y'all know how much Jason loves buying tires, so that's been taken care of. It might be a little while before Ike trusts me behind the wheel however. I picked him and Ezra up from an afterschool program yesterday in Jason's car and I've never seen him get his seatbelt buckled so quickly.

"WATCH OUT FOR CURBS, OKAY?" he commanded.

The good news is that the experience did not diminish his excitement and commitment to Mom and Ike Night, as I discovered today that he's already marked our next one on his calendar. 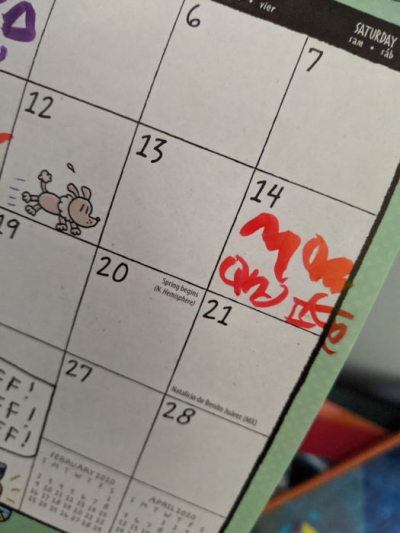 I have ONE time ran out of gas with my oldest in the car, and my husband and then-youngest (age 3) had to come "rescue" us with the gas can. The three year old has NEVER let me live it down. He hopes I didn't forget to put gas in the car aloud at least once a week. Glad you guys are ok!

I did that on the way home from the grocery store, thankfully without my children, but with my double stroller so I called the tow truck and then walked a half mile home pushing a stroller full of groceries. Well, hello neighbors! It is I, your neighborhood crazy lady! My husband did say that our car probably needed new tires before winter anyway before later trying to give me shit about having to pay for new tires. I may have a terrible memory, but THAT I would not forget.

I did this a few years ago with my cat in the car. It was during the day and I do know how to change a tire, but I couldn’t get the damn lug nuts off! So we waited for a tow for awhile. I let my kitty out of his carrier and let him explore the car. I got some great pics of him! A nice man eventually stopped and helped me with the tires before the tow truck got to us. Had it been raining and dark I would have been way less chill about it all.

As much as I love driving and do it all the time on my own, when I'm with Hubs he usually drives. Which is why the ONE morning when I was new to our area and I drove to the coffee place of course upon taking the turn I got blinded by the sun and did not know there was a weird island with a sign on it (telling you to go around the island of course) so I go where I think the road should be based on the car waiting at the light going the opposite direction and boom I hit the island and drive right through the sign and pop two tires cause yanno metal vs rubber = metal wins. My child - who is now 20 and wasn't even in the car at the time! - STILL will not let me live it down. Kids.....(thankfully hubs was with me and knows it was a legit accident so he gives me no grief - also why do men like buying tires so much??? he had picked out the fancy new ones he wanted me to have before the tow truck even got there!)

I did this myself last fall--with a brand new tire, however. I was so mad at myself for such a dipshit move, with the added bonus of my husband being out of the country at the time. On the bright side, it was in my work parking lot. A very nice friend changed the tire and my husband dealt with it when he got home, who has not once brought it up since, bless him.

My daughter won't let me forget about the time last summer I backed Grandma's van into a tree at the state park. State parks are kind of tight spaces and I'm more used to driving my Civic so I misjudged and also didn't see that I was quite that close to said tree. It caused a big dent in the tailgate and caused the back window to shatter. I mean, it's all fixed now and I paid for my Mom's window but the little miss just HAS to make sure to watch for stuff behind me now. (Eyeroll even though I actually also backed my Civic into a light pole in a small parking lot downtown, but we don't need to talk about that.)

We didn't turn my daughter forward facing until she was 5 and as soon as we did, she started criticizing the status of my gas gauge. "Do we have enough to get to the gas station?" I haven't run out of gas since I was 16, thank you very much, child, and watch it or we can still turn you back around.