The Greatest Thrift of All

I recently attempted a closet purge. (And by “recently” I mean “my closet barfed all over my bedroom floor and I’ve only cleaned up half of it.”) I’ve known for awhile that I was developing a Fast Fashion problem, and then Jane Fonda announced she would never buy new clothes again and showed up at the Oscars in an “old” dress looking like honest-to-god FIRE, I thought, “YES I TOO SHALL BE A SUSTAINABLE QUEEN! I TOO COULD HAVE A DRESS LIKE THAT IN THE BACK OF MY CLOSET AND WOULDN’T EVEN KNOW IT!”

So far, such a dress has not emerged, but I realized I wasn’t “developing” a Fast Fashion problem. I had one.

So many Target impulse buys! So many cheap graphic tees and black cotton tank tops! So many things I bought online and didn’t end up loving but was too lazy to return! So many things I’m holding onto for no real reason other than a weird wardrobe form of FOMO.

(Like, I found a dress that I guess I could wear to Da Club? But I don’t go to Da Club? I don’t even know where Da Club is? And yet…WHAT WOULD I WEAR TO DA CLUB???)

And I found so much stuff that’s just…crap: I have a whole stack of not-that-old clothing with holes, mysterious stains, bleeding/fading dyes, shrunk from the wash, etc. Because of course it didn’t last. Because it was yet another $10 black tank top that some poor human being probably got paid a few pennies to make, and now it’s not even nice enough to donate.

(We went cold turkey on paper towels a few months ago, so at least I can convert that pile to kitchen rags. But still!)

I know this is probably a strange prologue to a post about clothes shopping, but the whole exercise taught me that I need to be a much more mindful shopper. (Since yeah, I’m still gonna buy new clothes every now and then. Sorry, Jane.) Stop impulse-grabbing t-shirts on my way to the toothpaste aisle! Don’t buy something because whee! It’s cheap and fun! when a few minutes of thought will reveal I have absolutely no need for it!

Buy things that fit, that I actually need and will wear regularly, and that will last longer than my washer’s spin cycle.

And also, whenever possible, buy things secondhand. Did you know that humans trash 26 billion pounds of clothing a year? Looking around my bedroom, I can unfortunately believe that, and I would very much like to remove myself from that statistic.

But I HIGHLY DOUBT all 26 billion pounds of clothes are actually unwearable. Which is why I think thredUP is frankly, totally awesome. (You know all about thredUP by now, right?? The largest online thrift store? Carries just about every brand on earth for up to 90% off estimated retail? Literally thousands of new items are added every single day? Right. That thredUP.)

So, with the lessons learned (and wardrobe gaps) from my closet purge in mind, I went on a little thrifting spree. Before I started shopping, however, I MADE A LIST.

I also made a note to think about full outfits, and making sure stuff went with other stuff in both my shopping cart and closet.

Of course, I found all three of my non-essential list items almost IMMEDIATELY. 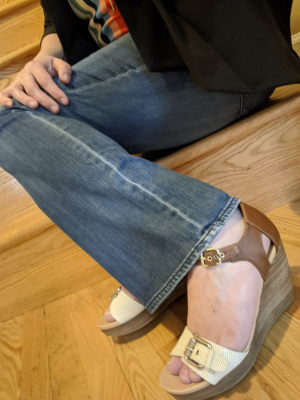 Tangent! So one night I’m watching The Good Place and Kristen Bell wore a really cute, striped camp-style shirt. I liked that shirt a lot! Later I saw something sort-of-like-it-but-not-really at Target on my way to buy cold medicine. I bought it. SPOILER ALERT. I did not look like Kristen Bell. 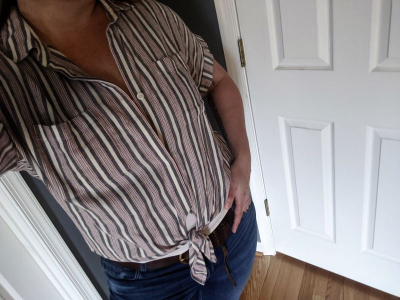 thredUP has a couple cool browsing features I use a lot – first, after you find something you totally love, you can see all the other items that came from the same seller, which are likely to be your size and maybe similar to your tastes. That’s how I bounced from the Dr. Scholl’s wedges to this delightful non-black rainbow tank top from Socialite ($10.40 vs. $27). 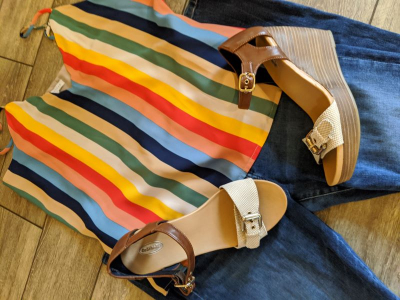 But it’s still too cold for tank tops! That top would look super cute with a black blazer, though.

Second, if you find something you like but maybe don’t love, you can select “SHOP SIMILAR” and see a ton of similar items and styles from different brands. So once I found a casual black blazer that was almost perfect, but not quite, I asked to see similar items and got more refined results. And lo, and behold, the Perfect Black Blazer is mine. 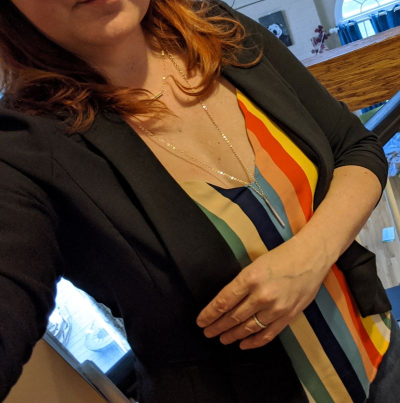 It’s from Maurices (and cost $21.60 vs. $54), which is a brand I wasn’t familiar with and likely wouldn’t have searched for. But now it’s my new favorite thing.

Next up, a tote. This was a tall order because I have looking for a tote for probably six months now. (Seriously, tote bag ads follow me around the Internet. NONE OF THEM ARE RIGHT.) I feel like, once upon a time, I saw someone carrying a really simple, versatile tote and thought, “That is a really great tote. I should get one like that!” But I have only a hazy memory of what made the tote so perfect. It was a brownish-blackish area, with handles. 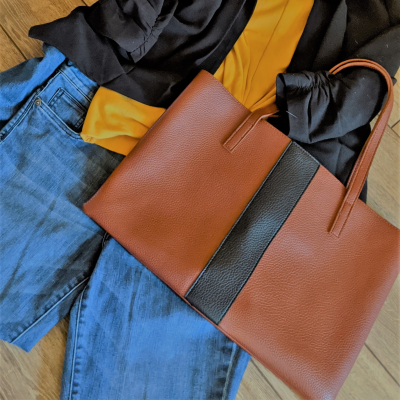 FOUND IT. It was this Vince Camuto tote. Not too big, not too small, no extra frippery, pairs well with both brown shoes and black blazers. Cost $33 and is like-new condition. Was originally $128 (and I have since found other used ones for sale on other sites for $98).

Now, thredUP gave me a shopping allowance for this post. I admittedly went a little over. $72.25 over. But these are why: 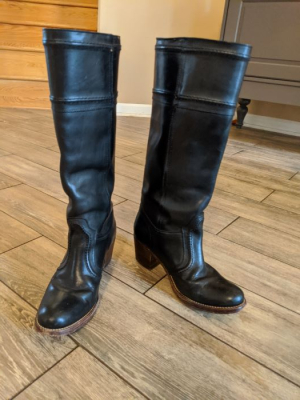 Now, if you are fortunate enough to own a pair of Frye boots, you know what a screamingly good deal that is. These are $350+ boots.

So I was a little suspicious. What was wrong with them? thredUP said the boots were deeply discounted because of “scuffs.” Which..okay? I maybe spend another $15 at the shoe repair place? They’re FRYE. They’ll be FINE.

(I actually own two pairs of Fryes. I bought one pair in my 20s and another pair in my 30s. I wear them pretty much non-stop in the fall and winter. These boots last forever, people.)

I took them out of the box and examined them closely. No scuffs. No defects. In fact, judging from lack of wear on the soles and the fact that the leather isn’t even fully broken in yet, I’d guess that these boots were only worn a couple of times, if at all. 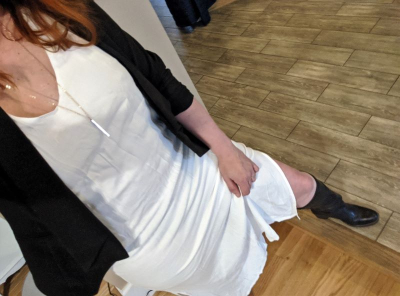 AND NOW THEY ARE MINE. AND MAN THEY ARE COMFY.

And okay, a new dress wasn’t on my list. But once I came across this white flowy Love, Peace & Boho dress (new with tags! $13.60!) and pictured it paired with the boots and the blazer and some long necklaces I knew I needed to buy it, lest I spend the next six months trying in vain to find something similar.

(You gotta give me one tiny little impulse buy, right?)

Feel free to totally one-up me in the comments with the story of your greatest thrifting/secondhand find.

Thanks so much to thredUP for letting me shop and for sponsoring this post. And now! The first 100 readers to use the code AMALAH will get an extra 30% off their first thredUP order (terms apply). Click here to shop!

I just got that exact same tote in my fab fit fun box. I kid you not.

I just sent ThredUp a big polka dot bag full of stuff, and my closet purging will probably result in at least one more bag in the coming weeks. Lots of "almost fits" and "4 items in my Stitch Fix are keepers, so this thing is practically free because of the discount" and "super cute on the size S model, but less so on my XL bod." I hope the items that departed my closet can make someone else feel good.

I took a bunch of my fat clothes to a resale place and got enough credit to get the most badass pale pink. Moto jacket. It has tons of shiny silver Zippers and I love it!

I made my new year's resolution (which I don't normally make) to not buy any new clothes this year because global warming and fast fashion and seriously, I go to preschool drop off, the playground, and the grocery store. But was really only able to pull the trigger because you'd told me about thredUP and I'd had good luck there already, so I knew I could go without new clothes and not have to actually go to a thrift store. I got a brand new cocktail dress for my husband's work holiday party for $20 and boots I've been wearing all winter that also said they were scuffed and also looked perfect. They aren't Frye though and that was a while back, so I did go search Frye before coming to leave this comment, just in case they had the perfect size 9.5 boots and someone else went and snatched them up in the time it took me to blather on.

Maurices is the BEST! We have one in my town in Nova Scotia, and I believe their plan is to start in smaller cities and then move to the big ones. Amazing, amazing clothes. (Also that rainbow tank top is EVERYTHING.)

if you haven’t already, try Poshmark as well! You can also make offers on clothes, or if you like an item the seller may offer a discount to get you to buy it

I love ThredUP and am wearing a J Crew sweater from there right now. Also their app gives you points for things like just opening the app, and the points are good for discounts. Apparently I open the app a lot, and now it will be one more time because I am easily suggestible.

My personal favorite thrift is a pair of greyish tan, never-worn suede Birkenstock clogs for $8 that retail for $145. I shed a little tear in the store and ran to the register!

I have those Frye boots (I believe they are the Jane) and love them so much! I got them on a crazy discount on Amazon and was way proud of myself, but you totally beat me!

Once upon a time, I requested a giant, polka dotted, closet clean-out bag from ThredUp. When it arrived I proceeded to stuff it to the absolute max with clothes, shoes, and accessories. Then I sent it off, so excited to be helping the planet and getting myself some credit for cute new clothes. I got $3.19. Couldn’t even buy myself one single thing. Adios ThredUp. 😕😕

That's no joke about Frye boots. My dad has a pair that he's had since HE was in his 20s (he's 60 now) and they're still in amazing shape. I mean, I don't think he actually wears them anymore ... but he could, is the point. That is an AMAZING deal. I would have left the price tag on just so when people commented on them you could be like "I know! And they were only $76!"

I think your new attitude towards clothes shopping is wonderful and responsible. I've recently had a similar epiphany. I have a toddler who needs new clothes every six months so I've decided all her everyday, daycare clothes will be second hand and for weekends I'll buy a few pieces from small shops, made in Canada (I'm Canadian), quality pieces that will have a second life after she's done with them. For me, I'm going to try to just not buy anything new because I have sooo much clothes, which actually makes deciding what to wear in the morning harder.