The Life-Changing Magic of the Right Goddamn Medicine

When Ezra was in third grade, I sat at a parent-teacher conference and listened to a teacher describe him as smart, but kind of lazy. His desk and backpack were a mess, he could never seem to find the right folder or worksheet, his homework was occasionally lost or late.

She asked us about his nervous tic -- hands tightly clasped together, brought up to his mouth, then a strange tensing up of his entire body followed by a sharp intake of breath and a small shuddering shake/rattle. It started in kindergarten, we told her. He says it's just because he's excited. We figured he'd just outgrow it at some point, but it hadn't happened yet.

When Ezra was in fourth grade, his teacher described him -- a little more generously this time -- as a daydreamer who required frequent reminders to stay on task or pay attention. He got B's and C's on his report card, and was overall a pretty average student.

He tried the violin, and then cricket, quitting both in fairly short order. He began complaining that he didn't have any friends, that no one wanted to play with him at recess, and he stopped joining the kids in the neighborhood outside after school.

Instead, he sat for hours at our dining room table agonizing over his homework. A five-question math worksheet took him at least 30 minutes. A simple writing assignment of three to five sentences took even longer, and his handwriting was borderline illegible. Tests and assignments came home with notes from teachers that they literally could not read his answers and had to mark them as incorrect. "SLOW DOWN :)" was a comment I saw a lot.

But he was a good kid. A well-behaved kid. A quiet kid who never, ever got in trouble, except for getting caught once or twice reading a book during classes instead of listening to the teacher. He LOVED books. DEVOURED books. He smuggled books out to the playground to read at recess, which technically isn't allowed but the playground monitors would sometimes give him a pass, because he was so polite and serious. He also seemed pretty lonely without his books.

He got straight A's on his most recent report card and made the honor roll. He never has homework anymore because he finishes it at school. If he has a big project due on Friday he starts it on Monday, preferring to get it finished by Wednesday so he has time to proofread and make final changes on Thursday.  He joined the safety patrol, a young authors club and delivers the morning announcements. His teachers have nothing but praise and good things to say about him. He's a joy, a delight, such a great kid to have in class.

He decided on his own to audition for the county's GT/Honors Band and -- while he didn't make it -- he came pretty close, surprising his band director and flute teacher, who both admitted they had no idea what he was actually capable of playing. He's now in the school's most advanced ensemble and his teacher skipped him ahead to a more challenging book. He loves it. His confidence has skyrocketed.

His handwriting is impeccable. He prefers to write in cursive, because it's fancier. Sometimes I pull out cards and letters he wrote for me just last year, just to blow my own mind a little bit.

He befriended a blind student and they're now inseparable at recess, telling each other jokes while hanging from the monkey bars. Ezra protects and guides him in crowded hallways and helps him in anyway he can. The boy's aide sends notes and small prizes home with Ezra as a thank you, but of course he's not doing any of it for prizes or praise. He's just happy to have a friend again.

I can tell when his medicine wears off because that's the only time I see the tic. He does it to snap himself into focus, to clear out the noise and the tension that builds up in his brain and his body.

"I didn't know how to describe ADHD," he told me. "So I just called it being excited. I thought I was just more excited than everybody else, and like, all the time."

Yesterday, we got a letter from the school district, recommending that -- based on his latest round of testing -- Ezra should be placed in the Gifted & Talented program.

I know I should probably say some Classic Mom thing here, like how I'm totally not surprised or how I always knew he had it him.

This year has simply been a revelation. for both of us. 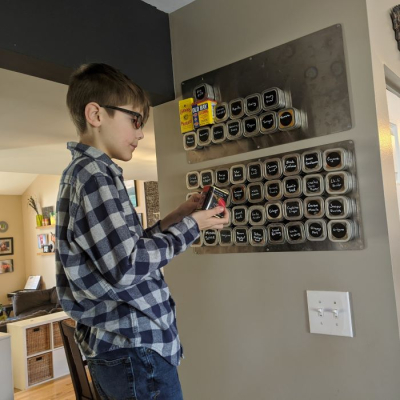 Was Ezra on different medication in the past? My son is taking Ritalin right now for his ADHD diagnosis, it helps with the HD part but not the AD part at all. He's similar to Ezra in that books are his favorite thing ever but his schoolwork is terrible. It's like he can't stop his brain long enough to focus, even though he's sitting there relatively quietly. I'm wondering if I should ask his doctor about Vyvanse.

Oh man, I hear this so much. My son started Vyvanse in grade 8 after a whole lot of hand-wringing by his father and I about whether we should "drug" our son. (Insert terrible mom guilt for not starting way sooner.) It's been nothing short of life-changing for him and I'm so grateful to have been given the option.

@Melissa Ezra was first diagnosed in third grade, given Vyvanse but was completely unable to swallow a pill. He tongued the meds for a few weeks and I later found them in his laundry hamper.

Meanwhile, his teacher (the "he's lazy" one, who was already not my favorite) filled out new assessment forms that were like, "he's cured! Totally can pay attention now! It's all great!"

We decided to drop the idea of medication. I wish we hadn't, but we did. Vyvanse was the first one he's ACTUALLY taken and it works great for him. (And me. And Noah.) Noah tried a few meds before we found the one that worked.

This made my eyes leak. I am so happy for the Mighty Zah.

So much of this sounds exactly like me when I was a kid, and so much of what you post about you sounds so much like me, now. I've been on anti-depressants so much of my life and they help.... I guess... sometimes. But how do I know I'm not just sad and lazy? Like I look at the assessment form and maybe, I dunno. If I get a doctor to prescribe something, what happens if it's the wrong thing? It would be nice for once in 50 years to feel productive and not depressed that life is just too much.

Ditto on the leaky eyes. Happy for you and Ezra.

Sounds so much like my niece. She’s super smart, but absentminded, messy, always forgetting her homework or assignments, and had anxiety and tics. But she’s quiet and well behaved. She was diagnosed with adhd this year and put on meds. And she’s gotten much more organized and less ticcy. Less messy too. Also started playing bass in the school orchestra and loves it!

Huh... I read your ADHD in girls post and thought a bit about my almost ten year old. And today I kept her home for a mental health day, because she just needed a frickin break so she could get to the end of the day without crying. Except, I let her go to piano lesson and the choice between candy or popcorn for a job well done reduced her to tears. She's a great student, but still needs so much support scheduling out tasks. And so often seems overwhelmed. And, you know, I think I'm going to print out an ADHD checklist and schedule a conversation with her teacher...

The Mighty Zah! And on top of it all, he cooks! I don't know if he does as much anymore, but he still knows how. I can't wait until he's President.

@Melissa, I'm seeing the same thing in my daughter. She's 13 and been on Ritalin for almost 4 years. At first it worked great, but now it barely seems to do anything. She's in a tiny private school with a LOT of help, but she's still falling behind on school work. She's never been hyperactive, but has zero executive functioning skills. Like....none.

So we all know that Mighty Zah is my favorite of your kids! It made MY eyes leaky when I read that he is doing so well. That ALL of you are doing so well.

It’s amazing what the right med can do! Also isn’t it nuts that first so many of us feel so guilty about medicating our kids, and then later we feel guilty about not medicating them sooner?

Crying. My daughter and The Mighty Zah are almost exactly the same age (I found your blog while on maternity leave, just before Ezra was born). My daughter is severely dyslexic, mildly ADHD, and gifted. We actually "lucked out" with the dyslexia, which was so severe that she was flagged in kindergarten by her Montessori teachers, and we had her tested. The ADHD was a surprise that came along with that testing. She'd been mostly doing just fine in Montessori, but this year for 5th we switched her to a more typical school and ended up also putter her on a low dose of Vyvanse. She's getting A's, doing running crew and costumes for the school musical, and getting unending praise from her teachers for her hardwork and focus. I am so happy and yes, proud, of Ezra (weird, I know, to be proud of a kid I've never met, but there we are--thank you for letting us be virtually part of your life). These kids are alright.

I'm actually getting the ADHD assessment forms back from my 4th grader's teachers today so we can get started on figuring out how to help my girl. She ticks so many of the boxes, but the only "hyperactive" part of her is her mouth. She never stops talking and honestly doesn't seem to be able to control it. My concern with medication is the appetite suppression I heard can happen with some meds. Have you found that to be the case with your kiddos? My kids is skinny as a rail and barely eats enough to sustain her. Though her lack of focus may have something to do with that too...
Anyway, I'm very happy to hear you guys are both seeing positive results!

Oh gosh, I'm so sorry Ezra struggled. And I'm really happy for him that he is doing so well now. I am a freelance tuutor of English language and work with children a lot. It is difficult to watch a child struggle. Thankfully, I can help them, I don't think I have met a child who'd need additional help (assessments, recommendations, medicine, the whole process). Or I don't know because I'm not told. Anyhow, what I want to say is that it is increadibly rewarding (and a relief) to see a child progress and even strive. Best feeling ever.

Sent this to my husband and he finally agreed that we need to see the doctor with our son. His appt is made. Thank you. <3

This post is an incredible salve to a mom of an anxiety/depression/ADHD - kid.

I love that Ezra is doing so well. He always seemed to be an extraordinary kid. It's awesome that he's gifted and talented on top of it.