Not really a full post today but more of an addendum to yesterday's, since a lot of y'all seemed to appreciate the book and Positivity Jar recommendations.

(Which, for the record, both came from Ike's private therapist, who is just wonderful. [AND ACCEPTS OUR INSURANCE WOOOOOO.] We -- okay, technically Jason, because he's even more On It than I am sometimes--  found someone who does Cognitive Behavioral Therapy AND who understands the connection between learning disabilities and the resulting depression and social anxiety that frequently come along with them. Her input helped shape Ike's IEP and the school's plan, so if you're kind of flailing around with this stuff as well, it really helps to have someone like that on your child's team. Ping me if you're local and need a recommendation.)

Wow, went on a TANGENT!! after just one sentence there. Anyway! Ever since hitting the publish button I've been like OH WAIT AND ANOTHER THING, and since I'm too lazy to go back and edit an existing post I figured I'd just write a new one. This is personal blogging. We don't edit things!  We just go on and on and on forever about the things.

A WEIGHTED BLANKET: Sleep was a real issue for awhile there. Ike could typically fall asleep okay on his own, but was perpetually worried that he might not. (He takes a kids' melatonin gummy every night to soothe that particular anxiety.) But then he'd consistently wake up at some point in the middle of the night and come to our room in near hysterics about not being able to get back to sleep. He'd eventually fall asleep in our bed, which of course led to lousy sleep for me and Jason. Ahh! FIX IT!

His therapist (again) recommended a weighted blanket and I had a total forehead-slap moment, because Noah's used one since he was around Ike's age. Duh! Why didn't I think of that? PROBABLY BECAUSE WE'RE ALL COMPLETELY SLEEP DEPRIVED.

Noah struggled with insomnia and some anxiety in third grade, but they turned out to be side effects of the first ADHD medication we tried (Concerta). We switched him to Vyvanse and the insomnia and anxiety went away almost immediately, but his "Magic Blanket" was here to stay. He still loves it, even though the cover ripped off and it's pill-y and old and probably 10 kinds of disgusting. (I keep offering to replace it but I think there's a small emotional attachment to the raggy-ass thing.)

Noah's blanket is 15 pounds, which was pretty heavy for him when we first got it, but since he's autistic he really craved the deepest pressure possible. For Ike, a twin-size, 12-pound blanket is absolute heaven, keeps him asleep all night long, and the look on his face when we tuck him in at night is *chef's kiss*.

HAPPY RIGHT NOW: Another kids' book recommendation. A few of you mentioned the CBT principle that sometimes we all have to really choose to be happy, or choose to shift our focus away from the negativity and what-ifs and the "but thennnns." That's this book! That's this book exactly. It's sweet and positive but also acknowledges that yeah, sometimes you're not happy and the worry monkey won't leave you alone and that's okay too; here are some ideas to get back to "happy right now."

THE DYSLEXIC ADVANTAGE: A book recommendation for parents. You know I've never been the sort who sees any of my children's neurological differences as the thing that needs to be "fixed" or "cured" or "disciplined out of 'em." I will like, honestly fight you if you try to suggest otherwise. ASD, ADHD, dyslexia, etc. are simply part of who they are, as people. And it's up to me as their parent to figure out how to support them and help them reach their potential and live happy-right-now fulfilled lives as good human beings and blah blah blah. (You know, just like I would if I was parenting all neurotypical children. What a concept!)

Right now Ike 100% sees his dyslexia as a negative, as a Big Problem That Will Never Be Solved and a constant source of frustration and feelings of "other-ness" from his peers. This book is really helping me fight back against that perception and hopefully get him closer to the more positive "Dyslexia Is My Superpower" mindset.

(We just got some of Ike's standardized testing results in the mail yesterday, and he scored 8 points shy of qualifying for the Gifted & Talented Math program. And that's without qualifying for ANY testing accommodations this year. That kid is so freaking smart and one day he's going to realize it and then we'll all be sorry.)

(And by "sorry" I mean "so incredibly proud of him because he's always been amazing.") 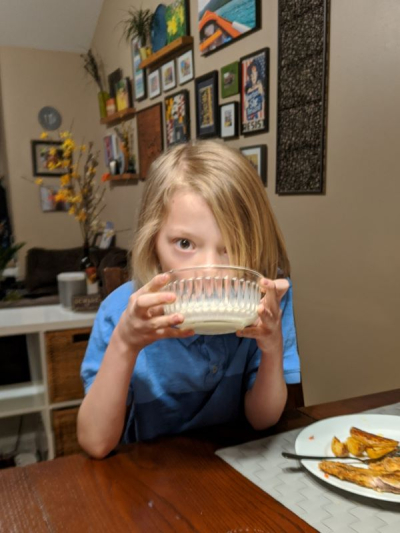 "You know you can fit more milk in a bowl than a cup, Mom."

My Dad and my kid Brother (well, he’s in his mid 20s but is still a kid to me) are both dyslexic.

My dad, despite having no support or resources went onto become a successful pediatrician and my brother is an electrical engineer. I know there’s a book or list of famous dyslexic people (including Walt Disney!) somewhere out there and it really helped my brother when he was feeling down about it.

You’re doing all the right things and I love reading your columns.

I don't know if Ike will appreciate this, but our neighbor was recently diagnosed with dyslexia at age 8, at which point she told us the best dyslexia joke (at least for not involving bodily noises...) Her dad kept trying to teach her right from left by holding out her thumb on both her hands, and on the left hand it makes an 'L'. But now she just gets to say back to him, "Daa-aaad, I'm dyslexic..."

ALL of your kids are amazing.
I expect to be reading about something or another that they have done when they get bigger (not saying grow up because I refuse to do that!) that makes them world famous.

Would love the therapist's name, if you're willing. I'm in Baltimore City but willing to drive. Melissa dot 21218 at gmail

My middle child took the news of her dyslexia really hard as well and its been a struggle as just the label has caused her to be treated differently and discounted at school (whole other issue right there) but every time she starts hating on herself and wishing it away we start Googling awesome famous people who are dyslexic and I remind her that she is so lucky that she got the fancy brain that refuses to think inside the box they keep trying to force her into and can see things in ways the rest of us dont get to. It takes a lot of reminding but it does seem to help. I think I'll be ordering that book as well.