All the Small Things

I'm happy to report that our school has really stepped up quite admirably in response to Ike's most recent struggles. I'm sad, of course, that he's having all these struggles in the first place. It's heartbreaking to watch your happiest, bubbliest child suddenly close up and fold into himself, unable to look out at the world without a lens of suspicion and anxiety.

We're on it, though, and so is our school. One of (several) services Ike now receives is a "stress reduction and mindfulness" small group that meets once a week and is run by the school counseling department.

(All the third graders were asked to rank and rate their stress levels. Anyone who rated themselves as REALLY STRESSED THE FUCK OUT was invited to join the group. Turns out Ike has plenty of company there.)

At the most recent meeting, they were asked to draw where they physically feel stress, and to describe what it felt like. This was Ike's: 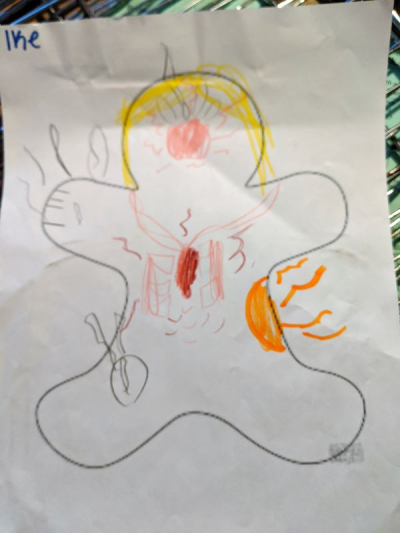 (I asked him if I could share all of this, by the way, and he said yes. He also gets to clear any photos I post, but usually makes his selection by deciding which one will "get all the likes on Facebook." Oh, no.)

Anyway, let me annotate and explain: 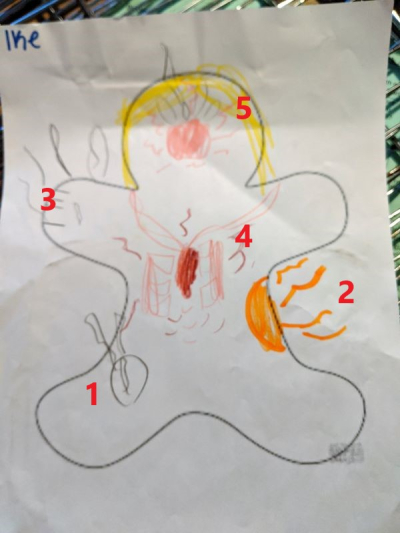 1) "That's the scar on my knee from when I fell down when I was two. I still feel it sometimes."

3) "That's this." - shows me the faintest sliver of a scab from a paper cut

4) "That's my lungs. When I get stressed they feel tight and burn-y."

5) "My brain. It just hurts really bad at school and I can't pay attention and there's too much going on."

(Yes, Ike was very recently evaluated for ADHD, along with many, many other things. Depression and social anxiety came back highly elevated, while multiple ADHD scales did not. So. I don't know? We're still keeping an eye on it, as it clearly runs gallops in the family?)

He's very preoccupied with what other kids think of him, and unfortunately tends to assume that they're always thinking something negative, despite all evidence to the contrary. (He has lots of friends! More friends that I have, honestly! Our doorbell rings almost constantly with "Can Ike come out and play?" requests!) When something good or fun happens, he manages to always and immediately find something negative to fixate on instead.

Again, we're on it, but it's not exactly the easiest thing to just "fix." 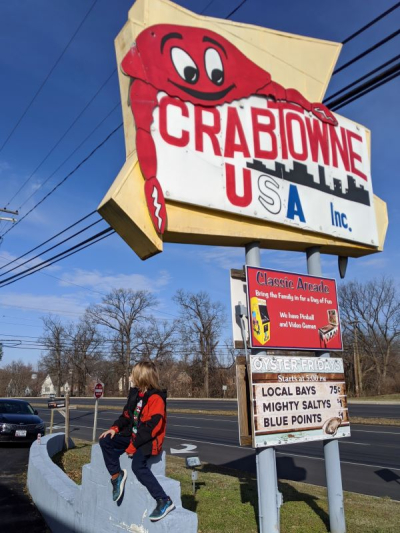 Two small things that seem to be helping: This book, A Little Spot of Confidence, combined with one of us dutifully marking the back of his hand with a real-life "confidence spot" in orange marker after we finish reading it.

He also created a "positivity jar," and every day we write down one good thing that happened to him, or one happy memory he made. On Fridays, we dump it out and re-read all of them, with none the usual "yeah, but thennnn...." caveats he tends to add.

I wish there was more, I wish I could just...insert Kenan Thompson yelling FIX IT!! on SNL... FIX IT! But small things are what we have right now, and hopefully, they'll start to add up.

"Make sure you put RIBS!!! in all capital letters, okay?"

SURE THING, KIDDO. ALL CAPS IS MAH SIGNATURE COLOR.

I’m so sorry to hear Ike is struggling. We were dealing with some similar negativity (depression/anxiety type stuff) with our third grader and we did a 12 week stint of cognitive behavioral therapy that really helped. We are in Boston so I don’t have a recommendation near you, but just thought I would throw it out there in case it’s something you haven’t tried. Big hugs to you and Ike.

Thank you for sharing. My 11 year old has ongoing anxiety (I wrote you about nightmares on the Advice Smackdown back when he was 5! Guess what, that was a harbinger of things to come!) and this school year he's started becoming very depressed, negative, and is isolating himself from his peers. I FEEL you on the 'tell me what the problem is so I can FIX IT'. So much. I will definitely check out that book and see of I can get him on board on the positivity jar. The other thing that your post really underlined for me is that we haven't done any type of formal assessment, which might be helpful, will be following up with his therapist and possibly school on that. His therapist put us onto Keri Smith's wreck this journal which he seems to be connecting with so that may be another tool in your tool box if you think Ike would be into it. Just want to say keep sharing the small things because you're helping all of us out here!

My children's struggles are, in some ways, so much harder than my own, because I want SO MUCH to fix it, and feel quite acutely how powerless I am in their rapidly expanding lives. You are doing so good -- I love how you are coming up with solutions that work for him, while working with many teams of professionals to come up with other solutions.

I just wanted to say thank you so much for writing about this. It helps so much with my own kids and their struggles - what is normal, what is not? What should I bring up with our Dr? I'm grateful for the book recommendations you share too. Thank you. <3

Sounds like you are in the weird, wonderful limbo of “Yay! Help is coming! But still other things??”

My high-strung 10 yo was diagnosed with migraines last year and we’ve gotten good help from our pediatric neurologist. Apparently, the pain of most kid migraines lasts less than 60 seconds but the aura (sensitivity to light, noise, activity, etc) extends around that time. I thought of that only because of Ike’s painful head drawing.

Sending good vibes your way: for clear answers and good solutions for all of you

My biggest fears as a parent are that my mental health struggles will make me a bad mom, and/or that I will pass on my illnesses and not be able to help enough. It's so hard to think I might pass my battles on to the person I love the most in the world, and I image that's a struggle for you too, Amy. But damn, if I can handle things like you are, it'll be okay. Ike is blessed to have you to help him though the minefield. Way to go!

Waving to Ike from the depression/anxiety field. Years ago, a mentor shared a very small thing with me that has ended up having a huge impact. She reminded me that I am a kind person. She suggested that I specifically put words around positive thought/compliments about other people in my head. I didn't have to say them out loud. I just could explicitly think, "Hey, that's a really good color on that woman across the bus aisle."

It was so small. She gave the context of just adding a touch of positivity to the universe as I went through my day.

What I did not expect what an enormous impact it would have on my own self-talk. I have no idea how it works, but those little bits of positivity have been very effective in derailing my own negative self-talk. It's not a cure, but it has helped tremendously.

So glad he has awesome parents who are on it for him. Similar to DeNae's post, it helps in our house to talk openly about how it's a CHOICE to say or think or do something negative vs positive. Thoughts, obviously, being the hardest to catch. It seems to help acknowledge that all this isn't just happening to oneself, but is somewhat created (due to all sorts of things that may or may not be controllable). But just a little nudge of it doesn't have to be like this, seems to help a tiny bit.

Good luck, you guys got this.

@Tara Yes, Ike is also seeing a private therapist for CBT. It's been really helpful for him (and us). She's actually the one who lent us the Confidence Spot book and recommended the Positivity Jar exercise. We like her so much we've decided to have Ezra see her for a few sessions as well for HIS social anxiety. (Argh my poor children.)

Oh dear, hearing you describe Ike's social anxiety sounds like you are describing me! I'm going to start up my own positivity jar. I seriously am. And no "but then's" for me either!