I was about a third of the way through a new post for today when I realized it was kind of heavy/mildly depressing for a Friday afternoon. And nobody wants that on their Friday afternoon! Save that shit for first thing Monday morning, as the gods intended!

Instead, here's another thing that nobody wants or asked for. Boring, self-indulgent photos of my pets!

Finn and Rey and Fostercat finally seem to have settled into an aloof-yet-peaceful coexistence. I've been trying in vain to get a photo of all three of them together -- between the gray tabby, black cat and a big ol' orange tom, we've pretty much got the perfect moggie trifecta here -- but so far I've only managed to catch two of them at a time. 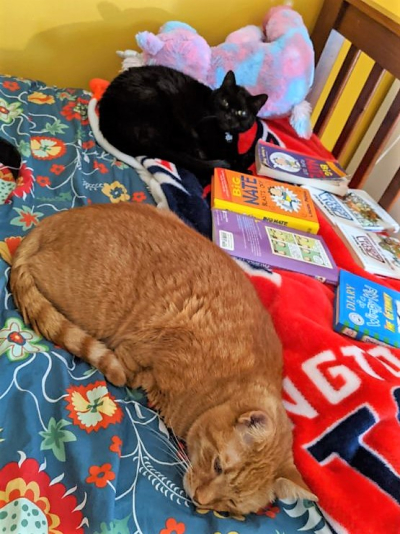 Tormund: "If I don't look at her, it's like she's not really there." 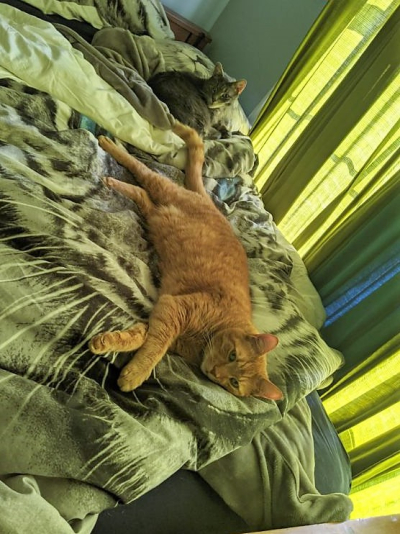 Tormund: "I will stretch alllllll the way out over this giant tiger face to assert my size dominance, even though I'm actually terrified of everything including vacuums, power cords, loud noises, my own tail sometimes, and honestly maybe a little bit of the cat behind me who is barely half my size." 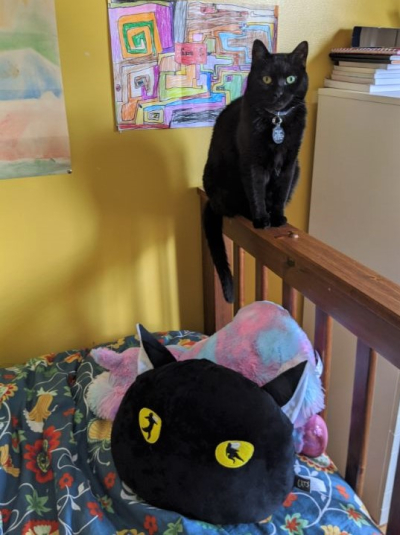 Rey the Pillow: "I REMEMBER, THE TIME I KNEW WHAT HAPPINESS WASSSSSS." 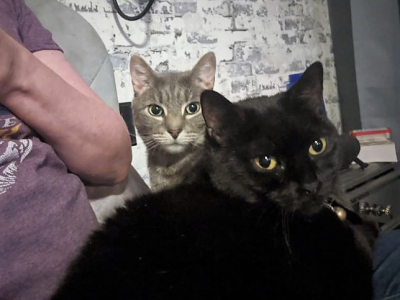 (No dumb caption here, just a friendly reminder that bonded pair cats are amazing cats and please don't overlook them in the shelter. You get twice the hijinks and yet somehow quadruple the chance of always having at least one cat on your lap at all times.) 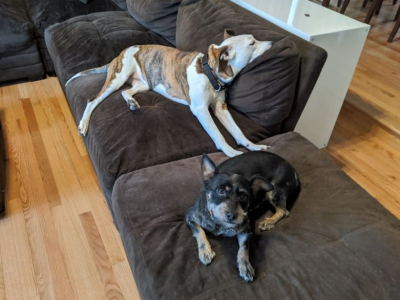 Meanwhile, it's even more impossible to get a photo of Beau or Poppy alone, because they are never more than one couch cushion apart.

(Except when Poppy wakes up and begs Beau to PLAY PLAY PLAY RUN RUN RUN. Which he does until she tires herself out, and then they plop back down on the couch and Beau gives me that look like, "See? I did good and got her back to sleep and kept her from eating the screen door again. I think that deserves a treat?")

And finally, here's Finn/Rey and Beau/Poppy, in brotherly human form: 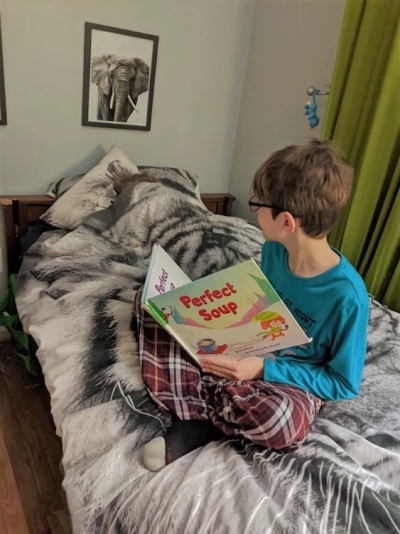 Yes, I think that's a better end for a very long week.

I want to hug all your animals!

Yes, sibling/bonded pairs are awesome. My plan was to look for a pair when it was time to rescue after one of my cats died last year, but only one kitten decided to hide in the engine of the car my husband was driving for work. So, solo kitty.

I love reading about your menagerie!
With bonus pick of Mighty ZAh reading to them!

I cannot get a photo of my kids with pets, all of them together would be dreamy.

We adopted a bonded pair of tuxedo kitty sisters 5 1/2 years ago, when they were 8 years old. We love them to pieces, but we laugh at how the shelter emphasized their bond. They rarely sleep on the same bed/couch and pretty much nightly lick each other's heads and/or butts until one cat smacks the other. We often find tufts of black fur scattered around the house. I'm not sure they could care less about one another.

I love the sweet photos and welcome a slightly depressing post, if it helps you to talk about it in any way ... hope all is well with you and your sweet family.

These pictures just make me feel so happy! I love animals! Thank you for sharing :)