The Dog Ate Our Stress-Baking

It's currently 10:34 a.m. and I have been listening to Ezra and Ike argue about what to name their island in Animal Crossing: New Horizons (a game they do not own) for over an hour and a half. Meanwhile, Noah's been watching YouTube videos about the technical specifications of every single version of the USS Enterprise for probably twice that time.

(There are 14 different versions, I learned today, along with many, many more facts than I ever wanted to learn about the USS Enterprise.)

So yeah, just another day in quarantine, slowly watching our brains morph into mush.

Just before noon on Saturday, I was briefly shocked to realize that it was almost noon, since Jason and I were still in bed watching Making the Cut.* I felt guilty, like, oh man, we need to get up and moving and go do...go...do...

Then I realized there was no end to that sentence.

On Sunday, Jason got up and made what was -- no exaggeration -- the greatest, most perfect batch of pancakes he's ever made in his illustrious pancake-making career. But then he left them stacked on a plate on the kitchen counter and went to watch Star Trek with Noah. When he returned to bag them up for freezing, every single pancake was gone and a certain dog was looking super guilty and extra...rotund in the belleh. 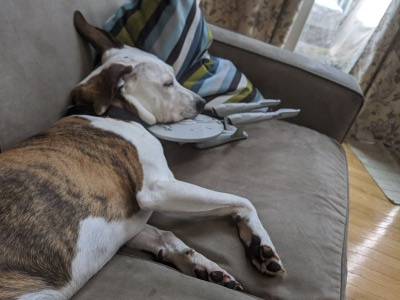 I didn't witness the crime because I was still upstairs in bed. Jason had brought me some coffee and a pancake, so once again there was no real reason to move for at least another six hours.

As of this morning, Maryland is fully shelter-in-place, which is honestly how we've been living for the last week. We've gotten just about everything and anything we needed delivered, and made just one trip to the Essential Business Store (formerly known as the liquor store) for curbside pickup.

But then Instacart threatened to strike and everybody panicked all over again, and grocery delivery windows are now the new toilet paper.

Amazon Prime and I keep playing the same cruel dance -- I fill up my cart, go to reserve a time and find none available. I try again later, see an available time, but Amazon has auto-removed at least half of my groceries, and in the 10 minutes it takes me to add milk and cheese and butter back into my cart, all the delivery times are gone.

I currently have a curbside pickup scheduled from a local grocery store, but not until Friday, and I figure if I can get half of what's in my cart I'll be lucky. So maybe I should actually just pounce on an Amazon Prime delivery with the half-empty cart anyway, and see if we can split the difference.

(And yes, I'm aware we're still allowed to go inside grocery stores and shop the old-fashioned way. But at this point during our state's outbreak curve [and with me likely needing to show up in-person and fully healthy for new-job stuff fairly soon], we'd...really rather not, if at all possible.)

Anyway. This sucks but we'll be fine, the inconveniences are all just that, inconvenient but nothing like being out there on the front lines while wearing the same resuable face mask for three days straight.**

*Y/N verdict: It's definitely not re-inventing Ye Olde Project Runway wheel or anything, but since we're not getting any new Great British Bake-Off or Queer Eye in this time of great crisis it's nice to have Tim Gunn back in our lives. Also I get the sense that instead of going for manufactured interpersonal drama, the producers have ordered everyone to pretend that they're all British bakers and BE NICE and KIND and HELP WHOEVER IS LOSING THEIR SHIT AT THE MOMENT.

(Naomi Campbell, on the other hand, is perfectly on-brand and delightfully, terrifyingly savage. Someone's getting a phone thrown at their head this season for sure.)

**True story. A friend stopped by for some sourdough starter this weekend and also all the pipe cleaners I could find in our kids' craft supply stash for her homemade face mask operation. Hey, does anybody remember what February was like? I've already mostly forgotten.

Wait, you're not ordering instacart today though, right? or amazon? Because they're striking.

Try Prime Now right after 12a Pacific / 3a Eastern; much of the larger datasets refresh at that time, so while it won’t be in the moment availability of humans to deliver, the in-stock and delivery to warehouse/store will be updated. And/or try when the Whole Foods servers refresh at 12a Central.

To commenter above; Amazon is not striking. Amazon is paying their wonderful amazing employees extra even amid closures (extra extra, like $15 is already min, most roles are $18-23, an extra $2 now, no limits on OT worked if someone wants extra time), allowing them all the time off with no repercussions and about double the paid time off as is typical. I work for an Amazon physical store group and we have all been working really hard to do the right thing for all our humans. I have connections at Instacart, I cannot vouch for how they are handling this.

Production factory is coming along nicely, thank you for the supplies!

Tell Noah that this Sunday is "First Contact Day" - in the Star Wars universe, this is a holiday that celebrates the day Vulcans and humans first met. Just looking for any possible way to differentiate the days over here...