The majority of our preparations for this...waves in the general direction of the entire goddamn country...were definitely mostly food related. 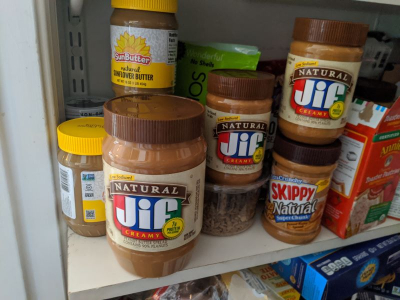 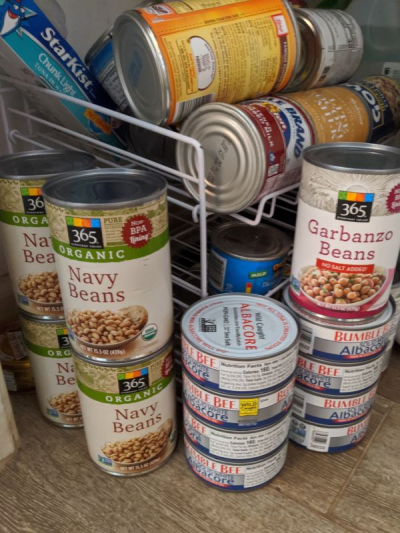 It's now Day Three and we have eaten exactly zero cans of beans or tuna, but OH MY GOD WE WERE NOT PREPARED FOR THE TOGETHERNESS. THE BRUTAL, TERRIBLE TOGETHERNESS. Five minutes after I took this photo they were shrieking at each other over...something. I don't know. I stop listening whenever I hear Ike's name dragged out into three or more syllables.

(Oh, all the wine hanging from that pretty dangling wine rack? Empty. Like my soul.)

All bars, restaurants, movie theaters and gyms were officially ordered to close by 5 p.m. on Monday. Social gatherings were slashed down to no more than 10 people. And while I'm certainly not mourning the loss of a gym I never planned to go to in the first place, the announcement added to the overall oppressive, claustrophobic mood of this whole thing.

We already knew we weren't going to see The Band's Visit this week, we assumed we missed our chance to take the kids to see Onward in the movie theater, but for some reason knowing that nope, can't even sit socially distanced from people to enjoy a nice cocktail or take Ike out for ribs or even grab a damn burrito at lunch and eat it somewhere that's not my house for the foreseeable future is really bumming us out. I know it's for the best and the safety of everybody but damn. Delivery and carry-out don't quite have the same mental break and refresh powers, you know?

Meanwhile, our dogs are eating Jake's leftover canned food because we neglected to make those preparations until it was entirely too late, the store shelves were empty, and Amazon was charging $61 plus shipping for a $30 bag of food.

(I found and ordered their food on Chewy, and every day since have received increasingly stressed and apologetic emails about why it's not here yet. It finally shipped this morning.)

I'm sure the dogs don't mind at all -- OH BEHOLD WHAT A GLORIOUS, FOUL-SMELLING GELATINOUS FEAST! -- but the kids all despise dealing with the canned food and we're sort of drowning in recyclables right now so I keep finding the empty cans dragged randomly around the house, or stuck on Rey's beautiful dumb head. 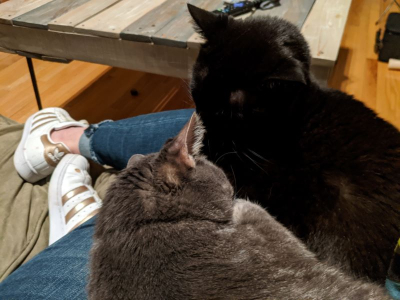 am NOT beautiful. am impossible-to-photograph void here to absorb ur body heat.

We do have plenty of cat litter, at least, so maybe I should warn the kids to properly ration our limited supply of toilet paper or else get used to crapping in a box.

We have 1/4 of a chocolate cake, three blueberry muffins and six granola bars* to go before I can stress-bake something else. I just don't know what to do with myself in the meantime.

(I realized after reading the comments that I missed a few recipe links on Monday. The cake recipe isn't online but is from Odette Williams' Simple Cake. The toaster pastries are like, a Whole Thing that require an entire post to explain. The granola bars are based on this recipe from Inspired Taste. I omit the almonds and dried fruit [nut-free for school and fruit-free for my picky children] and add about 1/2 cup of Cheerios, slightly crushed up with the bottom of a measuring cup. Pretty idiot-proof otherwise.)

(Except one time I tried to double the recipe and used a single 8 x 12 pan instead of two 8 x 8s and Rice Krispies instead of Cheerios. The texture came out all wrong and weird and the whole double batch was universally rejected. So. Idiot-proof unless you're this particular idiot.)

Posted at 01:29 PM in ANXIETYYYYY, when the world turned upside down | Permalink | Comments (11)

We are trying to finish one stress baked item before baking another ... but we have so much TIME to fill. And yes, the bickering. The endless, endless bickering.

Please keep providing us comic relief. My family of 5 (once my daughter flies home from college tomorrow) is already sick of each other. I’m starting to bake today. Apparently my apocalyptic response is to keep everyone fat or drunk.

Right before all this hit the fan, we made the decision to eat fewer sweets. The last time I went to the grocery store, I snagged two bags of all purpose flour even though I didn't really need any--because I had started baking a batch of bread a week and thought it would be nice to have some extra.

Well. Clearly I had some foresight, because when I asked my husband to pick up another bag, he came back with a $6 bag of self-rising flour, which I have never used in my life. He said it was literally all that was left, and he figured we could at least use it for pancakes. I Googled and made the most delicious Irish soda bread that was a hit. I suspect a lot of people are comfort-baking, or just stocking up so they can bake their own bread during the virupocalypse.

I've anxiously stocked up on baking supplies, and finally started baking today. I made an English muffin toasting bread and I'm waiting on homemade hamburger buns to rise before I bake them for tonight's dinner. My kids made rice crispy treats a couple of days ago, but that doesn't count as baking.
I panic-shopped today--I convinced myself I needed more flour--and was pleasantly surprised to find veggies and meat. And we desperately needed dog treats. There was one single bag of all-purpose flour left on the shelf, and no yeast to be found. Good thing I had an unopened jar on hand.
I'm seriously worried I'll run out of wine before this thing is over, and I will lose my mind. I'm living with two very unhappy college kids (they were both living away from home until last week), who are not feeling this. They're used to a lot more freedom, and they're mad that I'm putting my foot down and keeping them home.
Meanwhile, we'll all gain 20 pounds because I'm stress-baking every day. (And drinking all of the wine.)

I made the sourdough blueberry muffins this morning (thank you!). My 12 year-old said "meh" and then ate two. Then my husband made (more) focaccia. Our freezer and pantry are pretty well stocked but since I needed to go get anything I would need from my office to work from home for "the foreseeable future" (I took all my photos, kettle, headphones, and the half a bar of dark chocolate I had in my desk drawer) I stopped by the grocery store for hamburger, hot dog buns (don't ask), beer, and potato chips. And whatever else made it into my buggy. Living off carbs and boxed wine. And this is our spring break...

We have been doing surprisingly well. Our immediate neighbors have kids around the same age, and we agreed to strict social distancing from everyone except each other. Having buddies and the ability to move between the two backyards seems to be working for all of us. And since it's our spring break, I'm not implementing academics until next week. Home projects were getting done and everyone was happy. Until I made a massive error and was super lax about bedtime last night. My 5 year old has spent the day terrorizing the rest of us, and my 9 year old barely holding back tears. They are both tucked in to bed an hour early, and I am anticipating a much better day tomorrow. Lesson learned.

Oh man. I feel all mixed up and weird too. I keep thinking I’ll wake up and it will have all been a bad dream. Social distancing is not great for my mental health, as important as I know it is for the community.
Miraculously our daycare is still open. Our toddler is solidly in the terrible twos and OF COURSE it hits right now. The other night she woke up at 4am plaintively asking for butter??

I don't have the space for stress-baking, so I'm stress de-cluttering. Mostly because we are getting our house ready to sell after living her for 10 (!!!) years. With 2 smol kids and their toys and a hoarding husband, we got some STUF. I've finally hit that get-rid-of-it-no-sentimental-value-here stride so I'm like CLUTTER BE GONE. I NEED TO SEE BARE WALLS. Standby for the Garage Sale to End All Garage Sales.

Please please please tell me that those shoes are still available somewhere I can purchase them?

Do you have a drive in theater near you? In Washington State they're exempt from the everything is closed edict. I took our kids two nights ago where Onward and Call of the Wild was playing. It was special and fun, and the kids loved it. I paid for it yesterday because they were exhausted and crabby (previews started at 7:30pm, we got home after midnight), but they had a lot of fun and we were completely socially distant.

Oh, the Band's Visit was so fabulous. If you have to wait to see it, listen to the soundtrack. It's beautiful. And Onward will be on Disney+ on 4/3!!