Last week, Jason splurged on mail-order cheesesteaks from Pat's. He wouldn't tell me how much they cost, told me to stop asking, and mumbled something-something about the "priceless" experience of giving our children their first authentic taste of Philly during a lockdown. 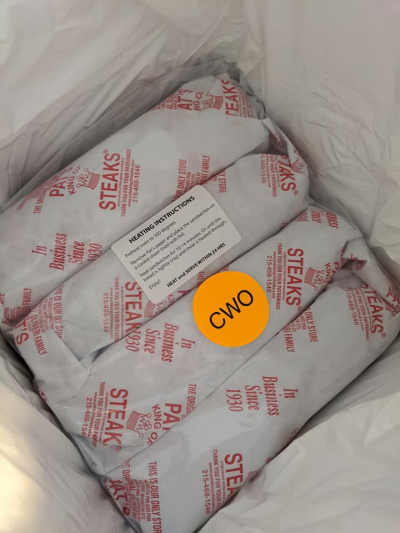 It's not just a cheesesteak, it's world culture! Geography! Social studies! We're EDUCATING them over here, okay? 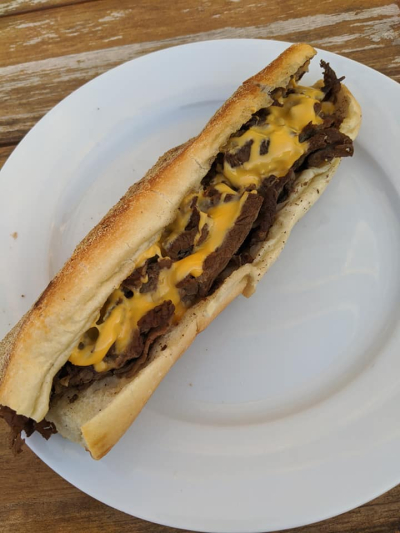 (Or in the local language: This is a Homeschooling, Whiz Witout.)

We ate cheesesteaks for dinner two nights in a row, and the kids begged us to order them again, immediately.

I, the killer of joy and fun, told them no. These were a fun treat, but too expensive to be a regular thing. When we can, though, we'll take a trip to Philly and go to the actual restaurant! Maybe do a taste test with Geno's and Jim's! Wow, remember when we could just...do things like that?  But never...did? Gah. Anybody not gonna finish their cheesesteak? Can I haz it?

Jason, who is basically surviving this experience one ambitious Food Experiment Project to the next, was all MY CHILDREN DEMAND CHEESESTEAKS. BY GRABTHAR'S HAMMER, I SHALL DELIVER CHEESESTEAKS.

He worked all week on perfecting the rolls and tracking down ribeye and Cheez Whiz. The ribeye was easier (a local butcher offers delivery), but apparently Cheez Whiz is a super hot commodity in These Trying Times, which gurl. I feel you. Sometimes you just gotta put some Cheez Whiz on all the things.

Eventually, the planets aligned and cheesesteaks were made. 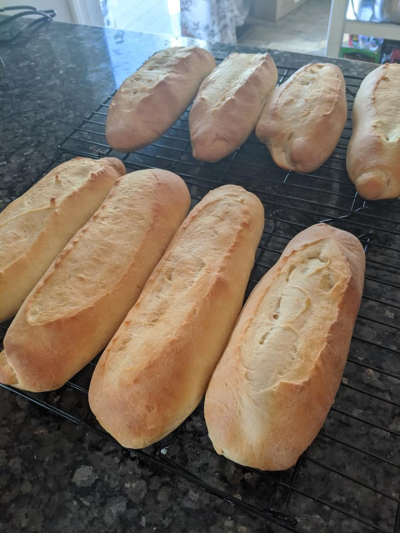 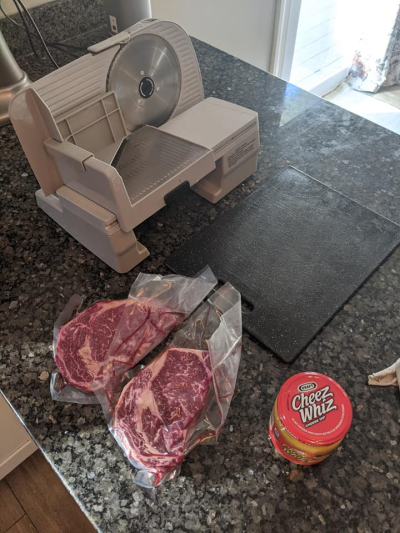 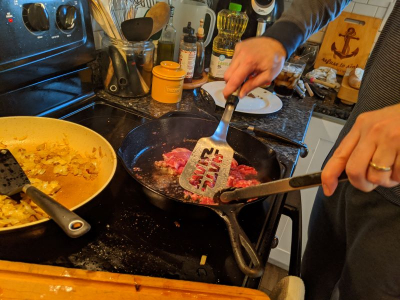 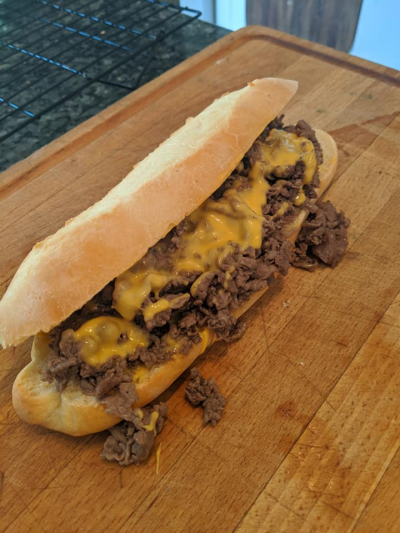 And lo, they were very, very Good.

(Oh, so the MEAT SLICER. Ages and ages ago, Jason was invited to a friend's party where everyone smoked their own bacon. Which sounds...dirty now that I type it but no, they literally all showed up with raw slabs of pork belly and made bacon. That's it. That's the party. ANYWAY. Jason came home with this massive hunk of bacon and couldn't find any deli or butcher willing to slice it for him. So he...bought an entire freaking meat slicer. He used it exactly that one (1) time to slice what ended up being the World's Most Expensive Bacon, and I've been telling him to sell it ever since, because again: Me. Killer of joy and fun and very large useless appliances taking up shelf space.)

(He did not sell it. He was very, very smug about that fact this week. I bet he'll be less smug at his next cholesterol check, though!)

(I love you, baby. Now please eat a vegetable.) 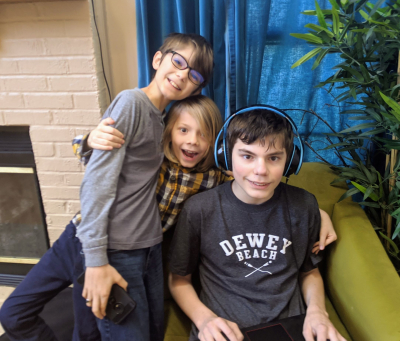 Also all very, very Good. I hope y'all are too.

My hubs is equally smug about his years ago purchase of hair clippers. Guess what he just got to use.

As a Philadelphian who grew up in nearby Jersey, I love everything about this post. A lockdown without cheesesteaks is no way to live. Jim's actually had to close recently because, IIRC, an employee's family member had coronavirus and nobody wanted to take any chances. If this keeps up we're all gonna be needing our own meat slicers soon.

OMG Noah has become a YOUNG MAN. When did this happen!?!?

We're making bagels .. and I want my bread slicer I've been begging for! I'm jealous of your meat slicer and so glad you are all surviving, any way you know how. Fingers crossed for your job to start soon ...

I love this post because it's like reading something in a foreign language where I can kind of understand the sort of concept, but am definitely missing the nuances... I'm British, living in France and I have spent precisely one week in the US (a really fun week in NYC in April 2001). I have no idea what a "cheesesteak" is (steak with cheese on it?), nor "Cheez Whiz" (one of those oddly fascinating American "cheese" concoctions, like the cheese-in-a-tube thing?)... and I cannot imagine ever owning a meat slicer (I'd undoubtedly slice multiple fingers off if I tried using such a thimg"). But it's all fascinating to read...

I shouldn’t have read this before lunch. I went to Pat’s website and then to its delivery service, only to find that they are now sold out through May! Oh, the humanity! At least now I know what Whiz Witout means.

I'm sorry, but this is not a real cheese steak. Cheez Whiz if for tourists on South Street. Real Philly cheese steaks are made with American cheese. White, not yellow. There is no other way.

This is the kind of content I'm craving. I've never purchased Cheez Whiz before but not at all surprised that it's hard to find.

Is it literally just melty Cheez Whiz? Or do you do something else to it? I want to try it!

God those look so good! Also, Jason is Kramer.

Oh, Joanna bringing the Philly controversy to the thread. 😂.

Go to Jim’s or John’s Roast Pork. There, I said it.

Fuck I miss that city. Moved away in February. I would even eat Pat’s if I could right now.

If I'm being honest, it's the Galaxy Quest reference that really made this post for me.

Dammit! Why did you do this to us? I never even knew this was an option, and now you've got me debating the wisdom of spending $99 on cheesesteaks -- and I don't even eat meat (except for cheesesteaks, I guess)! Also, I have to second Joanna. I grew up in West Chester, PA (Philly suburbs) and I've never in my life had a cheesesteak with Cheez Whiz, nor was it even an option on the menu. White American is the only cheese I've ever seen in a cheesesteak. Also, mushrooms are key.

I literally am writing this from South Philly (well, Bella Vista) and no. Cheez Whiz is correct; neither American cheese nor mushrooms (ye gods) are. Fried onions are also correct but optional.

Just reading this post made my cholesterol go up! 🤣

Okay, the rolls also look amazing. did you guys make those yourselves? If so is it a recipe you can share? I have been trying to get a good roll for sandwiches like that since mid-March. Otherwise, as always, you guys are all amazing!

I love your blog, and think you're great. But I do wonder - your family seems to love animals. Yet you eat meat with no apparent guilt. I'm not an animal lover, but I'm vegan just because I think the meat industry is immoral. And it always baffles me that people who can be so loving towards cats and dogs care nothing about other animals who have the same ability to feel and sense and love. Anyway, this post was just too much for me, I guess, in juxtaposition to how amazing you guys are with regard to animals who aren't considered "food" in out culture.

We also have a meat slicer that has been used exactly once and I BEG my husband to put it in every garage sale. I'm seeing Philly cheesesteaks in our future! Also, is that a Star Wars spatula?????? WHAAAAT? I must find one immediately. :)

I was introduced to Jim's South Street the first time I visited Philly and girl, I get it now. I couldn't understand the cheesesteak love until then.

Meanwhile, I spent 16 years living in Maryland, came up with a fine crab cake recipe that was part tradition, part heat, and in these lockdown times, I have people telling me they are dreaming of those crab cakes. Alas, I can't eat them because mayo and breadcrumbs are no longer consumables for me. (and Old Bay? The fucker has cayenne pepper hiding in it - so skin lesions from it, damn it!)

I love this post. I'm a Philly girl born and raised. Still live here. When you make your trip you need to try Steve's in Northeast Philly. Much better than Pat's or Geno's. We only go to those places after a Phillies/Flyers/Sixers/Eagles game. And that's just because everyone else goes so its like a tradition. I do have an 8 year who won't even try a cheesesteak. We're don't know where he came from lol!

seconding the recipe request! especially for the bread but all of it would be *chef's kiss*

Another mail-order deliciousness I've been meaning to try is pizza shipped frozen from Lou Malnati's in Chicago. We visited last summer and had it in person, and Oh. My. God. You've never tasted pizza til yo've tried this.