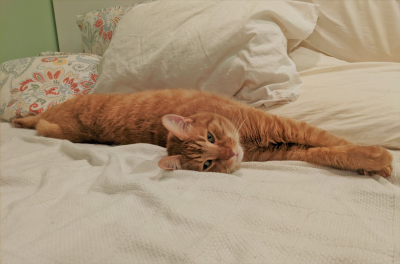 Guess who got adopted today!

This morning, I coaxed his royal highness into our cat carrier with the promise of some treats, then slammed the door shut a split second before the SHEER BETRAYAL fully registered. After a 10-minute car ride of HOWLS and WOE -- followed by orange-cat love at first orange-cat sight in a very nice man's foyer (we both wore masks, like supervillains) and a few exploratory laps around the joint --  he's now settling into a much more peaceful, well-suited home as an Only Cat for an Only Human, where he shall be loved and spoiled and be hereby, forever, known as Toasty.

The boys had a hard time saying goodbye this morning, especially poor Ike. A successful adoption always manages to be the most rewarding part of fostering and also totally the worst. It's definitely disorienting to look around the house and just...not see that particular little creature around anymore. They're just...gone. But not really! But also, yeah, because we'll likely never see him ever again. But also, yeah, that's the entire point.

If it weren't for Ike, I'm not sure this cat would even be alive today. He was destined for an overcrowded city shelter after being abandoned at a walk-in animal hospital when a vet refused to euthanize a young, healthy cat simply because the owner was "done" with him. The hospital was desperately looking for a rescue to take him, and had put out a final plea right around the time Ike asked us to foster a cat -- and very specifically, an orange cat.

Oh nooo, Ike's figured out the foster home loophole in the "no, we're not getting another cat" argument.

We did consider keeping him (you always consider keeping them, at least for an indulgent moment or two), but it was clear that he was pretty stressed out here. The constant two-against-one dynamic of bonded dogs and bonded cats meant he was kinda the odd man out, always on edge that someone was going to bark at him or chase him or steal his food or just get up in his face when he didn't want anyone up in his face. It wouldn't have been fair to keep him, but we were still happy to have him. He's a very good cat. I think he'll now get a chance to be the best cat, in the right sort of home. 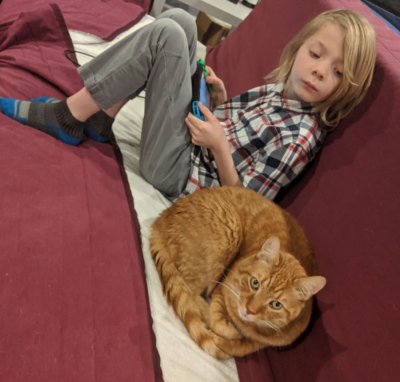 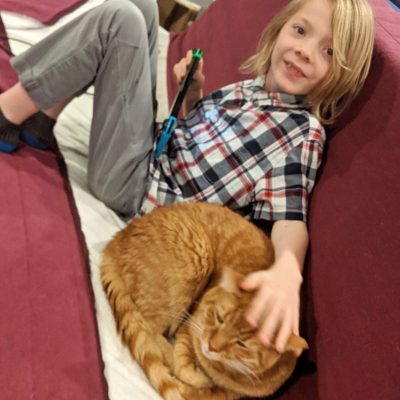 I'm happy but sad too, but also super, duper proud of you. You're a good little human.

Good luck, Orange Cat!
Fostering is awesome, and awful, but mainly awesome. Thank you for giving him his last change and his new beginning.

I guess this means I should end my campaign of hounding everyone I know to adopt this goodboi (even though I live in California and it would be SUPER impractical). I am so glad he found a home that is a bit more suited to him.

Thank you for this post. Reading your blog has been a solace for me during this difficult time. What a wonderful description of fostering!

I too adopted a big orange cat from a multiple kids and animals situation.

He was the BEST cat and got me through some tough times. After he passed away, I believe he even sent another to look after me.

Happy/sad tears. So much empathy in those boys of yours.

What a skill for Ike to be able to identify and name those feelings! Most of us could stand to practice more of that. Thank you for sharing stories of your sweet boys.

Ike did a very good thing. He should be so proud of himself.
I've been a bit quiet. We've moved from hot for 13 months out of 12 Florida to the cool north Georgia mountains. Been here almost a week now and I have ZERO regrets! Hope you are all doing well.

*Love* You did good, especially Ike.

I just had a short but intense happy/sad cry too - I guess I needed it. Enjoy your writing. The first post of yours I read was when your stove top welded/blew up. One of the funniest things I've ever read - mostly because the very same thing had happened to me in my mom's kitchen - dear god!

Toasty is such an awesome name for thus cat!! Thanks Ike!

Aw, Toasty is a cute name! Something about a nice older man living alone having him just makes my heart and eyes fuzzy. Did he tell you he'd send you updates? Any Jake updates?!