Our school district finally started distance learning this week, and I can already confidently report that there is exactly the same amount of "learning" happening now as during the previous four weeks, which is to say, NOT MUCH, BOB.

Instead, it's mostly kids getting distracted by their own faces and each other's pets on video calls, teachers struggling to unmute their own microphones, and super-challenging homework assignments like "practice writing an email" and "watch this video and then comment with the answer to the question I ask at the end, and/or just type the same answer that 30 other students have already commented with."

(Two. The answer was two. I didn't watch the whole video either.)

On Friday I got the (not entirely unexpected) news that the already-very-slow badging process for federal jobs has officially slowed down even more due to...well, you know. All Of It. So the timeline for Mah New Jerb has been pushed back from "I dunno, hopefully soon" to "I still dunno, but probably later."

On Saturday my prepaid debit card from the unemployment office arrived, at least. So that's fun and humbling.

I took Beau to the vet yesterday, as he's managed to lick and scratch a mild skin allergy on his belly into a bacterial AND fungal infection. Our vet is open but keeps the doors locked now. You hand your pet off to a technician and wait in the car for a phone call. Food and medicines are passed out a window.

But then the door closed and he realized I was still on the other side of it, and I think the poor dog's brain just completely short-circuited and he flopped on his side and laid on the floor like a taxidermied goat.

While I waited, a technician unlocked the door and a couple walked out. They made it a few steps before the woman yanked off her mask and began to cry. The man left his mask on, but his eyes were visibly red and puffy. They had a leash. They did not have a dog.

I felt so terrible for them as they walked past a long row of cars, each with someone sitting inside waiting for our phone call, as we all struggled with the make-a-sad-sympathetic-face vs. stare-down-at-your-phone decision. What's the etiquette for socially distanced displays of grief?

They were parked right next to me. My windows were open and I heard the woman's sobs turn into a horrible, painful, primitive wail as soon as she sat down in the car. 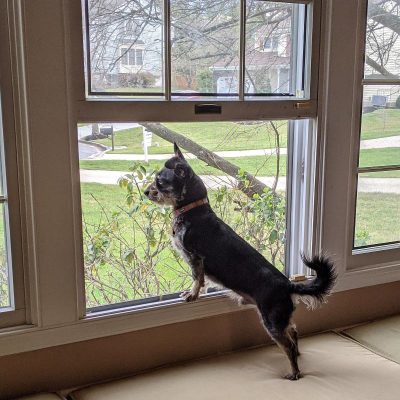 We came home with an allergy med, a special shampoo, and 193 fewer dollars in our bank account, but that's okay. 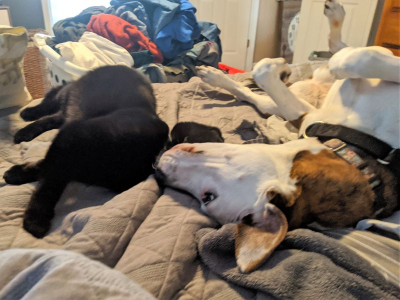 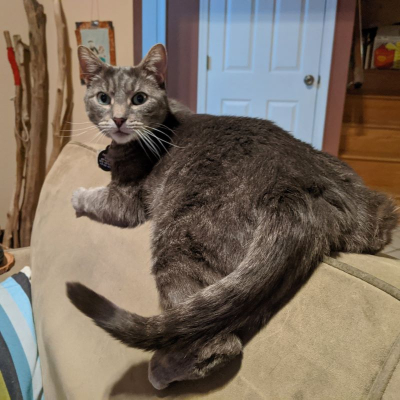 These floofballs are worth more than their weight in Netflix these days.

Oh, I've done that walk out of the vet with the empty cat carrier, trying to get to the car before crying, and it's so awful. If I had to do that right now, during All This? I would go crazy. I've already been telling Maggie that she needs to be fine, please and thank you. (She threw up twice the same day recently, unusual for her, and I gave her quite the lecture. Don't scare me!)

Wendy-Just Google how it is done, and decide for yourself. I was a solid NOPE, my husband tried it.....unsuccessfully. Maybe take him to the vet and watch ?? It does sound like your dog needs it. Good Luck !

I empathize with that couple. At the beginning of All Of This, one of our cats was so stressed she developed a severe UTI. Even after a huge dose of antibiotics and subcutaneous fluids, she was just done with it all and didn't have the strength to fight through. So first week home from work & school, and we lost our Sally cat. That made the quasi quarantine even worse. The vet said they were seeing a huge increase in stressed out cats with UTIs, I didn't know that was a thing before.
Also, our dog also loves the vet. She just loves anyone new and is always happy to make a friend.

@Dori: Fun fact: stressed out (usually male) cats can also get what is basically a fake UTI. Our male cat gets one whenever his boy (my oldest son) is gone for a few days. At least now that we know what the trigger is we can take steps (wet food and extra attention) in advance to minimize the situation.

@Wendy Solid NOPE on doing it ourselves, although I'm sure we technically could. We have a friend who was a vet and she's literally done it for us with a sheet of ClingWrap and some canola oil. Most dog groomers will routinely include it after a bath/groom as well. But in Times Like These I would still probably just take him to the vet if I saw him butt-scooting and lickimg. I have my limits!

@Dori I am so sorry for your loss. Poor sweet girl.

I think I read somewhere that Anal glands that aren't regularly expressed can cause health issues for dogs. Some do naturally when pooping, others need some help. Yeah it's gross and it can shoot sometimes, I do it for my dog though. Long yellow kitchen gloves help protect you and I prefer putting him in a tub for the process, also it's nice to wash my dog right after so we can rinse anything off from the expressing...you can't just squeeze, you have to kind of work it out. Once you get the hang of it, then it's not so bad...and boy does it save us from stinky dog butt being rubbed everywhere.

For some reason we've had a bunch of vet visits since all this started. Our vet does it the same way. Like you said, my bank account is empty, but my heart is full with these floofs.

I feel awful for that couple. I've had to do that a few times with my kittehs, and I just bawl like a baby. I don't care who sees.

We had to put our good boy down last year, and I almost wrecked my car sobbing while driving to pick my son up so he could come say goodbye. The crushing everything I felt having to make that decision and go through with it almost completely demolished me that day, so I can't imagine it now. I will send some love to that unknown couple today.

I’m sitting in my backyard and audibly gasped and sobbed for that poor woman and man. That’s just utterly heartbreaking. Thinking of her crying so hard and deeply...that’s so sad. I would’ve lost it upon seeing them walk out. I saw a man walk into our vet once and just hand over his (rather large) dog he’d been cradling and then walk out. I didn’t know 100% for sure what the reason was, but I started crying while checking out. Ugh. Horrid. 100% do not recommend.

ugh at least that couple got to go into the vet. my aunt just put her dog down today and had to hand him to the vet tech in the parking lot.

First time commenter - long time reader since my first pregnancy in 2013 (found you through alphamom). I’m currently 6 months pregnant with my fourth baby and am “homeschooling” my 7 yo and 5 yo as well as wrangling a 2 year old. My dog was ran over on March 27 and my husband and I had to bring him to the vet. Broken spine, dislocated hip and badly punctured lung. We put him down and your post today had me crying. This is the most awful year. Thanks for providing me with new reading material every few days. Your writing brings me joy.