I had to go to Target yesterday to pick up a prescription, but first I had to wait out a fucking tornado warning.

The kids gathered up the cats and their stuffed animals and hid in the basement, later declaring themselves incapable of doing any chores or online learning because they were too stressed out over the tornado, which did not actually materialize in our area.

(I know many other parts of the country were not so fortunate yesterday, but forgive my children's naive, sheltered privilege; they don't read the news, don't want to hear about the news, and keep stubbornly insisting that "the coronavirus is going away on April 24th." They should probably be on a presidential task force by now.)

Anyway, I left for Target after the tornado warning expired, but forgot about the severe thunderstorm warning that was definitely still in effect. 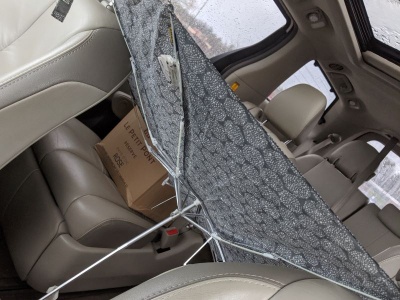 (The saddest part of this photo is that box of rosé wine does not actually contain any rosé wine. Or wine of any kind! It is empty, like my sense of purpose and meaning and whatever the fuck day it is.)

I've had to go the pharmacy twice this past week, and I did not like it. I did not like it at all! Our Target is now an uncanny valley version of itself, where things seem mostly normal and yet totally not normal at all. The bread aisle was full but the toilet paper aisle remained completely empty. I could get all the enchilada sauce and mini marshmallows I wanted but no chicken or pasta. A little over half of us wore masks and/or gloves, but not the guy who made steely eye contact at me while defiantly piling six cartons of milk into his cart directly in front of the TWO PER CUSTOMER sign. The pharmacists seemed really stressed and somber while the worker tasked with sanitizing the self-checkout line equipment and keypads remained at SNL Target Lady-level high spirits and have-a-great-day-ness.

An Instacart order we placed a week ago finally arrived, including one miraculous six-pack of store-brand toilet paper. Our shopper texted us from the line outside the store, since they've imposed limits on the number of people allowed inside at a time. I realized Jason had left the default tip amount selected originally and furiously scolded him. MAX TIP THAT HERO, IT'S REALLY WEIRD OUT THERE.

Stress baking recommendations of the week: Pumpkin sheet cake with cinnamon cream cheese icing (I halved the icing recipe because I only had one package of cream cheese; it was perfect), sourdough crackers (with Trader Joe's Everything But the Bagel seasoning), and Ruby Tandoh's brown butter madelienes.

Thank you for the stress baking recommendations! I have been doing it so much that I am in danger of running out of all-purpose flour and light brown sugar - and they are never in stock, even when I can get toilet paper. I have started doing more recipes that call for whole wheat flour (https://www.kingarthurflour.com/recipes/100-whole-wheat-blueberry-muffins-recipe - better with buttermilk than yogurt, and go heavy on the blueberries) or oatmeal (https://smittenkitchen.com/2008/05/crispy-salted-oatmeal-white-chocolate-cookies/) just to make the all-purpose flour go a little further.

(FYI, for some reason, your oatmeal post is pinned at the top? Did not realize at first that there were new posts.)

Everything is so weird now.

Where are you getting the flour for this stress baking? We are rationing flour because I've been able to buy one bag this month. One.

@Cara I do know our flour secret! Jason ordered 50-pound bags of flour (King Arthur Sir Galahad AP and Artisan Bread) and GIANT CONTAINERS from a couple different bulk foods/restaurant supply sites. They took awhile to get here but we are now sitting on over 100 pounds of flour. (We were already pretty well stocked before this all started with like, every other flour variation on earth, so I have a lot of swaps to experiment with.) We are happy to share and barter with friends/neighbors, but Jason was done messing around with the flour shortage bullshit.

In the past three days I have made lemon pound cake, lemon drizzle cake, sourdough bagels (fail), cherry pie, and 2 dozen meringues. I am taking a day of from stress baking so I can stress eat all said baked good, but tomorrow seems like a good day for sourdough crackers! Thanks!

This doesn’t have to do with *this* post, but THANK YOU for the Mason jar cold brew link a while ago. I bought the 1 quart then quickly went back for the 2 quart also. We use them both All The Time. My college son is home now (mixed blessing...for both of us) and the cold brew is our bonding ritual. We love the bourbon (yet not alcoholic, idk how, but we drink it for breakfast!) beans from a place here in Seattle -amazing!

Anyway, thanks for the rec- I’ve even given two as gifts already. I have tried a few different cold brew methods before (including buying OXO’s ridiculous contraption) and nothing else worked for me. This is a winner!

Hopefully at checkout, he had to give up the extra milk. At walgreen's yesterday, they had a buy one get one half off sale on Ibuprofen. The advil brand said limit one, but the walgreen's brand didn't so I got two. The cash register wouldn't let her ring up two, turns out even store brand was limited supply. So hopefully he got the same treatment.

There really should be no limits on milk purchases. There is plenty of milk. In fact, dairy farmers are being asked to dump their milk right now. It is very sad living here in Wisconsin. There is actually a website to report any limit signs that are seen in grocery stores, but I can't find it right now. I just heard about it on the local news at noon.

We got 5lb flour from our favorite local bakery for pickup with our bakery order. Maybe it's worth a try?

Thank you for validating the weirdness of our world's current state. It's weird for all of us, and calling it like it is makes it somehow a little less weird.