We had kind of a Wild Animal weekend, both literally and figuratively. First, a fledgling baby bird appeared in the hedge outside our front window. 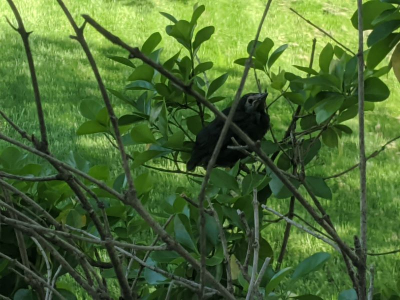 And I, being both an idiot and absolutely desperate for outside entertainment and distractions, immediately called all the kids over. After about 75% of the words "HEY GUYS WHO WANTS TO SEE A BABY BIRD" came out of my mouth I realized what a potentially grave error I'd made.

Yes, children! Come get invested in this small, pathetic creature's fight for survival! Come see firsthand how cruel nature can be!

(Last night at the dinner table, Ike offhandedly said something about how 400 whole people have died of coronavirus. His brothers were like, yeah, but don't worry, children don't die from it! Children and babies are totally fine! Then everybody looked at us, the fully adult grown-ups in charge, because that's right, Mom? Dad? Isn't that right?  Jason and I just sat there with mouths full of meatloaf staring at each other and mentally playing a game of NOT IT NOPE NOT IT.)

Anyway, the bird did survive the night and by the next morning was hopping from branch to branch and taking short little flights back in the direction of his nest. (The mother bird was always hovering nearby with worms in her beak as well.) At some point we didn't see him anymore but feel reasonable sure that he's fine and flying on his own and being every bit as annoying as his large and screechy extended family, who all live in our trees and make a terrible racket.

Or, you know, he's fox food. But at least we didn't see it happen, or find the evidence anywhere, unlike the Great Flattened Driveway Toad Incident of 2019.

That very night, Poppy spotted a fox in our neighbor's yard and jumped over the fence to chase it, leading us on a late-night chase after HER around the neighborhood. Maybe she was jus tryin to protec the babby birb?

(We have an electric fence -- set to beep, not shock, Poppy's a sensitive soul -- but it stopped working after an unfortunate run-in with either our lawnmower or weed whacker last week. We haven't been able to pinpoint where the connection is broken. 99% of the time, Poppy still respects the boundary and her training but oh, That Damn Fox is absolutely irresistible to some primitive raptor part of her brain.)

I finally found her running around in a complete WHAT DO I DO WHAT HAVE I DONE panic in a neighboring cul de sac and brought her home. She was very sorry. Also muddy.

And then! That very night! Again! This one fell out a window! Again! 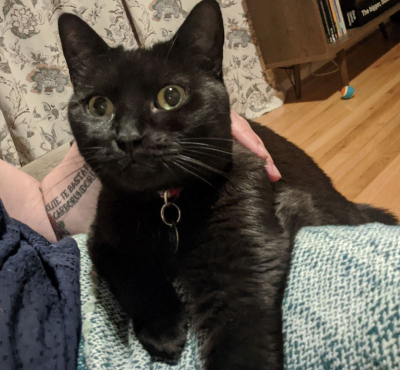 We had no idea until the next morning, when we came downstairs and found her sitting outside one of the back doors on the deck. Apparently she'd been lying on a windowsill and the screen popped out and her tubby ass just rolled right out and landed in the yard. She was very, very displeased with the whole situation, then probably forgot about it completely after breakfast.

Dear Pets: Please educate yourselves. Read the news. There's a pandemic. YOU NEED TO STAY HOME.

My outdoor cat caught a baby-ish rabbit this weekend--we tried to save it ourselves but should have called a rehabber immediately. By the time I called one it was too late (cat puncture wounds get infected like 100% of the time) :(. Then dumbass cat got treed by something (dog, coyote?) 40 ft. up a pine tree with no limbs between where he was perched and the ground. Oi. Almost had to call a tree service to get him down, but miraculously he made it to the ground VERY CAREFULLY (backing up ass end first) while me and my son moved around with a blanket to catch him if need be. He's down one claw, but other than that is ok. I do not need any more animal related drama in my life, thank you very much.

You have to put on your summer ToDo list: find sturdier screens. Lol

Open window? They open?? Here in WI, we switch from heat and a/c on the same day. Right now, we're still in heating mode. Sigh. With Safer at Home and the freaking rain everyday, it's getting desperate here.

At least it didn't fly into your screened in porch (which is always open because you are procrastinating in getting a door with a dog flap) and be chased around by your dogs until the small one catches it in its mouth and you have to fish the dead baby bird out of it so it doesn't choke.

That may or may not be something that happened over the weekend.

Would like to know which adult responded at dinner table and what was said? Because at least two and probably all 3 of your children are old enough for truth. About this disease. About the racial issues in this country and racial composition of the world. About science. About history. About hate and bigotry. About how baby animals can die. About any question they may raise.
PARENTING IS REALLY HARD but allowing children to grow up ignorant doesn't help.
Please note: I asked how you moved forward on the topic of this disease, who is impacted, how many are dead. I do not know your specific 3 sons personally; perhaps there are reasons for some of them to be more sheltered than those children who have lost parents, grands, siblings, friends to this disease. I don't know. I also do not know if, for reasons, you need to talk to each child separately about the topic. I am not judging. Parenting really really is tough.

Rose, are you a regular reader? Amy has been very open about her kids' diagnosises. As a fellow mom of boys with autism and children with anxiety I can tell you that "old enough" is very relative. I actually have had some of the conversations you mentioned with my kids (10 and 8) because we regularly discuss issues of racial and economic inequality. That being said I have absolutely sheltered them from the worst of the news because their mental health is more important right now (and I do realize that being able to do so is a privilege) and they can't do anything to fix what's happening. Like all of us Amy and Jason have to do what they think is best for their kids right now; fixing ignorance can wait.

I don't know Kate. We do a disservice to our kids by not telling them what is happening.

My oldest is nearly 14 and is diagnosed with ASD level 2, severe anxiety and depression. He knows all about racial divide, poverty, religious tensions, politics. He learned about all at home and in his school.

My 11 year old is NT and knows all about coronavirus as well. She has an understanding about other issues.

My 5 year old is diagnosed with ASD level 2 as well. She knows about the virus and how it has caused deaths worldwide, including her grandfather.

They all know so they know how to protect themselves and why it's so important to wear a mask or wash their hands. Its dangerous for them and others if they think the coronavirus cannot hurt them.

I had the same baby bird experience you did. A sweet lil fledgling was in the tree outside our living room and mommy bird was bringing him worms and encouraging him to spread his wings and get out there. I even took a video of it because it was SO sweet. Later that day my husband came home and let the dog out. Mere seconds later he came back in with her and said "The stupid dog killed a bird." My heart sank and I said "Was it a baby robin?" He said he didn't know but he had thrown it over the fence. It was my cute little baby birdie. I cried and yelled at the dog. Stupid mother nature. :( (Sorry for the downer comment! It's been that kind of a week for me.)

Mom24:" They all know so they know how to protect themselves and why it's so important to wear a mask or wash their hands. Its dangerous for them and others if they think the coronavirus cannot hurt them." THANK YOU.
Kate: I have been reader for a LONG time. I asked about the ultimate response from the adults. I pointed out different children need different responses at different ages. I said these are tough hard problems in parenting. I did not say they parents had not handled it correctly at all!!! I ASKED HOW THEY HANDLED IT and tried to say why I was asking.
BECAUSE THESE ARE TOUGH CONVERSATIONS.
Because I think A and J DO A VERY GOOD JOB at tough conversations with their kids. Strong role modeling on such topics is helpful just as knowing other parents are facing the topics with their families helps.
AMALAH: I hope you read what I was intending and did not feel in attacked. If you did feel attacked, please know that was not my intent and I will try harder next time to be clearer.

One of our greyhounds caught a rat a few days ago. Yes, a rat. Gross. It managed to escape and hide under the car in the driveway. So gross. The next morning, it was gone, thank God. (We worry about rat poison, and the dogs ingesting it secondarily.)
I am grossed out about the rat, but that is life in an older suburb.
(I just read over my comment and see that I used the word "gross" three times in four sentences, which is a lot, but I'm leaving it. Because rats are gross.)

Oh man, when even these peaceful comments have a small fight --- we have been home too long. We talk about racism, COVID-19, who is bringing the packages, etc. --- all with the children. But we HAVE emphasized that children are safe, and then now children are sick ... and even dying ... and I'm not sure I would have quickly swallowed my meatloaf and jumped into that.

Sweet baby bird, sweet Poppy, sweet chubby cat --- thanks for your excellent and peaceful and righteous and just corner of the internet.