I hope everyone is doing okay. It's been a lot. We had a long talk with the kids about what's happening right now and it resulted in everybody bursting into tears at the dinner table so I don't know if that means we did a good job or a terrible job.

Either way, they know his name. George Floyd.

/awkward transition back to the usual navel-gazing inanity

Hey, speaking of jobs. Remember that job I accepted in March? And then finally got my badge for in May? Did you think I actually started that job, or something? Surely I must have started that job by now, after all this time, right? No?

NO. I did not start that job.

(Amy...does this job...exist? Does...anything...exist? OMG, Amy, is your whole online life nothing but an elaborate decade-plus fantasy built off photos you're stealing from someone's old defunct MySpace page? HOLY SHIT.)

Anyway, the very last step involved getting a sooper secure and speshul government laptop. Due to...well, YOU KNOW, EVERYTHING...the laptop would be shipped to my house vs. issued in person. When would it be shipped, exactly? Eventually, perhaps. At some point, maybe. Who can say for sure, when one is shipping expensive pieces of electronic equipment via the postal service? It's not like one can magically "track" a package with a bunch of magical "tracking numbers" or anything, you heretic witch.

While I was waiting on the Mythological Laptop, one of my freelancing clients -- the same client who ran out of work for me back in February, which is when/why I hit my breaking point with freelancing and decided to get a full-time job instead in the first place -- reached out and asked if I was available to do some work for them. Sure! Why not! It'll be nice to have some work (AND MONEY) coming in while I wait.

Of course, working for that company again involves another Whole Onboarding Process and another background check and drug screen, so I actually didn't formally sign all the paperwork until yesterday morning. It's a six-month, part-time contract. I start June 15th. Yay!

Guess what showed up on my doorstep last night? Yep, the laptop. I start on Monday. Eep.

So I'm going to be a little busy, for a little while.

(Don't worry, there's no conflicts of interest or NDA issues or any sort of overlap between the two. The part-time job knows about the full-time one and basically it's just on me to manage my time and Not Suck At Everything.)

(BIG SHOUT OUT & ADVANCE THANK U TO VYVANSE.)

Okay, time for some obligatory photos I stole from MySpace from this week. I admit, I initially tried to see if I could crop out the worst of the Quarantine Hair in this photo, but you know what? Who cares. It's also obvious that Noah's outgrown all his clothes and we haven't bought him any new ones yet because you know what? WHO CARES. 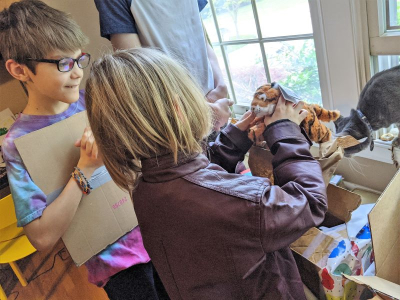 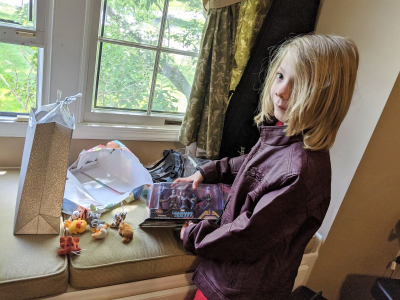 Ike requested a Starlord/Guardians of the Galaxy costume for his birthday, but since all I could find in his size was one from Avengers: Infinity War (WHICH IS A DIFFERENT THING), I impulse-added a $24.99 faux leather jacket that came up as a Starlord-related cosplay suggestion. It turned out to be the biggest surprise hit of the bunch. 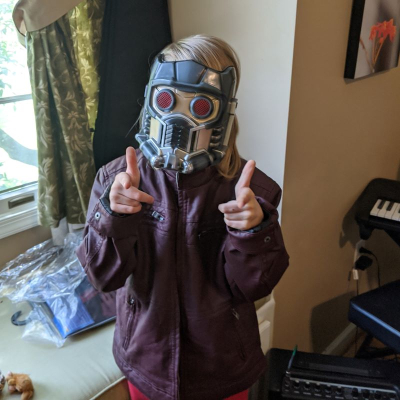 He has not taken it off since. It was 90 degrees this week and he WILL NOT TAKE IT OFF. 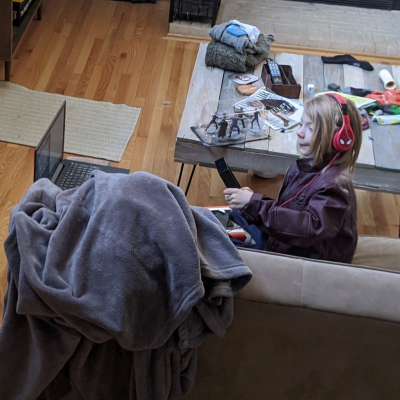 Zooming with his aunt and grandmother. Could I have cropped out the Museum of Unclaimed Socks piled up on our coffee table? Could I have cleared the area of Random Unfolded Bedding and Out-Of-Place Area Rugs? 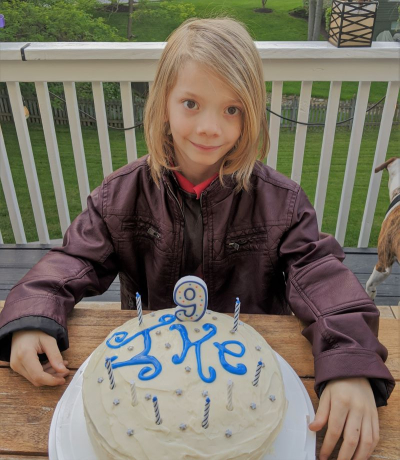 (He drew a picture of exactly how he wanted the lettering on his cake to look. He said I "nailed it" but considering he's a fan of that show I'm wondering, again, if that means I did a good job or a terrible job.)

Wow, it never rains but it pours on the old job front. Good luck with it though! Don’t be too hard on yourself about it.

Thanks, Amy. Your posts are a highlight of my day/week/month/year.

Oh please never run out of MySpace pictures, this is too good to end.

Good luck with both of the jobs (!!!) - I wish you nothing but success in this world!

Welcome to 9, Baby Ike (how he shall be known forevermore)! Also congrats on lots of work because MONEY and possibly a future. You give me hope.

As someone else who cannot be bothered to art direct photos, I appreciate your refreshing perspective on life. HBD to Ike and congrats on having some actual income. And good for you for talking about George. I think their response was appropriate.

All the hearteyes for these pictures and yay! You have work!

I am so proud of you for having the difficult conversation with your children. And you managed it all together despite the differences in age. Really impressive. Really really important that you had the first conversation of what will probably be many. I hope by the time your children are my (OLD) age their children and grands will only hear about this as remote event showing' how wrong some people were back in these old days'.
Voting is important.
Congratulations on finally getting your new job started. You will be VERY BUSY! I hope you will be able to come by here occasionally; we will be missing you.

Just to check though, the government job knows about the non-government job? I ask because we (Australian federal public servants) need rolled-gold, cast-iron, signed-in-triplicate approval before we can work an additional job, no matter how part-time. (We are very tightly constrained though, including in ways that would be inconceivable in the US - so it is possibly a completely irrelevant question!)

Oh man! Good luck balancing all the work. I know the struggle. I’ve been working contract jobs for the last couple years and not knowing what comes next & trying to get work but not knowing exactly when you’ll be available!!! Eek

Every time I post pics online I'm like ? Shoukd I edit out/Photoshop the mess I didn't notice? But NAH. Thanks for sharing your very real life.

And congrats on the jobs! I imagine it's a relief!