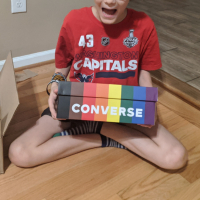 Ezra's always been particular about his shoes, at least compared to his brothers. For years his sneakers had to be red. Then they needed to be Under Armour and red. Then he went through a phase of preferring the "fancy" shoes we bought him for a school concert. (They were essentially just gray slip-on sneakers we found at Target on the way to school because shit! There's a dress code! Their closets are not stocked for dress codes!) Last summer he picked out a pair of Vans and has literally worn nothing else since. I knew they were getting small for him but he wouldn't even consider replacing them. Then, during his second or third re-watch of The Babysitters' Club on Netflix, Ezra fell madly in love with a pair of shoes. He wanted those shoes. He NEEDED those shoes. He rewound the episode to pause on a scene so I could get a look at the shoes. The shoes in question turned out to be a limited edition Converse Pride/Miley Cyrus Chuck Taylor high top from several years ago. He was a little disappointed, but asked if he could get a similar pair from this year's collection. I told... Read more →